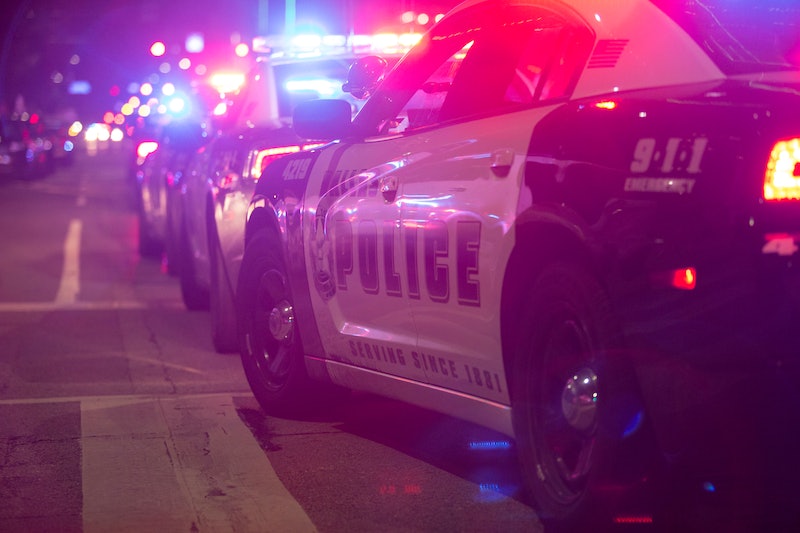 Police departments across the nation are in shock this week — but nothing like in Dallas, where five officers were killed by a sniper at a police violence protest on Thursday. So how are the Dallas police coping? That's exactly what NPR's Lynn Neary asked Dallas Deputy Police Chief Malik Aziz on Weekend Edition Saturday. Aziz is not only the DPD deputy chief, but also the national chair of the National Black Police Association. The group is "dedicated to promoting justice, fairness, and effectiveness in law enforcement."

The interview starts with what might be a very hard question at a time like this, "How are police officers in Dallas holding up now?" Aziz doesn't sugarcoat it:

Our hearts in Dallas are really heavy. The officers are trying to put one foot in front of the other. We're just greeting each other with, 'We're gonna get through this,' or, 'We're going to make it through this.' They're hurt. They're in a state of shock, of disbelief because they've lost brothers in blue, they've lost peers, comrades, they've lost partners and families have suffered a tremendous loss of husbands and sons and fathers and brothers. And so Dallas Police is in a state of healing with their hearts heavily broken.

Neary's next question has to do with what may change in Dallas after such a shooting. Police in other cities like Philadelphia are mandating that officers patrol in pairs of two. In Arizona they're being given the option of patrolling with a partner. As Radley Balko wrote for the Washington Post, some are wondering if public pressure will cause Dallas police — lauded for being leaders in the nation in community policing and deescalation — to be forced to backtrack. Echoing Dallas Mayor Mike Rawlings, Aziz said, "no":

Police, Dallas Police especially, but police across the nation that I've seen are very professional. Professional police forces, as Dallas PD, a very progressive police force and community engagement and community policing. I don't think that will change. Of course, caution will rise, concern will rise. That's human nature. And we adorn this uniform and this badge and have an oath to the State to protect and serve the citizens of this great city and the nation, and I think Dallas Police will do that, even with heavy hearts.

Neary quoted Aziz's boss, Police Chief David Brown, who said Friday at a press conference, "All I know is that this must stop—this divisiveness between our police and our citizens. We don’t feel much support most days. Let’s not make today most days." Neary asked "what steps can be taken to resolve the distrust and disconnect?" Aziz replied:

Our police chief David Brown is right on point. We know that this thing has to stop, that we must sit at the table. It starts with a police chief. It starts with city government. It starts with an open dialogue, and it starts with groups — even Black Lives Matter — or any other groups who wants to redress their grievances against the most visible form of city government, the police department. We must sit at the table and have an open dialogue with an understanding that our ideology or philosophy, that we may agree to disagree. So that's where it starts. We have to start with a real conversation with transparency that we're going to commit to making the city and the nation better, and that's where we're failing at.

But not Dallas, specifically. Said Aziz:

We have failed, police leaders. I don't think Dallas Police is a failed department or our police chief is a failure for community policing and community engagement. I think they're progressing and pushing the envelope. They're pushing it forward, but we need someone to meet us in the middle, or we'll try to go all the way to them. We'll find them.

Then Neary brought up the one group that has been keeping the pressure on police departments across the nation, Black Lives Matter. Neary asked, "Do you think you could work with the Black Lives Matter movement? Or how do police feel about that?" Aziz responded:

The Dallas police may not be back to normal for quite some time, but it's heartening to hear the hard work they've put in to being a national leader on non-violent policing, deescalation, and community engagement. Conversations like this can make sure that isn't lost in the fallout of Thursday's attacks.

More like this
What Is Happening With Sheku Bayoh’s Case?
By Sophie McEvoy
The Most Powerful Photos From The Weekend’s Abortion Rights Protests
By Melanie Mignucci
Police Shove 'Full House' Star Jodie Sweetin At An Abortion Rights Protest
By Radhika Menon
Every Single Big & Small Way You Can Fight For Abortion Rights
By Tess Garcia
Get Even More From Bustle — Sign Up For The Newsletter