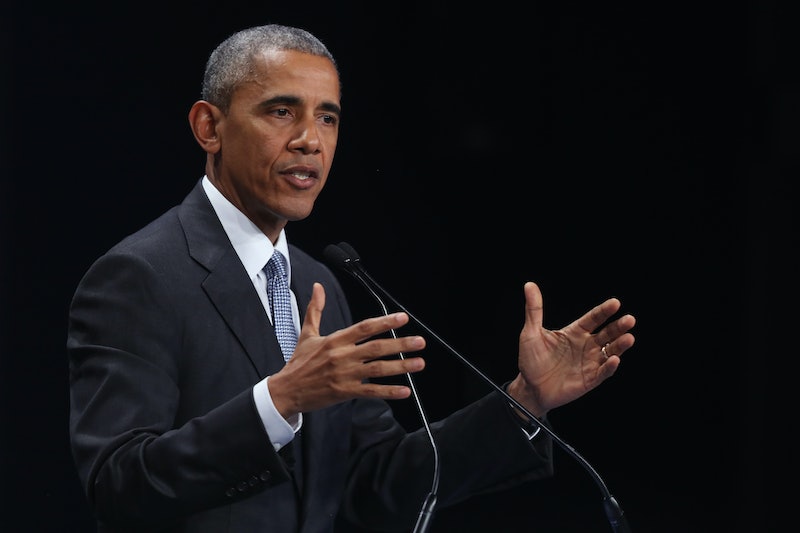 President Barack Obama had more to say about the Dallas sniper attack on the city's police — and you need to hear it. This is the third time Obama has spoken from Warsaw, Poland, in as many days. He's there for a NATO summit meeting, but the events back home keep taking precedence. He spoke out Thursday about the killings of Alton Sterling and Philando Castile; while on Friday, it was the deaths of five officers in the sniper attack. Today, it's the country. The president admitted it was "a tough week," but Obama added that "America is not as divided as some have suggested." He explained why:

Americans of all races and all backgrounds are rightly outraged by the inexcusable attacks on police, whether it's in Dallas or anyplace else. That includes protesters. It includes family members who have grave concerns about police conduct and they've said that this is unacceptable. There's no division there.

He's totally right. There have been some strong words said, and that's problematic. But by and large people who are outraged by the police attacks are also outraged by police violence. Obama said Americans of all stripes are "saddened and angered" by the deaths of Sterling and Castile too. He's right; Americans are upset by the unfounded loss of life on all sides. This is not the beginning of some period of increased violence. Rather it is a sad reminder that our work toward a more just United States for all Americans is not finished yet.

And that can unite us, according to Obama:

There's unity in recognizing that this is not how we want our communities to operate. This is not who we want to be as Americans. That serves as the basis for us to be able to move forward.

Furthermore, we can take comfort in the fact that we are a nation of progress. This is not the United States of slavery, or the United States of Jim Crow. We have a new era with new problems — they're serious, sad, and difficult — but we keep moving forward. Obama reiterated that we've come a long way:

When we start suggesting that somehow there is this enormous polarization and we’re back to the situation in the 1960s — that’s just not true. You’re not seeing riots, and you’re not seeing police going after people who are protesting peacefully.

In fact, that's one the most tragic details of Thursday's attacks. The police were there not just to keep protesters safe, but it seemed that they supported the cause. Officers were taking pictures with protesters before shots rang out. The police worked with the protest organizers to coordinate Thursday's protest. That was not the case 50 years ago. From 1964 to 1971, more than 750 riots broke out in the nation's largest cities. More than 10,000 were injured and 228 people died.

Obama also pointed out that in many of the most recent acts of racial violence — save for the pattern of police violence seemingly targeted at black Americans, I would argue — it's just "a troubled individual" and not someone representing the views of a bigger group, whether that's whites, blacks, Muslims, or any other group of Americans. He explains:

I think the danger is that we somehow suggest that the act of a troubled individual speaks to some larger political statement across the country. It doesn’t.

In the end, what Obama may have achieved by being elected and speaking so elegantly on these issues is some greater understanding among Americans. He said that's been his goal:

More than anything, what I hope is that my voice has tried to get all of us as Americans to understand the difficult legacy of race. If my voice has been true, and positive, then my hope would be that it may not fix everything right away, but it surfaces problems, it frames them, it allows us to wrestle with these issues. I’d like to think that, as best as I could, I have been true in speaking about these issues.

He definitely has. Keep listening and fighting. Wrestle with them and find a solution. We have come a long way, and there's a long way to go.