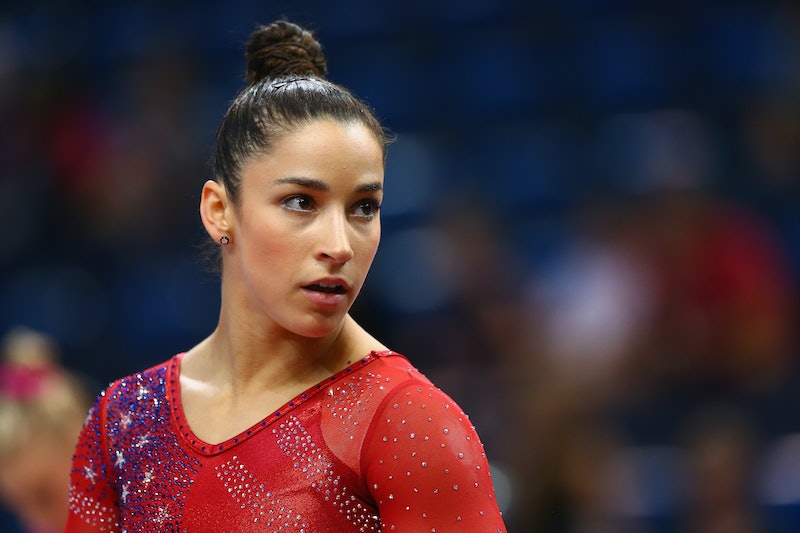 If you're a lover of all things Olympics, then you're probably already getting excited for the upcoming 2016 Summer Games in Rio de Janeiro. And if you're a fan of gymnastics, that most exquisite, often logic-defying athletic discipline, then there's a good chance you're already following one of the big, dramatic "what if" stories for this year's American team. Namely, whether you'll see the return of a very familiar face — the captain of 2012's gold-medal winning team, Aly Raisman, who tells Bustle that she's back, and ready for the challenge of competing in consecutive Olympic games.

Raisman, 22, starred on the exceptional, gold-medal winning "Fierce Five" gymnastics team during the London Olympics four years ago, netting gold in both team and floor competitions. Now, in 2016, she's got her sights set on an ambitious and rare goal: she's striving to be the first American gymnast to compete in consecutive Olympics since 2000, and the first ever to claim gold on both trips. As a matter of fact, one of her former teammates is attempting that same feat, too — Gabby Douglas is also fighting for a spot on the 2016 Olympic team.

If you're wondering why that's such a rare feat, it has everything to do with age, and the incredible physical demands of the sport. Back in 2012, Raisman was already the oldest member of the Fierce Five at 18, alongside 16-year-old Gabby Douglas, 15-year-old Kyla Ross, 16-year-old Jordyn Wieber, and 16-year-old McKayla Maroney.

So, is she feeling prepared? "I feel stronger than I did four years ago," Raisman tells Bustle. She cites a combination of physical therapies, essential rest and relaxation, and the intense amount of conditioning any Olympic-level athlete needs. In particular, she mentions the acupuncture technique of dry needling, saying "Besides, of course, my conditioning, I credit being healthy to dry needling, that has helped me so much."

"I also float in a flotation tank," she says, referring to those deep-rest inducing sensory deprivation tanks that have become in-vogue with athletes of all kinds in recent years. "It's like a pod, and you close it and you literally float in salt water and fall asleep for like an hour or so, that stuff is really crucial because you have to find ways to rest."

And, of course, figuring out what your body needs is key: "Finding nutrition that works for your body. Everyone is different. Doing lot of conditioning, and getting a lot of rest."

Raisman also credits a recent move with helping her balance the grueling athletic schedule with her family life. "I actually just moved houses and it's a nice little change," she says. "My backyard is really private and I've been able to spend more time with my family. Just finding little balances here and there is really key."

There's also the burning question that might be on a lot of people's minds, though — why another run at the Olympics, after all the training, and strain, and pressure, and ultimate success of the first time?

According to Raisman, it's a simple matter of personal drive, and a desire to accomplish something that no one else ever has. "I was 18 years old at the last Olympics," she told reporters. "I felt that I still wanted to try and do more in the sport. It's never been done before, for a U.S. gymnast to do back-to-back golds. So that's something Gabby and I wanted to try and do together. I've been trying to do it for myself."

Gabby Douglas, now 20, is also participating in the trials for the Rio Olympics, vying for a repeat trip to the biggest stage in the world. And according to Raisman, that process — of clearing the trials and getting onto the team — might actually be tougher than the Olympic competition itself. "I think that this part and the training camp is almost harder than when the girls get to Rio," she says. "This part and the training camp with Márta [Márta Károlyi, national team coordinator for U.S. Gymnastics] is more intense."

It's an intensity that both Raisman and Douglas experienced on Friday night — Raisman finished in third place, putting her in a good position to make the team of five, while Douglas suffered a fall off the balance beam and finished seventh. And they'll both experience it again on Sunday, with everything on the line. The second and final night of the U.S. Olympic women's gymnastic trials will be taking place on July 10, and it'll be airing on NBC at 8:00 p.m. ET.