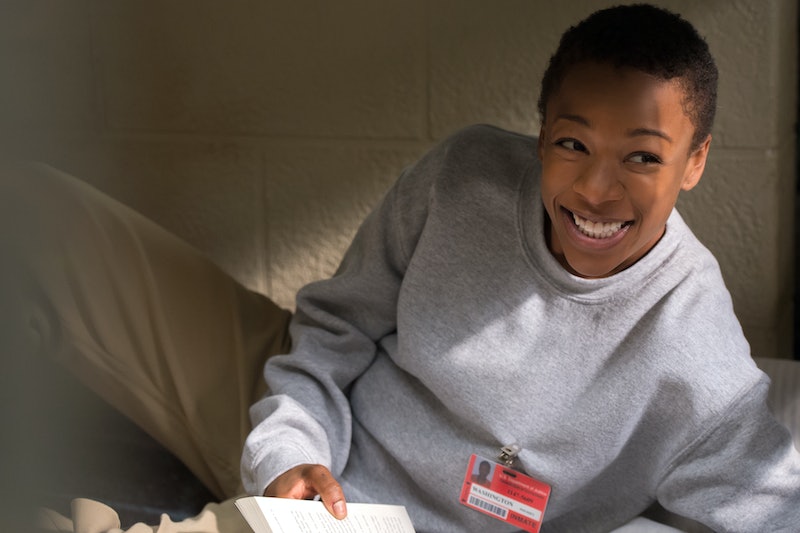 [Major Orange is the New Black spoilers ahead] The death of Poussey Washington at the hands of the inept CO Bayley was the biggest choice made by OITNB in Season 4. And, even though losing a fan favorite character is tough, I firmly believe that Poussey shouldn't return for more Orange Is the New Black episodes. I'm obviously not a member of the OITNB writers' room (I wish!), but I can see why they might be tempted to bring Poussey back through additional flashbacks, dream sequences, or even reusing footage from preexisting episodes. Additionally, the choice to have Poussey die wasn't unanimously praised. Several black writers and many black and LGBT fans didn't like the show's treatment of the Black Lives Matter movement, and, plus, Poussey is a popular character who's tough to lose from the ensemble.

And, while I think the Poussey's death worked dramatically, I also understand some of the points presented in its critique, particularly that the choice seemed designed to induct unaware audiences into understanding and sympathizing with Black Lives Matter, rather than assuming that the audience was already well-versed in the violence and brutality that's a part of many black people's lives. However, Poussey's death didn't turn me off from the series. Yes, it was disappointing to see the death play out in exactly the way it did, especially since the twelfth episode focused more on her killer, CO Bayley, than it did on the inmates, but we'll have to wait until Season 5 to ultimately discover if the show can handle the aftermath of her murder in a sensitive, knowledgable way.

That's part of why I firmly believe that Poussey cannot reappear. Don't get me wrong — her death should absolutely continue to echo throughout the series. When the finale pointed out that her father is a general, my first thought was that I desperately hope he is able to find justice for his daughter. Most prisoners or ordinary civilians wouldn't have the ability to find out exactly what happened, which was demonstrated when Crystal Burset was unable to find out why Sophia was being held in solitary confinement for weeks. But a high ranking member of the U.S. armed forces could possibly have the resources and the influence to make this national news. The show should focus on the people Poussey's death affected and the outcome of that death, rather than on any additional scenes/flashbacks with her.

Furthermore, the finale said goodbye to Poussey with a life-affirming moment outside of prison. Dramatically, that moment of freedom shouldn't be marred with additional flashbacks, since there's no narrative reason for it. And thematically, the show needs to make it as difficult and painful as possible to say goodbye. When victims like Eric Garner, whose real life death resembled Poussey's, Alton Sterling, or Philando Castile die, there is no return and there is no catharsis for their families. If the show has committed to educating its audience, then it needs to follow through on that lesson.

And OITNB should take this choice as an opportunity: In losing one black character, why not add more? I already mentioned Poussey's father, who was played by Thaddeus Daniels in Season 2. Her mother is referred to several times as deceased, but it's possible that either more black inmates could be introduced, or, possibly, this could be a chance to introduce a character to represent the many activists who have been fighting passionately for black rights for years. I think the way Litchfield has been racially profiling prisoners, committing human rights violations like Sophia's imprisonment, and, now, attempting to cover up a murder and protect one of its guards, would make it a huge target for activism.

Orange Is the New Black Season 5 is still a year away, but hopefully the writers have a good plan for how to deal with the aftermath of Poussey Washington's death. After handling the end of Season 4 in a way that was emotionally satisfying but politically unsatisfying to some, I think carrying out what they started by making Poussey's death reverberate without leaning on the crutch of more appearances from Samira Wiley is an important step.

More like this
A New Season Of The Midwich Cuckoos Could Be Coming “To A Town Near You”
By El Hunt
The ‘Love, Victor’ Showrunner Gave Fans Hope For A Possible Spinoff
By Brad Witter
Everything We Know About When To Expect The Rest Of The Upshaws Season 2
By Kadin Burnett
Legacies Showrunner Said There Is Still Hope For More Vampire Diaries
By Gretchen Smail
Get Even More From Bustle — Sign Up For The Newsletter