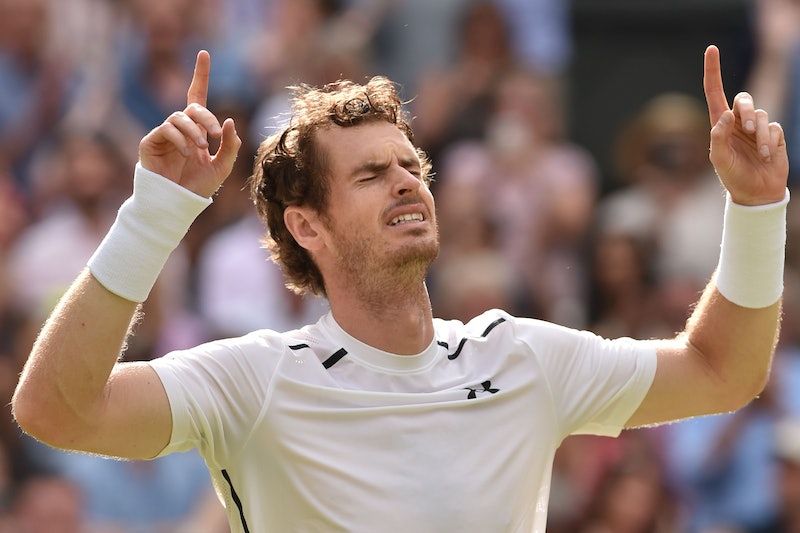 In his 11th Grand Slam final, Scotland's Andy Murray got cheeky about Brexit with David Cameron after winning his second Wimbledon title Sunday. Tennis' world No. 2 dominated the court to beat out first-time Grand Slam finalist Milos Raonic of Canada 6-4, 7-6 (3), 7-6 (2) in a British victory that served to only temporarily distract the nation from the economic and political fallout of its recent European Union referendum.

While much of Britain may have been hoping Murray's Wimbledon win would finally bump Brexit out of the headlines, the 29-year-old tennis champ dropped a subtle reference to the nation's recent decision to leave the EU. It began when Murray drew the crowd's attention to the presence of British Prime Minister David Cameron, who'd been watching the match in the Royal Box, during a courtside interview with BBC presenter Sue Barker immediately following the match. "Amazing atmosphere. Lots of ex-players, legends up there watching as well. It's a pleasure to play in front of you. The prime minister of the country here as well," he said.

But while Murray may have felt honored by Cameron's attendance, a majority of the crowd appeared to feel otherwise as the Scot's name drop caused the crowd's roar of applause to turn slowly into a chorus of boos. "You know I think playing in a Wimbledon final is tough but I certainly wouldn't like to be a prime minister, it's an impossible job," Murray said cheekily in response to the crowd's disapproval.

It wasn't the first time Murray, who remained rather tight-lipped about whether he'd vote Leave or Remain prior to the referendum, has subtly touched on Brexit during Wimbledon. According to the Daily Mail, a reporter asked Murray how he felt being Britain's "last hope" a few days before the final. "It's not that bad, is it? Is it that bad?" the British champion replied in jest.

Throughout Sunday's final, Murray remained a powerful player, pressing Raonic with a dominating defense and a winning backhand as the crowd chanted "Andy! Andy!" An emotional Murray cried briefly courtside after his victory. He told reporters his tears were a result of the pressure he'd put on himself going into the match. "I definitely feel a lot different than I did three years ago," the Los Angeles Times reported Murray said in his ESPN post-match interview. "I put so much pressure on myself, so much stress to try and win this. I was obviously extremely emotional... but I feel like I'm going to enjoy this one."

In 2013, Murray became the first British man to win a Wimbledon singles title in 77 years by defeating Serb Novak Djokovic.