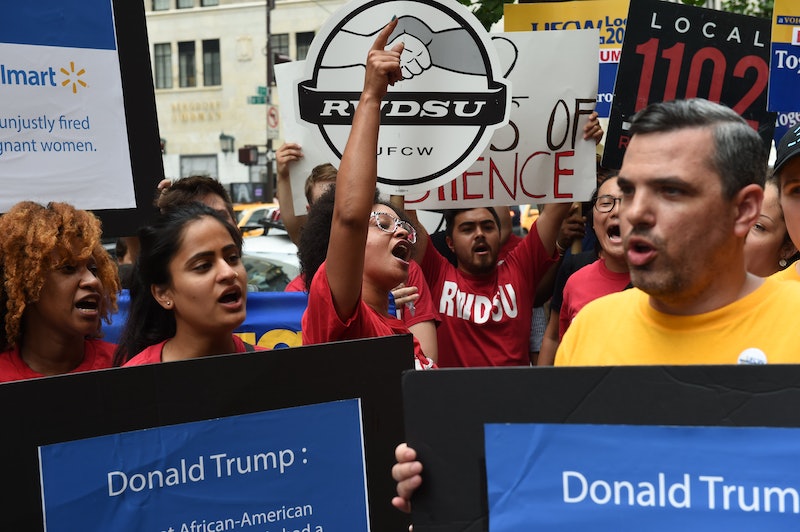 More than 50,000 people are expected to attend the long-awaited Republican National Convention, but it might not go as smoothly as organizers would hope. Safety concerns are mounting after a week of civil unrest across the country, combined with previous safety concerns from the divisive election cycle. Realistically, safety can't be guaranteed at any public event this size, but there's a lot of concern particularly about the safety of attending the Republican National Convention this year.

The RNC's Committee on Arrangements tells Bustle, "For the past year the COA has been working closely with the Secret Service, the Cleveland Police, the FBI, and additional state, local and federal partners to make sure delegates, attendees, and residents of the city of Cleveland are safe during the Convention. Law enforcement partners are continuing to monitor and investigate threats and information related to implementing a security plan."

Beside those expected to attend the convention, there should be a massive amount of protestors, too. A federal judge ruled against the city of Cleveland late last month and determined that the previous restrictions on protesting, which would have banned demonstrators from public parks and kept them outside the massive security zone, was an unconstitutional violation of people's civil rights. Protestors can gather closer to the venue than previously expected, a win for those trying to advocate for their candidates or specific policies.

But that means more opportunities for conflict among protestors. Ohio is an open carry state, and gun control has been an incredibly divisive issue during this election season. There was a petition earlier this year to overturn the Quicken Loans Arena's ban on open carry inside the venue, and though that was struck down by the Secret Service, it's possible that gun rights advocates will be carrying guns openly outside the arena, and that conflicts could arise with counter-protestors.

Another area of serious concern is the public attitude toward police in the midst of a week's worth of unrest. The head of the Cleveland Police Patrolmen's Association, Steve Loomis, sent a letter to officers this week in response to the Dallas shooting, warning officers to "remain alert and extremely cognizant" during the convention. "Several State Union leaders ... have expressed their extreme concern for us during the RNC."

About a third of Cleveland's 1,559 officers are assigned to convention duty, though there's a concern that that won't be enough. Earlier this month, Loomis sent another letter, accusing the city of providing inadequate resources and training for officers ahead of the convention. Police Chief Calvin Williams disputed the claim, stating that "officers have undergone hours of training ... [that] has been both comprehensive and valuable" to prepare for the convention.

The situation is further complicated by the Republicans' presumptive nominee. Donald Trump's official nomination could bring a fresh wave of protesting from minority activists, whose protests at rallies earlier this year ended in violence on multiple occasions. In the wake of the Alton Sterling and Philando Castile shootings, there will almost certainly be Black Lives Matter demonstrators present to protest against Trump's rhetoric and its role in the nation's current racial climate.

The RNC will last for just half a week, and it's going to be a huge task for the Cleveland police to keep order in the tense intersection between all the currently explosive social issues, though as the RNC says, it is working with several agencies to ensure everything is safe. But the politics surrounding the convention could prove just as contentious as the politics going on inside the arena.