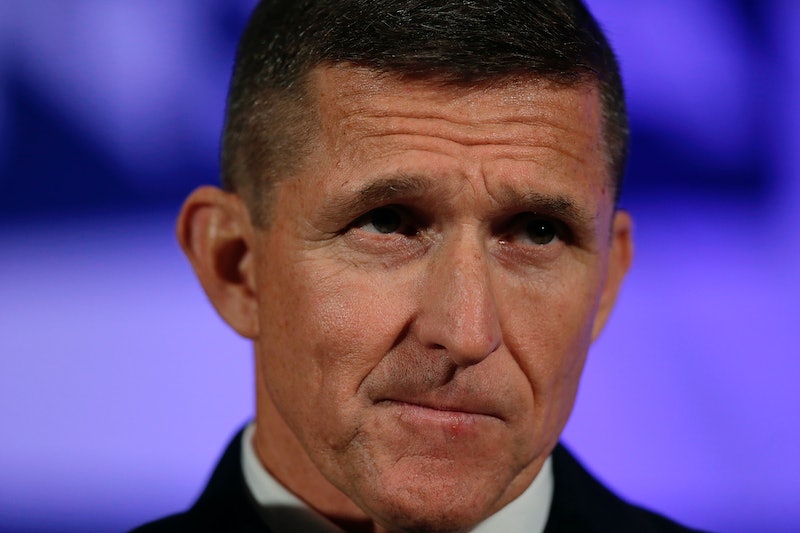 With the Republican National Convention roughly two weeks away, chatter about who Donald Trump will choose to serve as his vice president continues to increase. In a rather surprising development, the presumptive Republican nominee is now reportedly vetting a retired military general in his search for the perfect running mate. But who is Lt. Gen. Michael Flynn and why is Trump's consideration of the retired Army general raising so many eyebrows?

Earlier this week Trump confirmed he was rethinking an earlier strategy to put an established politician on his election ticket. "I like the generals. I like the concept of the generals," Trump revealed Wednesday in an interview on Fox News. "We're thinking about — actually, there are two of them that are under consideration," he said without naming names.

Flynn was first reported as a name on Trump's shortlist of vice presidential candidates by the New York Post, but the paper was unable to get Flynn to confirm or deny the news. "One of the things I expect Mr. Trump would look for in a vice president is discretion," The Post reports Flynn said. "All I would say is that I have been honored to serve my country for the past three decades and look forward to serving in other ways now that I am retired from the US Army."

Trump also deferred from directly responding to the Post's report, telling the publication simply, "I have a lot of respect for Gen. Flynn and his advice is important."

Flynn proves an intriguing addition to Trump's shortlist of potential running mates for a few reasons. The retired former chief of the Defense Intelligence Agency is a registered Democrat, according to the Washington Post, a fact which might prove problematic to the real estate mogul's efforts to drum up support among Republican party leaders.

And while Flynn is a vocal critic of President Barack Obama, he has also voiced a few opinions which contrast sharply to the GOP's party line. When asked where he fell on the issue of abortion in an interview with ABC's This Week, Flynn said he felt "women have to be able to choose" as they carry the majority of the responsibility for child-rearing. "They are the ones that have to make the decision because they're the ones that are going to decide to bring up that child or not." Flynn also said he felt the issue of same-sex marriage — which he called "what people do in their private lives" — was not one of the "big issues" facing the country at this time.

Trump's decision to extend his shortlist of potential vice presidents to include a former military member comes as the presumptive Republican nominee's campaign adopts a rhetoric focused on national unrest in light of the attack on Dallas law enforcement.