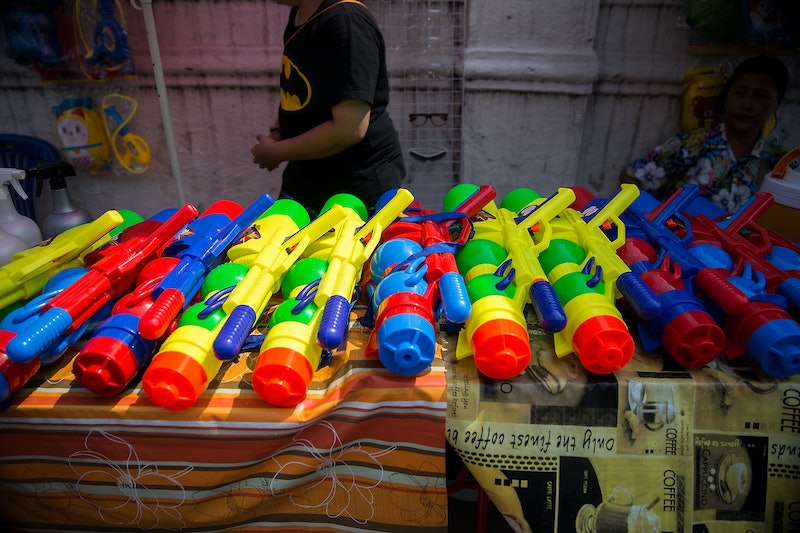 When Cleveland hosts the Republican National Convention later this month, there will be strict rules limiting what kind of items are allowed in and around the event. The list of things banned from the GOP convention is quite eclectic and wide-reaching: Everything from explosive devices (duh!) to tennis balls (huh?) are prohibited from the area around the Quicken Loans Arena. But you know what is allowed? Guns! Because America.

The city of Cleveland has banned a whole lot of items from the event zone. The list, in its entirety, includes fireworks, drones, umbrellas with metal tips, ladders, canned goods, hammocks, grappling hooks, water guns and, last but certainly not least, "containers of bodily fluids." Certain private businesses and residencies will be exempt from these prohibitions.

But although metal-tipped umbrellas won't be allowed in the event zone, firearms will be fair game. Ohio is an open-carry state, which means that the city, by law, can't prevent anyone from toting a legally-owned firearm around inside of the event zone.

The Secret Service has made clear that guns won't be permitted in the secure zone, however, despite the fact that 55,000 people signed a petition asking that firearms be allowed within the Quicken Loans Arena.

Originally, the event zone was much larger. This sparked a lawsuit from the American Civil Liberties Union, which argued that the city's restrictions amounted to a violation of the First Amendment. A federal judge agreed, and the two sides ultimately struck a compromise that effectively shrank the event zone. One effect of this was that protesters will be allowed closer to the convention than earlier planned.

However, the city of Cleveland has to pre-clear all protest marches before the convention. As of last Thursday, it had only issued permits to four protest groups, one of which is a pro-Trump organization. You could argue that this shouldn't constitute a "protest" group, as they aren't actually protesting anything, but no matter: Fox 8 reports that the pro-Trump group might not "protest" the convention after all.

Regardless, anyone hoping to bounce a tennis ball around during a protest is out of luck. But if you'd like to bring a handgun, as long as you're not in the secure area, you're more than welcome.