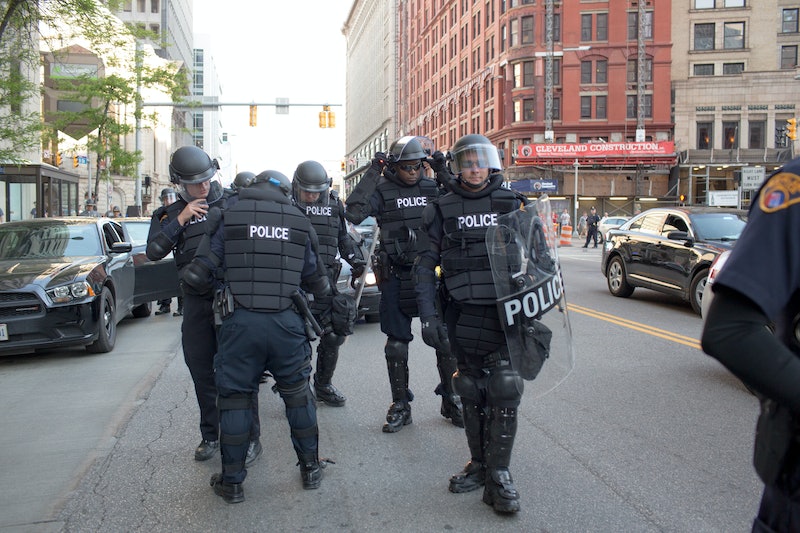 Preparations are underway for the Republican National Convention, which will be held in Cleveland later this month. In addition to lingering uncertainty about whether Donald Trump will actually win the party's nomination, there are big questions of security and safety, as this year's convention is expected to be a lot more raucous than any of the past few. To that effect, Cleveland is spending $20 million on riot gear and security equipment for the convention. You read that right.

In April, the city put out bids for 2,000 full-body riot suits, 24 sets of ballistics body armor, and 300 patrol bikes. In addition to the $20 million spent for physical equipment, the city has allocated another $30 million toward "personnel-related expenditures." The entire $50 million cost comes from federal grant money Cleveland secured to prepare for the convention.

Some of the riot gear has arrived already. However, the local police union said in June that the initial batch of suits didn't fit its officers. "I'm not trying to be obstructionist here, but this stuff has gotta fit," Steve Loomis, president of the Cleveland Police Patrolmen's Association, told Fox 8 Cleveland. "We have some smaller police officers. We have some larger police officers that this stuff is never, ever, gonna be able to fit." Reportedly, some officers also had difficulty using their gun belts underneath the riot suits.

The riot gear caused yet another administrative headache for Cleveland police when it was discovered that, while the police department itself does possess body cameras, it lacked the equipment needed to mount the body cameras onto the newly-received riot suits. This problem was ostensibly solved when Taser (as in, the company that makes stun guns) announced that they would lend 300 mounting devices to the police department for use during the convention.

What all of this underscores is that the convention's planners are taking security concerns more seriously than in years past; Tampa, by way of comparison, only spent about $13 million on security gear when it hosted the Republican convention in 2012. And, well, this time, the presumptive Republican nominee himself has basically urged his supporters to assault protesters.

"If you see somebody getting ready to throw a tomato, knock the crap out of them, would you?" Trump told fans at an Iowa rally in February. "Just knock the hell — I promise you, I will pay for the legal fees. I promise." And these calls have been heeded: In March, a Trump supporter was filmed sucker-punching a black protester at a rally. Trump later said that he doesn't condone violence and denied offering to pay for anybody's legal fees.

Hopefully, the four-day ceremony in Cleveland will be violence-free. But you can't blame Cleveland for suspecting that it might not be, and preparing accordingly.