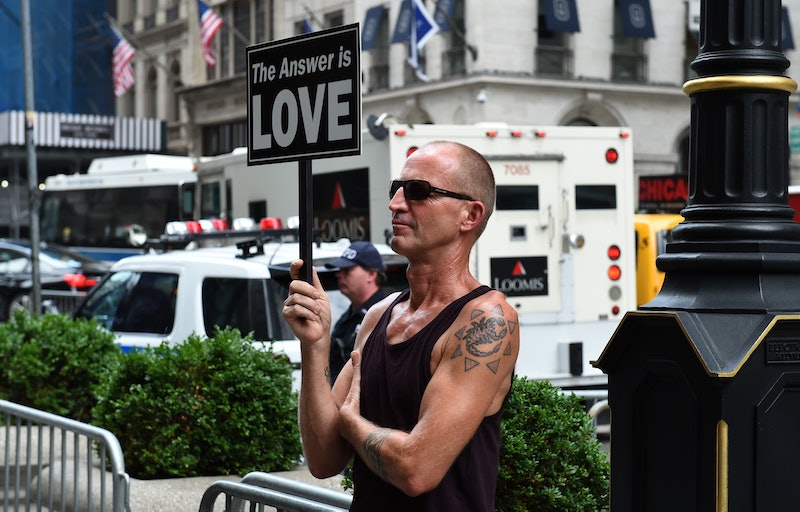 The Republican National Convention will begin on July 18, so now is the time to take a closer look at who exactly will be in attendance outside the convention hall doors. So, what groups are protesting the RNC? A whole range of protesters, and counter protesters, are expected to be in Cleveland, Ohio, at the RNC, and the authorities have said they are prepared to handle mass arrests if things get out of hand.

Groups as varied in message and mission as the coalition of groups making up Organize! Ohio, the Million Women March, and Bikers For Trump will be on the streets outside the Quicken Loans Arena and alongside the official parade route. Organize! Ohio is a coalition of progressive activist groups who are fighting on several fronts to enact progressive change in the state, while this year's Million Women March is an offshoot of the Black Lives Matter movement against police violence. Bikers For Trump is pretty self-explanatory; they are bikers, and they are fans of Donald Trump.

Apparently, white nationalist groups like the Traditional Workers Party (TWP), have also indicated that they plan on being in attendance at the convention. The TWP is one of the neo-fascist skinhead groups that clashed with left-wing anti-fascist groups in Sacramento, California, late last month, which resulted in nine men and one woman walking away from the event with stab wounds. A statement by TWP Spokesperson Matt Parrott seems to indicate that their group is expecting violence from left-wing groups. "We’re essentially just going to show up and make sure that the Donald Trump supporters are defended from the leftist thugs," Parrott told McClatchy DC. He also told the publication that about 30 members of his group were planning on being in attendance on the streets of Cleveland. So far, there have been no official acknowledgements of any specific threats of violence, but Dan Williams, spokesman for the City of Cleveland, told Time that law enforcement is prepared to handle mass arrests.

However, at the end of the day, there is still the general hope that things won't get out of hand. Dan Williams, the media relations director for the city of Cleveland told Time that “our expectation is that people are going to come and behave." As a strong demonstration of force, 500 local law enforcement officers and between 2,500 to 2,700 additional out-of-area officers will be on standby to make sure that things don't get too crazy.

With all of the different groups planning on showing up to the Republican National Convention, there is a very real potential for things to spin out of countrol, and quickly. However, the vast majority of convention attendees — delegates, protesters, and counter-protesters — likely will just want to show up, do their work, and go home without too much of a fuss.