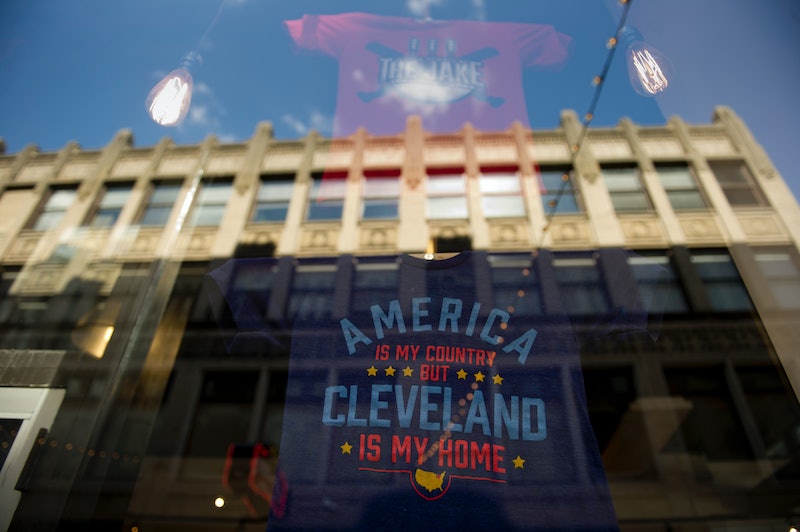 If you've been watching this season's political wrangling like the outrageous reality TV show that it often was, you may be wondering how to attend the RNC convention — it will be incredibly entertaining, that's for sure. Well, the moment is finally here. The delegates are heading to their respective events and the presumptive nominees will soon be officially so. This is where the magic happens. But if you're just now wondering how to get inside the Republican National Convention in Cleveland, your odds of attending probably aren't that great.

The convention begins on Monday, July 18. According to the GOP's convention page, "Tickets will not be available for purchase and quantities are limited." Bummer. That's even harsher than the normal Ticketmaster run-around. But don't break down in salty, GOP tears just yet.

If you've managed to finagle your way into the role of a delegate — either by running in an election at the polls, being voted in at the state convention, or being chosen by a candidate, you're in luck. They want you there — even if you do have to pay your own way to Cleveland.

The other officially recommended way to attend is to volunteer. Not all volunteers will have access to the arena, but some will. Here's who the GOP says they are looking for:

We are looking for enthusiastic Republicans who can help us by providing operational support throughout Cleveland. Some of these duties might include, but are not limited to, runners, greeters, transportation, Americans with Disabilities trained volunteers (ADA), drivers, and event wayfinders.

If you fit the bill, apply now online. There may be some last-minute roles they're trying to fill. You could also volunteer at your state Republican Party headquarters, but this late in the game it may be a long shot. Your only other options, though, would leave you outside of the arena. There may be plenty of people joining you there. Large crowds of protestors are expected to descend on the area throughout the four-day convention.

Plenty of Republicans will be skipping the party this year as a response to Trump's rise in the party. Plenty of party leaders — including Mitt Romney — announced as far back as May that they would not be attending thanks to Trump. But don't expect to get past security with a fake Romney, Bush, or McCain ID — it won't work. The security has been pumped up following the Dallas attacks, so it looks like you might be watching on TV with the rest of us.