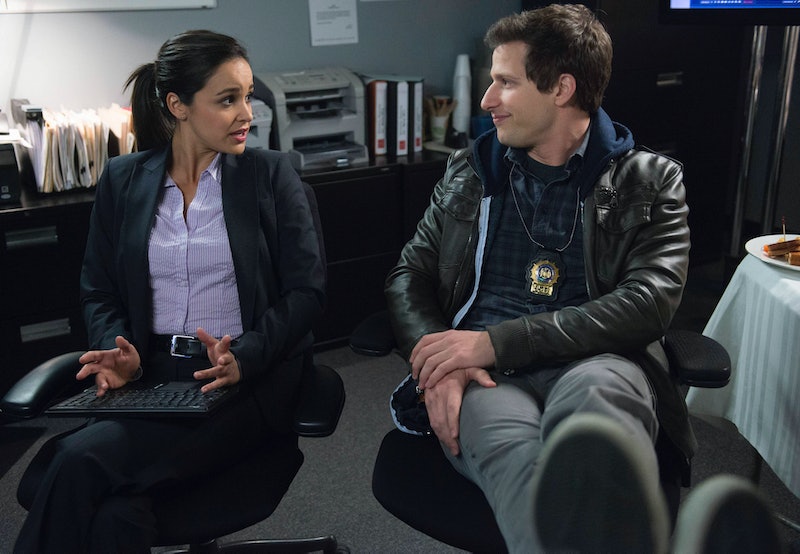 Tuesday's Brooklyn Nine-Nine episode promises to deliver at least a few more inklings of Jake Peralta's (Andy Samberg) crush on his co-worker, Amy Santiago (Melissa Fumero). And while some fans find this obnoxious and forced, we should probably all keep in mind the way we felt about crushing co-workers like Mindy and Danny on The Mindy Project before they kissed and made our hearts explode. Guys, this little romantic subplot might just be alright.

To be fair, the story came about in a rather surprising fashion. After we'd more than settled into Brooklyn Nine-Nine's realm, the curve ball of Santiago's ambition threatened to take her away from the precinct, forcing Jake to realize he would not be alright with her leaving. A similar effect happened when he took Santiago on the joke date they'd made a bet on years before and found himself actually having a good time with his station "rival." Sure, we thought we'd established a universe in which the main characters' motivations were not romantic (that was reserved for Boyle and his crush on Rosa), but guess what: just like in the real world, uncomfortable nascent emotions happen. And they're happening on Brooklyn Nine-Nine.

Sure, if this week's episode in which Santiago runs into her ex during tactical training results in a Gone With The Wind poster-style make out session between Peralta and Santiago, I'll be singing the blues. Brooklyn Nine-Nine is better than that. But there's also no reason to believe this series won't handle this apparent crush the same way its handled everything but Boyle's engagement: slowly and sweetly.

First of all, Peralta is not the most in touch with his emotions or his age — as we learned last week when he turned down Gina's generous offer to help him fix his massive debt situation out of pride. He's not going to suddenly turn on a dime, become a man, and sweep Santiago up. That's not in the cards. Besides, Santiago would probably lose it if he did — she's not one for sudden changes.

But it's more than just the fact that the series has the ability to handle this process appropriately. There's also something to be said for a series that has an emotional core aside from friendship. There's a reason most sitcoms rely on the Ross-Rachel friendship-to-romance model: it creates a forceful tug on the hearts of its fans. And while it can feel forced when it's done entirely wrong — see: anything happening on ABC's Mixology — when it's right, it's simply a device to pull out the emotional connection you're already hoping to have with these characters.

It's the reason that while even at its height, Community still felt as if it had a missing piece. Younger fans clamored to Tumblr, where they concocted fauxmances between the characters — GIFs of Britta and Jeff looking "longingly" at one another abound, yet on the show they were never really more than sex friends. While some sitcom fans — ahem — go overboard, it comes from a very natural place of seeking and needing that emotional draw. And when you realize that we're dealing with a series from folks who worked on The Office (also known as the home of Ross-and-Rachel 2.0, Jim and Pam) and created Parks and Recreation (April and Andy, Chris and Ann, Leslie and Ben — oh my) it's hard to expect anything less than a sweet longing between two longtime friends with a clear opposites-attract vibe. It's what Mike Schur and company do.

So, while I'll be vigilant about watching how this crush unfolds — as I mentioned, The Mindy Project's two-season roll out worked particularly well to build a few annoying longing looks into something real — but I have faith in Brooklyn Nine-Nine. Unlike Mindy, Brooklyn Nine-Nine knew exactly who it was as a show after only a handful of episodes, so there's even less danger of it degrading itself than there was when Mindy brought up the Danny Castellano romance question. Brooklyn Nine-Nine's sweet, innocent sensibilities are well-established, but that also means that if the writers jump the gun on Peralta and Santiago, I'll be just as upset as those of you who've despised the idea of this office romance from day one because the show is poised to do this thing right.

Until then, I've got my fingers crossed that Brooklyn Nine-Nine does what it does best and lets this unfold sweetly and without much of a fuss. And trust me, so should you.