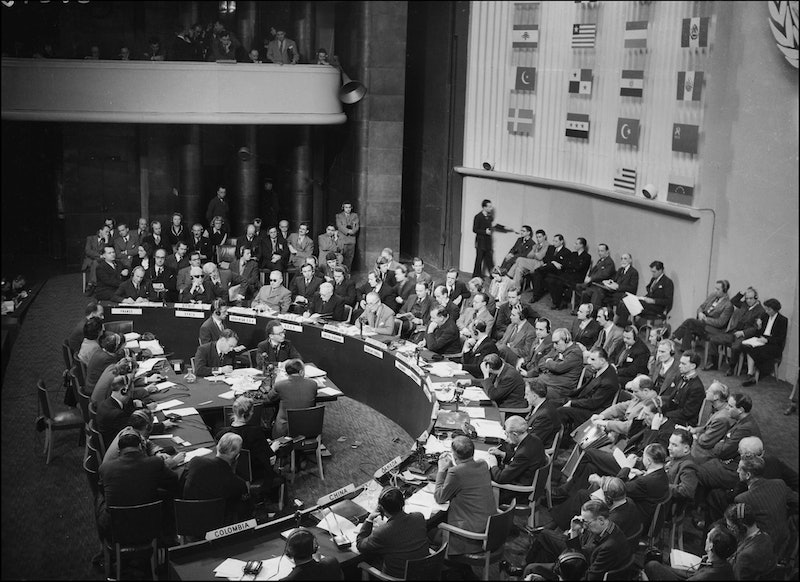 The 2016 Democratic National Convention will kick off in Philadelphia on July 24. It will be a historic convention: the first woman to win a major party's presidential nomination will likely become the Democrats' official nominee. However, 68 years ago, the 1948 DNC in Philadelphia was historic, and it changed the Democratic Party forever.

At the 1948 DNC, the Democratic Party added civil rights to its platform. It's shocking (and upsetting) to realize that until only 68 years ago, political parties were not officially pro-civil rights, and that the entire Democratic Party did not support the addition of civil rights to the party's platform. In fact, many Southern Democrats walked out of the 1948 convention in protest, essentially leaving the party forever.

However, no matter how long overdue, the 1948 DNC's anti-segregationist, and pro-civil rights stance forever changed American politics, and helped bring political support to the long fight for equality, and against racism, that continues to this day. Before 1948, there was a large group of southern representatives in the Democratic Party, and these politicians were, for the most part, pro-racial segregation. After the historic 1948 convention, the Democratic Party was forever changed, and the South became mostly Republican for the first time.

It was with the following words that Hubert Humphrey — who went on to be the Vice President from 1965 to 1969 — helped convince the Democratic Party to finally become more liberal, and support civil rights:

The time is now arrived in America for the Democratic Party to get out of the shadow of states' rights and walk forthrightly into the bright sunshine of human rights.

Philadelphia has witnessed many historic events in American history: the City of Brotherly Love was the first capital city of the United States, and it was also where the Founding Fathers met and debated the Declaration of Independence. However, though it may be a widely underrated event, Philadelphia also witnessed the 1948 DNC, where Democrats finally added racial equality to the party's platform, and forever changed American politics.

It's fitting that the Democratic Party is heading back to Philadelphia for another historic convention, and a convention at which the Party's platform is expected to be more liberal than ever before. However, as recent events proved once again, all Americans are not treated equally, and racism still plagues the United States, even 68 years after 1948's historic convention.