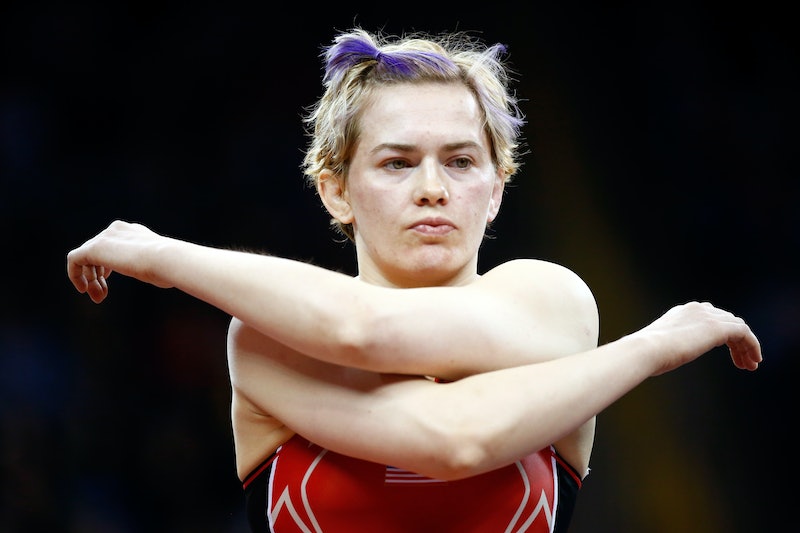 You might assume that the Olympian's oft-Draconian rules bar certain modifications to appearance — but it would seem that they're surprisingly liberal in those areas. Athletes are allowed to sport tattoos and earrings (within reason, of course), but what about hair? Are Olympians allowed to dye their hair?

Well, signs definitely point to yes. It's not as common as, say, the ubiquitous sparkly stud earrings for the gymnasts, or the even-more ubiquitous Olympic five-ring tattoos for swimmers, but brightly dyed hair is still something that happens during the Games.

Sure, it may only be once in a blue moon, but there's definitely a precedent: Take wrestling Olympian Elena Pirozhkova, for example. She wore purple streaks in her hair for the Olympic trials back in April, and it looks like she might just keep them for the Rio Games this summer — after all, as explained to TeamUSA.org, "I think purple says something about me now. I think it makes me more edgy, I think it makes me more sassy." I may not know much about wrestling, but I do know that edginess and sassiness are key ingredients, and if purple hair gives Pirozhkova that extra something special, all the more power to her.

Track and field champion Anna Willard has also been known to play with her hair color during the Olympics. She sported a streak of red hair during the 2008 Olympic trials.

And she switched things up to purple when it came to the Beijing Games later that year.

Both looks were majorly fabulous, no?

22-time Grand Slam winner Serena Williams made some major headlines when she dyed her hair an ombre green in honor of St. Patrick's Day this year. She's always competed with her hair in more natural shades, but how cool would it be if she switched things up for the 2016 Rio Games?

It's not exactly likely, but the world could always use more green-haired Serena Williams, IMHO.