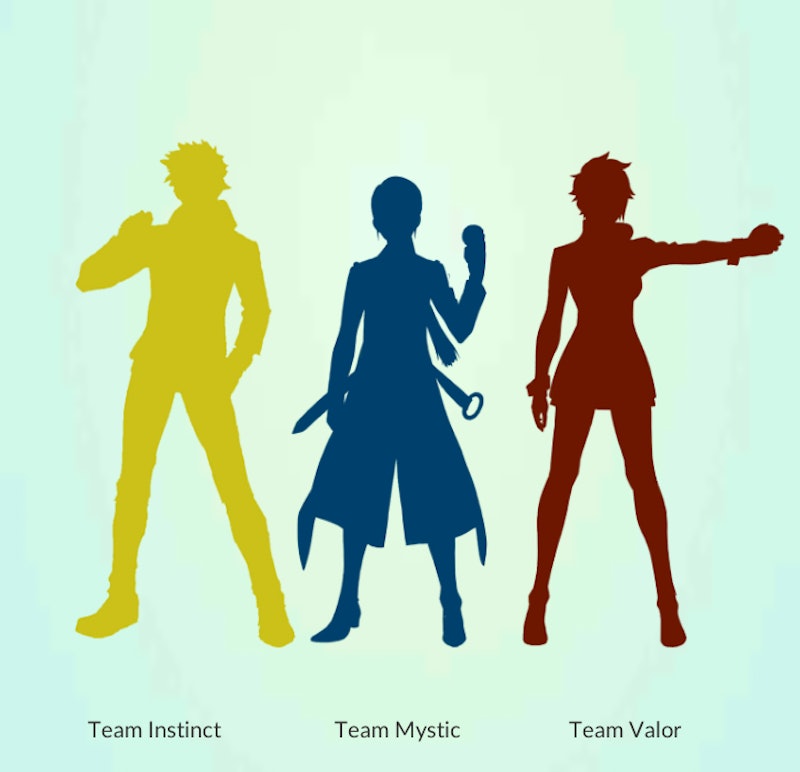 I have been spending the past few days obsessed with "Pokemon Go," just like the rest of the U.S. population. Since the app rocketed to the No. 1 spot in the iTunes App Store and became one of the most popular games of all time, users have been spending their free hours figuring out how to catch Pokemon, how to challenge other users for control of Pokemon Gyms, and how to join a team in "Pokemon Go." But speaking of teams, what do they each represent, and what does joining them mean?

For starters, you can't join a team until you hit Level 5, which you can achieve by catching wild Pokémon, evolving the Pokemon you already have, and/or hitting up Pokestops. Once you reach this baseline of familiarity with the game and its mechanics, you can choose from Team Valor, Team Mystic, and Team Instinct. Your chatty Pokefriend Professor Willow tells you that each one is led by a different Trainer and values different traits. Currently, there is no way to change your team once you have picked one, so you better be sure you've chosen correctly! Let's break down what each team stands for, shall we?

The woman at the head of the Red Team is Candela, who values strength and bravery. She'll tell you:

"Pokemon are stronger than humans, and they’re warmhearted too! I’m researching ways to enhance Pokemon’s natural power in the pursuit of true strength. There’s no doubt that the Pokemon our team have trained are the strongest in battle! Are you ready?"

Candela also looks like she has a killer pixie cut, but we only ever see her in shadow, so we may never know for sure.

The legendary Pokemon that represents Team Valor is Moltres, the fire bird.

Blanche, leader of the Blue Team, is an intellectual who spends just as much time studying Pokemon as she does training them:

"The wisdom of Pokemon is immeasurably deep. I am researching why it is that they evolve. My team? With our calm analysis of every situation, we can’t lose!"

Full disclosure: I am a member of Team Mystic, and if you're a Game of Thrones fan, you should be, too. Users have coined the hashtag #TheTeamInTheNorth to describe Mystic, which is represented by Articuno, the Legendary Pokemon of ice and snow. Even if you're not a GoT diehard, the name "Team Mystic" is still kick-butt enough to make you want to join.

The third and final group is the Yellow Team, which is helmed by Spark. It seems as if Spark spends most of his time hatching Pokemon eggs, which makes him sort of like a Pokemon farmer, but with a dope name.

"Pokemon are creatures with excellent intuition. I bet the secret to their intuition is related to how they’re hatched. Come on and join my team! You never lose when you trust your instincts!"

Team Instinct's symbol is Zapdos, the Legendary Pokemon of electricity and thunderstorms.

Which team will you join?

Statistics-wise, you're most likely to join ... Team Mystic (whoo)! You can vote on the Tweet below to see the numbers.

Just remember that there are no actual benefits to joining any of the teams. That is, you don't get a stat boost if you pick a certain one -- just bragging rights and bravado when you're sizing up strangers on your next Pokemon walk. Which, don't lie, we all do.