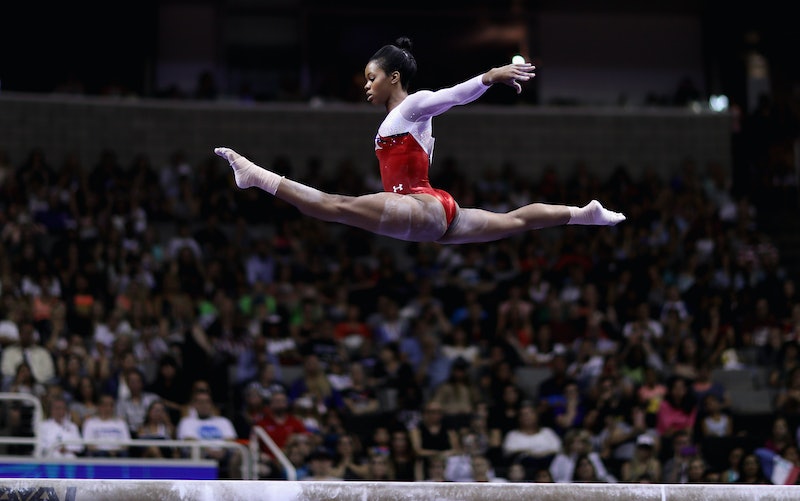 The 2016 Summer Olympic Games in Rio de Janeiro, Brazil, are quickly approaching. Friday, August 5 is the opening ceremony, and Sunday, August 21 is the closing event, which means that these games are just under a month away. My favorite event was always gymnastics, ever since the famed 1996 U.S. team — the Magnificent Seven, as they were then called — but it's looking like the U.S. might have a legitimate shot at maintaining gold medal status, considering who is on the 2016 Olympic gymnastics team that was just selected after a fierce contest in San Jose, California. After all, only the very best make it to the Olympics.

Given each athlete's individual credentials, this year's team is expected to follow in the footsteps of 2012's team, who were dubbed "the Fierce Five." Team USA's website even acknowledges that this particular team is one of the most decorated and competitive teams ever to enter the Olympic Games. In fact, two of this team's gymnasts, Gabby Douglas and Aly Raisman, are returning to the Olympic team after winning both team and individual golds at the London Olympic Games in 2012. They are now the first U.S. women’s gymnasts to make two Olympic teams since Dominique Dawes and Amy Chow in 1996 and 2000.

Here's the gymnastics lineup for the 2016 Olympics Games:

Biles is 19 years old and a three-time, all-around world champion. She is considered by many the "greatest female gymnast ever," according to the Team USA website. Ten of the 14 world championship medals she has won in the last three years were gold, making her among the most decorated U.S. athletes in history. Biles won the all-around at qualifications, snagging the only available automatic qualification spot. Think about that: she didn't even have to compete because she was already qualified. This woman is talented. According to USA Gymnastics, Her credentials include two team golds (2014 and 2015), three all-around golds (2013, 2014, and 2015), three floor golds (2013, 2014, and 2015), two golds (2014 and 2015), one bronze (2013) on balance beam, two silvers (2013 and 2015), and one bronze (2014) on vault.

At the 2012 London Olympics, Douglas rose to fame as the first U.S. gymnast to win both team and all-around gold medals, and, notably, the first black gymnast to win individual gold. The Team USA website states that the the 20-year-old Virginia native (now residing in Los Angeles) could be a "surprise" medalist for the team, and could potentially stand out in the all-around competition.

Raisman, who is 22 years old, was the most medaled member of the U.S. gymnastics team following the 2012 London Olympics. She earned a gold on floor exercise and a bronze on the balance beam, and contributed to the team gold. She took a break following the London Games, but is ready for Rio. As she, herself, recently told Team USA regarding the team's work ethic, "It says a lot about this team because we're all trying to squeak out extra tenths and I hope that we live up to our potential in Rio."

Hernandez is a notable competitor for many reasons — she's the first Puerto Rican woman to make the team, she's the sole first-year competitor on the team and, at 16 years old, Hernandez is also the youngest of the female gymnasts. She was picked as a favorite to make the team after winning the junior all-around national title in 2015. Even better, at qualifications, she finished second to Biles — remember that Biles is sometimes called the "greatest female gymnast ever" — in the all-around, and Hernandez also won first place for balance beam.

As ABC News notes, the 19-year-old from Dallas is the only woman on the team who specializes in the uneven bars. In 2015, She won the 2015 world title for uneven bars in a four-way tie for gold. She will participate in other areas, even though uneven bars are her strongest suit.

Ashton Locklear, MyKayla Skinner, and Ragan Smith will join the competition as replacements should anything happen to any member of the Olympic team, but hopefully they will only need to serve as an additional level of moral support. In any event, the U.S. team is looking pretty solid. Here's to another year of gold for the U.S.

Editors Note: This piece has been updated from an earlier version.