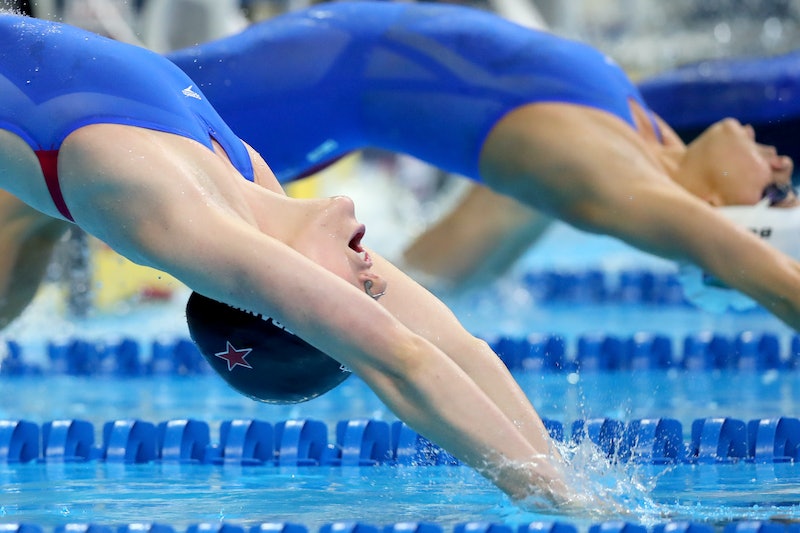 The 2016 Olympics are coming up, and swimmer Missy Franklin got off to a rough start during the U.S. Olympic Team Trials in Omaha, Nebraska. The five-time Olympic medalist finished seventh in the 100m backstroke and 11th in the semifinals for the 100m freestyle, which means she did not qualify to compete in those events in Rio de Janeiro. However, she did secure a spot in the 200m backstroke and 200m freestyle, which means Missy Franklin is on her way to the Olympics once again.

Franklin expressed disappointment after her performance in the 100m freestyle trial. "That speed just doesn't feel like it's quite there this meet," she told CBS Sports. "No idea why. It's super disappointing, but I really feel like my endurance is there, so it gives me a lot of hope for my 200 back."

Her hope was not misplaced. Franklin is the world record holder for the 200m backstroke. At the trials, she finished behind Maya Dirado, securing a spot in that event. While her seventh-place finish in the 100m backstroke was disappointing, given that she won the gold in that event at the London Olympics back in 2012, she bounced back with her performances in the 200m races, and will be competing in a total of three events in Rio.

A four-time Olympic gold medalist, 21-year-old Franklin has gone to college, turned pro, and sustained a back injury since 2012. She left U.C. Berkeley when she turned pro, and called it a big sacrifice. Before the U.S. Olympic trials began in Omaha, Franklin told USA Today that the struggles she has been through have given her new perspective:

I feel like I have this new wisdom that I've gained throughout the successes and the challenges of the past four years. Having experienced that, it makes you feel more mature in a way. Walking around, I feel like I can almost hold my head a little bit higher knowing I've been through all of this.

Franklin did not sail through the trials as she seemed to do in 2012, when she qualified in seven events and went on to win five medals in London. But she also made it clear that she has a different perception of success than many of her critics. “I think a lot of people coming in just assumed that in order for this to be a successful meet for me, I’d have to do the same thing I did in 2012, and that wasn’t the mindset I had coming in,” she told USA Today. “I wasn’t trying to be better than I was in 2012. I’m trying to be the best that I am right now, here, Missy Franklin in 2016. I feel like I was able to do that.”

After what was certainly a challenging week, Franklin was successfully able to obtain a spot on the Olympic team. "And that's all I needed to do," she said.