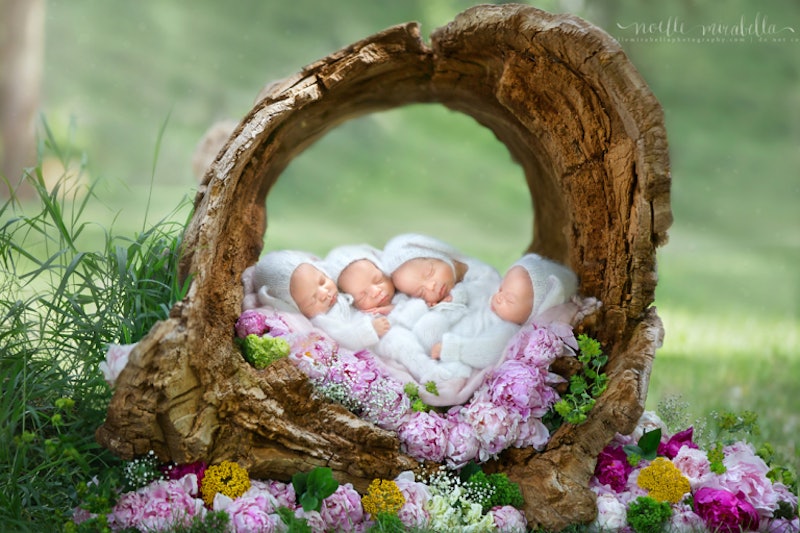 If you're looking for your daily girl squad inspiration, look no further, because these photos of identical quadruplets will have you feeling girl power AF. Photographer Cassandra Jones of Noelle Mirabella Photography in Grande Prairie, Alberta, shared the commissioned photos she took of the girls on her company's website and the internet went gaga. Goo-goo-ga-ga, to be sure. #cutenesstimesfour.

Professional baby portraits are always cute — I mean, it's hard to make a fresh ball of doughy sleepy goodness in a knit had look anything but adorable — but these four little identical girls are just next level cute (no offense to any other number combination of identical twin girls). Not only are they wrapped in pastel knitwear, but they're also shown wearing bunny ears in one photo and bear ears in another. The cuteness is so far beyond a Snapchat filter. These little girls look like cartoons, as in, in too freaking adorable to be real.

But real they are. And now a viral sensation, they are too. These girls aren't even old enough to lift their heads and yet they're more famous than many fame-seeking adults right now. But part of the reason their pictures are going viral is because of the story behind them.

Tim and Bethani Webb had been married for less than a year when they found out they were pregnant. They aimed for one, and received four. Though they were beyond excited to welcome these rare (1 in 15 million) identical girls into the world, they weren't exactly prepared on the financial front. Because, who can possibly be prepared for four children at once?! And most commonly, quadruplets are the results of fertility treatments — they're extremely rare in natural conception.

A close family friend created a GoFundMe page for the couple upon hearing the news of the pregnancy. The mother would spend the last few months of her pregnancy in the hospital awaiting a C-section. They would need a car large enough to fit all their little bunny bear babies. They'd need a stroller complex enough to fit them all. They'd need diapers times four. They'd need food and clothes times four. They'd need as much help as they could get, because they would be a single income household with six mouths to feed. Not an easy feat, for anyone.

Thanks to the Webb's thoughtful friends and the fact that now these pictures have gone viral, the funding has been inching closer to its goal. People all over the world are leaning about the Webbs and sending their support and well wishes. Hopefully for the Webbs, these little girls are as peaceful and calm in every day life as they are in these photos. And, if not, I hope they're motived to start an all-girls Hanson-esque family band. Because the world needs it.