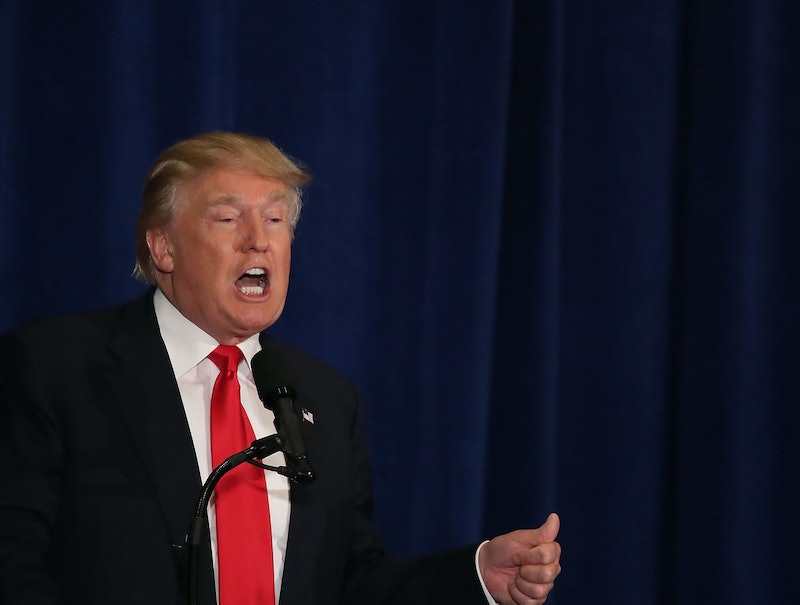 On Tuesday, presumptive Republican presidential nominee and real estate magnate Donald J. Trump responded to some surprising criticism he received over the weekend. And in typical Trump style, it was vociferous ― Trump attacked Ruth Bader Ginsburg, calling the Supreme Court justice's criticisms of his candidacy over the weekend a "disgrace."

According to Maggie Haberman of The New York Times, Trump responded to Ginsburg's comments in a telephone interview. In an interview published by The Times on Sunday, Ginsburg said that she "couldn't imagine" what it would be like to live under him as president, and mused that she might flee to New Zealand if it actually happened. On Monday, she followed this up by calling him a "faker," and lambasting him for still not having released his tax returns — something that's considered pro forma for modern presidential candidates.

While Trump didn't dip into his well of punchy, juvenile insults this time around, he was clearly still his combative and retaliatory self:

I think it’s highly inappropriate that a United States Supreme Court judge gets involved in a political campaign, frankly. I think it’s a disgrace to the court and I think she should apologize to the court. I couldn’t believe it when I saw it ... That she should be saying that? It’s so beneath the court for her to be making statements like that. It only energizes my base even more. And I would hope that she would get off the court as soon as possible.

In fairness to Trump, he's not the only one who raised objections to Ginsburg's remarks. It's extremely outside the norm for a sitting Supreme Court justice to weigh in on an ongoing presidential campaign. The justices are ideally envisioned as nonpartisan figures, even though anyone who follows the Court closely enough knows full well that this is not the case. For Ginsburg to weigh in the way that she did was undeniably unusual, and having served on the court as long as she has throughout so many partisan divides, she surely understands that.

But in fairness to Ginsburg, there's also never been a major party nominee as bizarre, inflammatory, or volatile as Trump, so everyone's in rather uncharted waters here. And as an unambiguously progressive justice and the most prominent and articulate feminist voice in the Court's history, you could easily see Ginsburg regarding Trump as an overriding threat to these typical norms of discretion and neutrality — one that she'd be honor-bound to speak out against.

In any case, Trump is now in a verbal sparring match with perhaps the most revered current justice on the American left. Obviously, it remains to be seen whether this helps him, hurts him, or has no impact at all. But it does mean that the spotlight may increasingly be swiveled to his own planned Supreme Court picks ― he's already floated several possibilities, which is highly unusual for a presidential candidate to do.