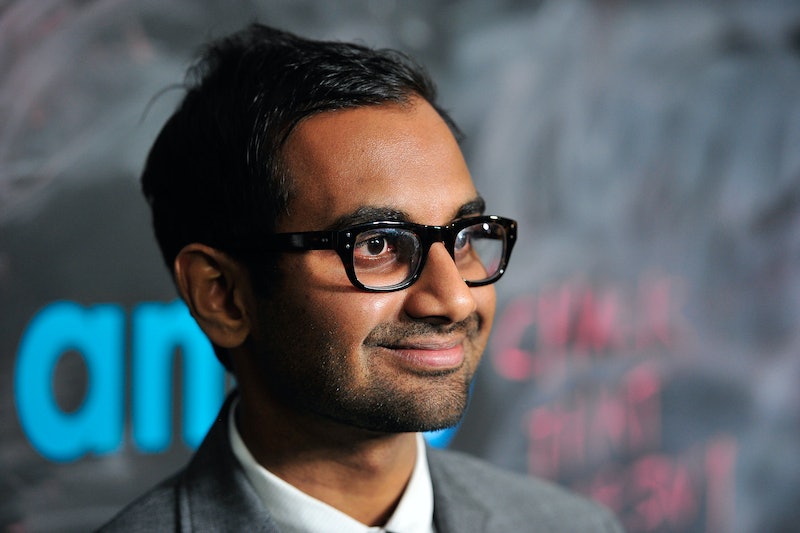 In case you missed it: comedian and star Parks and Recreation Aziz Ansari created a subreddit called Modern Romantics, along with NYU professor Eric Klinenberg, to cull material for a new book he's writing, which Klinenberg is helping him with. Evidently, Ansari is all about the romance; his last comedy special Buried Alive which he premiered on Netflix, was all about Ansari turning 30 and feelin' the pressures of finding love "at his age," "as a millennial," etc.

Created Tuesday morning, the subreddit is already generating a lot of thoughtful responses and not as many "humanity has failed us" responses as most subreddits are wont to do. Maybe it's because Ansari seems to attract a certain type of fan to his funny, thoughtful comedy. Ansari's last special used a lot of audience participation, and his new subreddit is just more proof that he's just a guy that likes talking to people. If there's a reason his fans feel particularly connected to him, it's because Ansari really does make an effort to hear their stories and experiences and incorporate them into his comedy.

It's an interesting use of the medium; not that Reddit is without its merits, but obviously the fedora-friendly site is often used for evil. I like Ansari's iteration of it as a public forum to lament (and celebrate!) the state of finding love in a post-Twitter/Tinder world. Some of the questions that Ansari posted as threads include: "If you've been single in the smartphone era and the eras before, how have things changed?" and more conventional questions like "What's the first date you've ever been on?" Even though the subreddit only went live Tuesday morning, there are already some quality responses.

In response to "What's the best first date you've ever been on?"

My best first date actually came from okcupid, that bastion of worst ever date experiences. We met up for drinks at my favorite bar and then I somehow got him to come to a Galentine's day event at a client's store (there was free drinks and food) where we made felt flowers. Then he came with me to take care of my dogs before we went to karaoke at my favorite place. He sang just as many songs as I did and we did dueling Proud Marys. Then we went back to my place and fell asleep in my bed watching Silence of the Lambs. Perfect, tip to tail.

Gets a little Pinteresty in the middle with the felt flowers, but points regained for Silence of the Lambs.

In response to "Has anyone broken up or gotten into a huge fight with a partner based on something you saw on their phone or computer?"

my boyfriend and I have been together for 4 years and are not friends on any sort of social media. I believe 100% that this is a contributing factor to the success of our relationship. it's not healthy to know every single thing a person does, significant other or otherwise.

Who is this person and how do they exercise such restraint?

There's also a really interesting conversation going on in the thread about whether being single is exhausting or not. A lot of redditors came forth and said that actually, being young now, there's very little time to think about being in a relationship, and they're just too exhausted trying to improve themselves to even entertain the idea of a relationship. It's sort of sad but pretty truthful.

You can contribute to Ansari's Reddit thread, and who knows? You might even end up in his book. Love isn't dead just yet.

More like this
All The Clues About Aly & Zach’s Relationship Status After 'The Bachelor'
By Brad Witter
The Bachelor’s Christina Mandrell Comes From One Of Country Music’s Most Famous Families
By Brad Witter
Mimi Webb’s IRL Situationship Inspired “Red Flags”
By Catharina Cheung
Paris Hilton & Carter Reum’s Relationship Timeline Includes A 2023 Grammys Date Night
By Bustle Editors
Get Even More From Bustle — Sign Up For The Newsletter
From hair trends to relationship advice, our daily newsletter has everything you need to sound like a person who’s on TikTok, even if you aren’t.