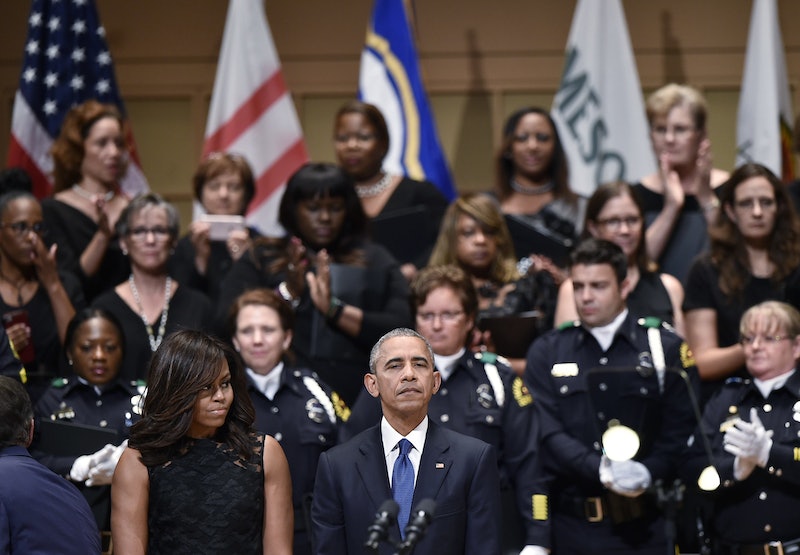 Hundreds of mourners attended the memorial service for the five fallen Dallas police officers who were killed in last week's horrific shooting. President Obama gave a moving and inspirational speech about the need for action in this time of tragedy, exemplified by one line which highlights how the nation can work to ensure that nothing like this ever happens again. This one quote from President Obama's Dallas memorial speech shows that he wants to honor the officers' deaths with actions, not just words.

"We flood communities with so many guns that it is easier for a teenager to buy a Glock than to get his hands on a computer," President Obama said before the mourners at the Morton H. Meyerson Symphony Center in Dallas. With this single quote, Obama connected all the ideas and issues surrounding the Black Lives Matter movement, violence against police, and the continuing racial tensions that remain unresolved in this country.

With this quote, President Obama showed that he isn't just interested in "thoughts and prayers." He's still around to get things done. Including specific policy issues that can be (and need to be) addressed. That's the best way to honor these officers' lives, because it's the best way to make sure that more of their colleagues don't die senselessly the way they did. Only by working toward solving the problems that ultimately led to the shooting will the country be able to avoid more of these tragedies happening again.

There's sure to be the typical criticism of "politicizing a tragedy" or "speaking too soon," as there always are when statements like these are made. But as Obama pointed out, attention is too quickly diverted away from these issues after tragic events happen, and that's part of the reason things rarely change. Striking while the iron is hot might seem callous, but it's better than living in a world in which police officers are gunned down by snipers and black men and women are killed in staggering numbers by police.

The good news is that you can help, really help, to work toward this goal. Email and/or call your congressional representatives, donate to Black Lives Matter and Everytown, and get all your friends to vote in local, state, and national elections this November. This country is in an unprecedented period of political inertness, and it's up to every citizen to make the changes they want to see.

President Obama's focus on change in this speech is really the perfect way to honor these officers, who cared so much about their community that they laid down their lives for it. Recognition, awareness, and commitment to solving all the problems that led up to the shooting is how the country makes sure that it never happens again.