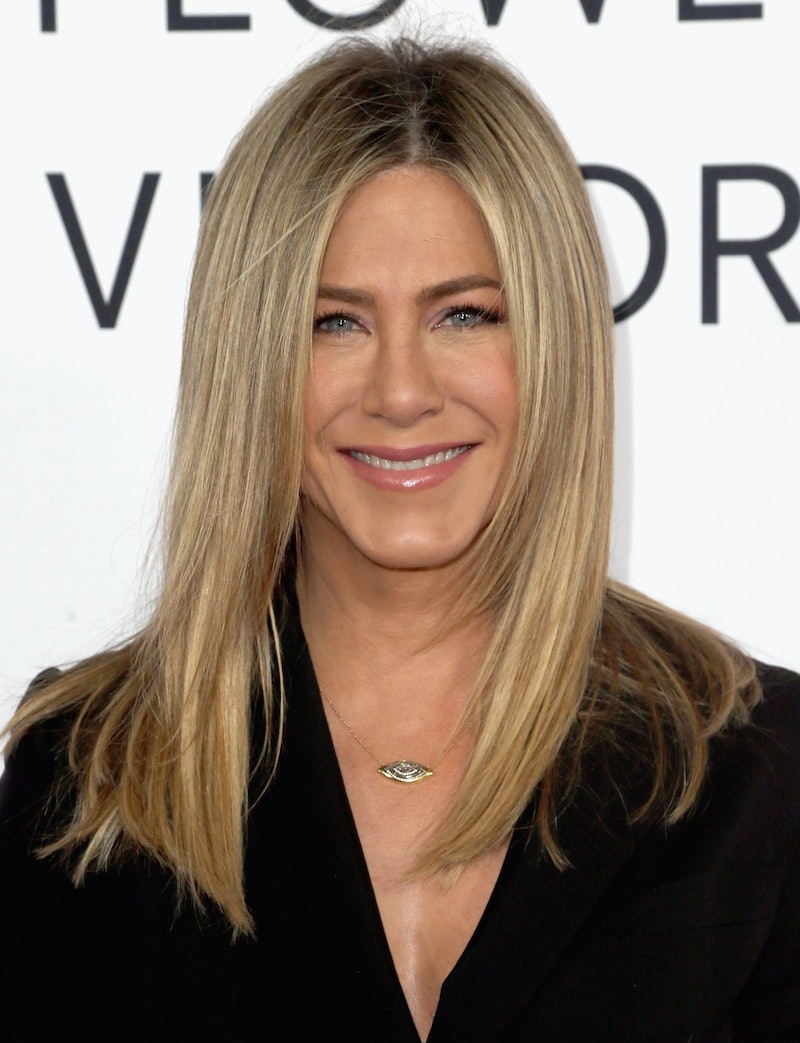 The latest celeb to speak out about the strikingly regressive treatment of female celebs in the media is none other than one who is no stranger to it. The Huffington Post has published an op-ed from Jennifer Aniston, in which she passionately writes on the negative relationship between tabloid journalism and the female celebrities who often fall under their spotlight. Aniston's history in the public eye is deeply entwined with the tabloids and the paparazzi who go to extreme lengths to secure photos of her. The piece is not only a vehement rejection of the practices of tabloids, it's a call-to-arms for women and men to end the endless objectification female celebrities are unwillingly subjected to.

Aniston writes that "[t]he way I am portrayed by the media is simply a reflection of how we see and portray women in general, measured against some warped standard of beauty. Sometimes cultural standards just need a different perspective so we can see them for what they really are — a collective acceptance... a subconscious agreement. We are in charge of our agreement." It's this subconscious agreement, she continues, that is not only sweepingly harmful to women in the long-run, but it allows for a harsh treatment of female celebrities who choose to keep a barrier between their personal and public lives.

Aniston's long relationship with the tabloid media has consisted of tons of speculation about her relationships, possible pregnancies ("For the record, I am not pregnant. What I am is fed up," she wrote in her op-ed) and her physical appearance — and shown in this ET Online post, published July 12. If you're old enough to remember the dissolution of her marriage to Brad Pitt more than a decade ago, then you know that there has been a media narrative of Aniston's life that painted her as a perpetually love-starved woman bravely plowing through the wreckage. Or, perhaps more recently, you've followed the "Is she or isn't she?" storyline about possible baby Anistons in the near future. Simply googling "Jennifer Aniston + tabloids" elicits a bevy of covers that seem to tear down Aniston unnecessarily. It's then that you may begin to understand her disgust with tabloids and why she is compelled to speak out.

Through her words, the battle cry resounds. I'm going to include here, as a coda, the words the ring the clearest for me.

I used to tell myself that tabloids were like comic books, not to be taken seriously, just a soap opera for people to follow when they need a distraction. But I really can’t tell myself that anymore because the reality is the stalking and objectification I’ve experienced first-hand, going on decades now, reflects the warped way we calculate a woman’s worth. [...] Here’s where I come out on this topic: we are complete with or without a mate, with or without a child. We get to decide for ourselves what is beautiful when it comes to our bodies. That decision is ours and ours alone. Let’s make that decision for ourselves and for the young women in this world who look to us as examples. Let’s make that decision consciously, outside of the tabloid noise. We don’t need to be married or mothers to be complete. We get to determine our own “happily ever after” for ourselves.

As a woman, writer and feminist, I'm cut to my core as I ponder to what level I've been complicit in perpetuating this tabloid machine and its treatment of female celebrities I look up to. I'm also empowered on a deeper level because I know that Aniston is rallying us all together to make a statement for change. In our current social and political climate, women can be seen leading the charge towards reversing a long history of negative treatment. Aniston has always been among those ranks but now she is visibly out in front. For that, I am in awe.