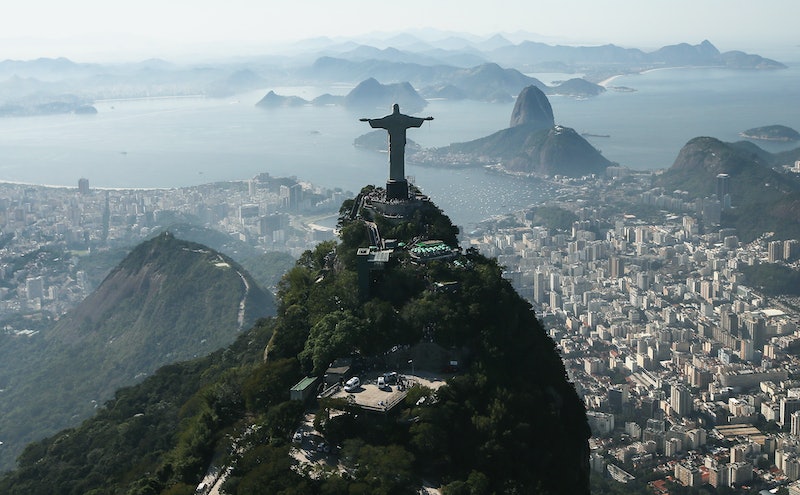 When it comes to the etymology of city names, few cities have stories as interesting (or misguided) as Rio de Janeiro. As the second-largest city in Brazil gears up for the 2016 Summer Olympics, non-Brazilians might be wondering: What does Rio de Janeiro mean?

The name "Rio de Janeiro" literally translates to "River of January" in Portuguese, which is actually a misnomer because there is no river in Rio. The popular account given is that Portuguese colonists mistook the Guanabara Bay (the city's large, beautiful bay) for the mouth of a river, and "discovered" it in Jan. 1, 1502, hence christening it the "rio" or river of "Janeiro" (Portuguese for "January"). Despite the somewhat amusing colonial flop, there is apparently some dispute by language scholars whether the term "rio" could have meant any large body of water in 16th century Portuguese parlance, Smithsonian Magazine reported.

The story behind the "January River" misnomer, however, goes much deeper than a linguistic fail. To me, as someone from Lebanon (another ambitious colonial failure), it implicitly tells the story of colonial hubris — colonists landing for the first time on new-to-them terrain and misguidedly claiming (and naming) the first landmark they see. This happened everywhere Europeans colonized, from re-naming the island of Borikén to Puerto Rico to the inclusion of the Lenape word Manhattan into the English language.

Smithsonian Magazine points out that Rio is often referred to as "Cidade Maravilhosa" (the "marvelous city"), but a term Rio residents use for themselves may be more telling about their colonial past. One explanation of the origin of the term "carioca," which has become synonymous with all things Rio (including its inhabitants), is that it's a derivative of an indigenous term meaning "white man's house," as a reference to the white colonists who took over the bayside city. While "carioca" has become a commonly-used cultural catch-all, its colonial roots haven't been forgotten.

The often-explicit legacy of colonialism is as present in Rio as it is everywhere else in the world. As all eyes focus on the beautiful Brazilian city hosting the Olympics, this legacy is likely to be swept under the rug as the European organizers pat themselves on the backs for finally holding the games in South America. Cariocas, however, will not forget, as the country celebrated as one of the most diverse places on Earth welcomes the rest of the world to their shores.

More like this
Read Dan Levy's Heartbreaking Message After The Club Q Shooting
By Stephanie Topacio Long
Iran Has Issued A Death Sentence Over Mahsa Amini Protests
By Catharina Cheung, Darshita Goyal and Maxine Harrison
Anguilla Is The Under-The-Radar Caribbean Destination You Need To Visit
By Rachel Lapidos
How Princess Anne Broke The Rules Of Royal Divorce
By Sophie McEvoy
Get Even More From Bustle — Sign Up For The Newsletter