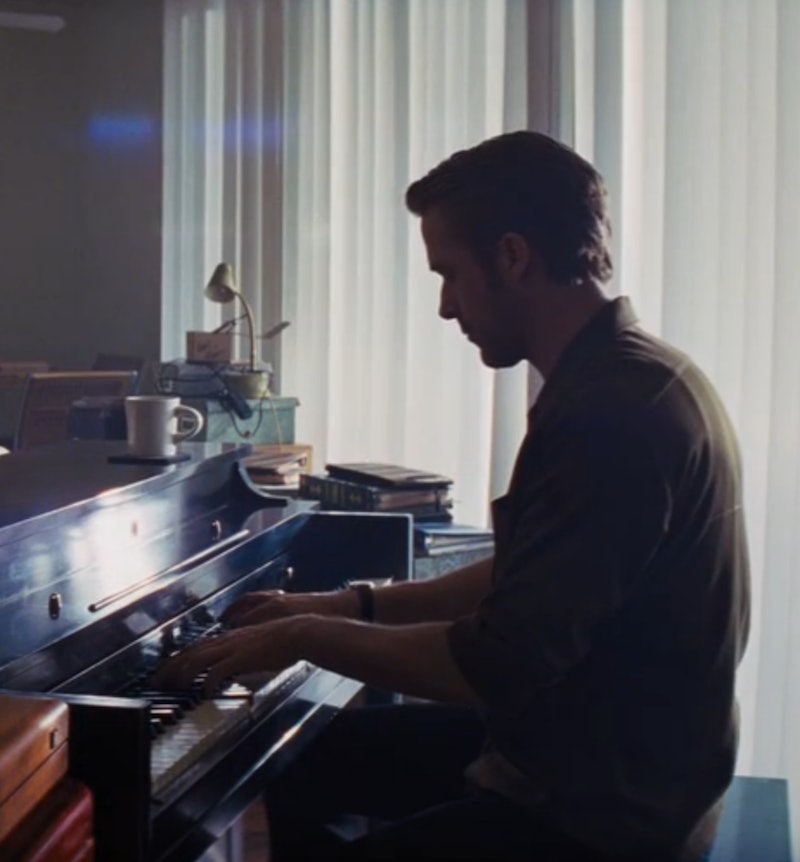 If you were of the totally legit opinion that there is nothing father/actor/auteur/feminist meme star Ryan Gosling can't do, then prepare to have your theory reinforced. Gosling sings in the La La Land trailer, and it's every bit as hauntingly beautiful as you knew it would be — because it's Ryan Gosling, so obviously. The man who makes the rest of us feel like sorry excuses for human beings serenades Emma Stone in his new romantic musical film, in his incarnation as jazz musician Sebastian, who, along with his girlfriend, aspiring actress Mia (Stone), finds the pressures of Hollywood tricky to deal with as he tries to make it big.

While the trailer seems light on clues as to exact plot details, the film is made by Whiplash director Damien Chazelle, so, as you might expect, music takes center stage. We can clock this in the trailer where the music demands our attention even more than the visuals, prompting us to listen more to Gosling's sweetly-crooned words than to pay attention to what's playing out on screen (aside from Stone's magnificent new eyebrows). If you're listening, you might notice the melancholy of the actor's lyrics. So what can we infer from the lines he sings?

"City Of Stars, Are You Shining Just For Me?"

Hollywood, right? The lyric summarizes how ironically universal the town's pull is, with everyone thinking the whole of Hollywood exists so that they and they only can ascend the ranks to the level of legendary Hollywood talent. But hey. Bright side: Hollywood boasts some of the most attractive waiting staff ever.

"City Of Stars, There's So Much That I Can't See"

We're all human. We're all flawed. This is the vibe, right?

"Who Knew? Is This The Start Of Something Beautiful?"

This isn't just a film about Hollywood and ambition and being a small town kid trying to make it in a big city (I assume). This is also about the similarly starry magic of your soul entwining with someone who looks like Gosling/Stone and who gazes at you like you're the last slice of double cheese pizza.

"Or One More Dream That I Cannot Make True?"

It's by the director of Whiplash. It's got Gosling in it, who likes his romances served with an indie twist. There's a minor chord flourish at the end of the song. I'm calling it: this love story is going to have a tragic ending.

So if you're into cinema starring hopelessly attractive people trying to make it in Hollywood (played by people who are totally crushing this whole Hollywood thing) then La La Land is the romantic musical for you. Similarly, if you're into films with gentle, melancholic soundtracks sung by someone with a voice almost as beautiful as his face, this could also be one to watch. Either way, check it out December 2 this year.

More like this
The Meaning Of Steve Lacy’s “Bad Habit” Lyrics
By Radhika Menon
Mimi Webb’s IRL Situationship Inspired “Red Flags”
By Catharina Cheung
What Is Mary J. Blige’s Net Worth? The 9-Time Grammy Winner Is Doing “Just Fine”
By Hugh McIntyre
Austin Butler Recalls Lisa Marie Presley Showing Him Elvis’ Bedroom
By Jake Viswanath
Get Even More From Bustle — Sign Up For The Newsletter
From hair trends to relationship advice, our daily newsletter has everything you need to sound like a person who’s on TikTok, even if you aren’t.