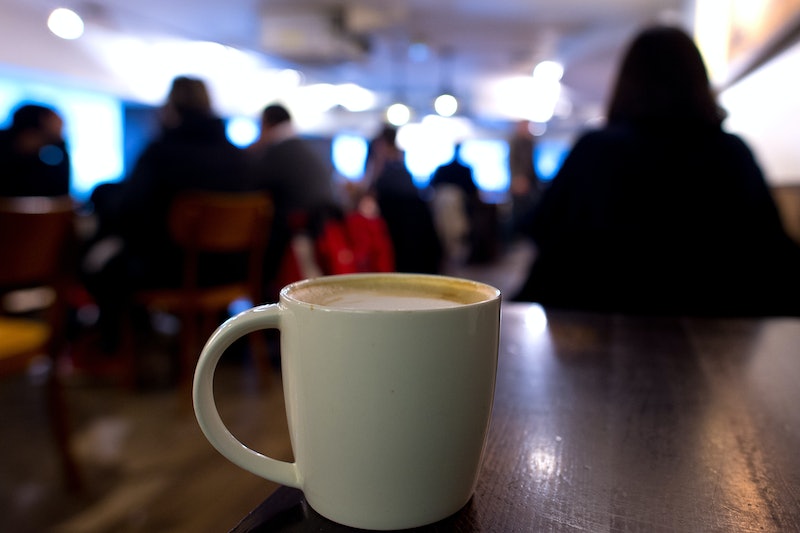 Coffee chains have been making a lot of headlines lately, largely thanks to the vast array of delicious Starbucks rainbow drinks. But there's a new colorful drink in town, and it's unlike anything you've seen before: The blue latte, also called a "smurf latte," is the latest creation from a vegan cafe in Australia. Naturally, social media users are having a ball with it. But what exactly makes it blue? Let's explore.

The cafe in question is Matcha Mylkbar in Melbourne. The latte is made with a few unique ingredients, including lemon, ginger agave, and coconut milk. But the blue hue? That comes from the teaspoon of blue algae powder they add. Yep, you read that right: Algae. Does that mean it has a plant-y, seaweed-taste? Naw. But although many people think it's going to be super sweet and bubblegum-like, that's not the case, either.

Co-owner Nic Davidson cleared it up, telling Mashable Australia, "You can definitely taste the agave and the lemon. It's a quite sweet and 'soury' kind of taste," he said, adding that it's a bit difficult to explain. The drink isn't even on their actual menu yet, but that hasn't stopped people from talking about it all across social media.

The 40-seat cafe sold more than 100 brightly colored lattes in a single weekend, with many people referencing Instagram photos when ordering.

Some research argues that algae is one of the most nutrient-dense foods on the planet, with certain forms carrying tons of protein and over 65 vitamins, minerals, and enzymes, plus amino acids, beta-carotene, and possibly B12. This makes me think I should sprinkle algae powder on everything. Blue salad! Blue pizza! Blue pasta! Kidding. To be extra safe, you should always check with your doctor before supplementing your diet in any way.

While the smurf latte was born in Australia, I feel like it's only a matter of time before a close relative finds its way to the United States. People are obsessed with creative coffee drinks, and I can already smell a purple latte, pink latte, and orange latte rounding the corner.