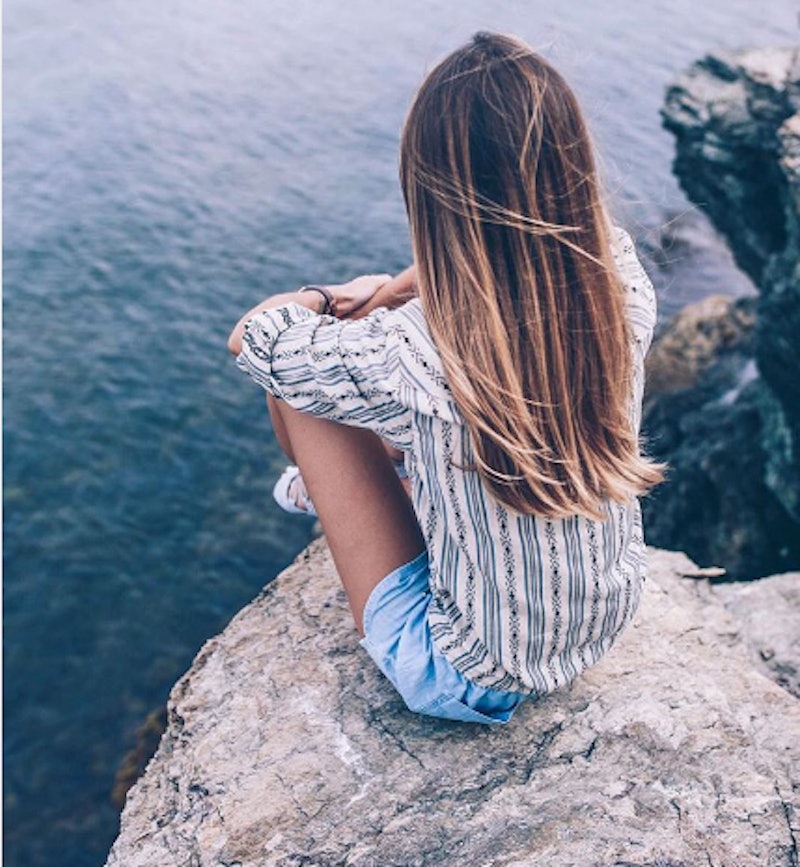 When you have a friend that constantly hurts your feelings, it might be time to do the hard thing and call it. Breaking up with a toxic friend can be just as hard as saying goodbye to a significant other, spurring on afternoons filled with Ben & Jerry's ice cream and blanket cocoons. But when someone you trust constantly belittles you, tears you down, or makes you feel like less worthy of respect and love, then that person has got to go. And quick.

But it's easier said than done, isn't it? One afternoon you make up your mind and decide to phase them put, and the next you find yourself sharing an appetizer during happy hour. Just like in any breakup, letting go someone you once cared about is hard, and it takes some trial and error. So in an effort to make the process easier for you, here are 11 tips on how to break up with a toxic friend without feeling guilty. Use them and you might just shake off that "welcome mat" feeling for good. You deserve to surround yourself with people that appreciate you and build you up — it's time to kick the bad out.

Before you start thinking dark thoughts and creating voodoo dolls, take a moment and go the direct route: Address the issue with your friend. That way if it's time to draw the friendship to a close, the person won't be blindsided. They'll recall all the times you've called them out for hurting your feelings. Relationship expert Alexis Nicole White shares with Bustle, "Addressing the specific issue without being confrontational is best so that you can bring their offensive behaviors to their attention. Many times, people don’t even realize that they are offending you." Don't bite your tongue when they do something that stings — let them know that's not a way you let yourself be treated.

Another good way to begin the breakup with a toxic friend is to start to create boundaries. You're no welcome mat, and they need to realize that. White recommends, "Affirm your boundaries whenever this person continues to cross the line and take things too far. Let them know, firmly, that respect is a principle foundation in any relationship; and you perceive those lines to have been violated with their comments." If your friend is being toxic, then they deserve to know that their behavior isn't acceptable.

3. Make It About Yourself

Rather than feeling guilty of breaking things off and hurting their feelings, make yourself the priority. Karen Valencic, an expert in conflict-resolution, told CBS news, "It's a matter of who do you say yes to. It's based upon how you see yourself as valued." If you let them walk all over you, you don't see yourself as worth much value. If you think that's wrong, then that should motivate you to put an end to it.

4. Convince Yourself With A Few Pointed Questions

In order to convince yourself this pal has no use in your life any longer (other than to make you sad,) Valencic also suggested asking yourself these four questions: "Can I trust you? Are you committed to excellence? Do you care about and respect me? Do we bring out the best in each other?" If you answer "no" to any of these questions, it will hopefully help you see that that person doesn't contribute anything to your life other than negativity.

You don't actually have to give anyone a reason for doing what's best for you. If you feel like it's time to move on, keep your breakup short and simple, without much room for argument. Lifestyle writer AJ Harbinger from lifestyle site Art of Charm explained, "Any explaining you do is more for you than for them. Again, tell them how you feel, which is a subject not open for debate. Or, if you prefer, keep it simple: Tell them calmly and kindly that you don’t want them in your life anymore, and leave it at that." Giving long drawn explanations are more for helping you appease your guilt — and you have nothing to feel guilty over.

6. Talk In A Public Place

While this helps cut down the possibility on a major scene, this also give you the option of ending the interaction on your terms, not theirs. Harbinger offered, "If you run into problems, you can just get up and leave." Whereas if you invited them over to your apartment, it would be up to them to finish it and leave.

7. Unfriend Them On Social Media

You don't need to be creeping on what dish they ate at the Thai place, and they don't need to know what you've been doing on Friday nights. As White points out, "There is no need for either party to have insight to who this person is and where they’re going or what they have become. Social media provides unnecessary information that can spawn feelings of jealousy, resentment and additional gossip that is not needed." Make the break clean and complete — you might be curious, but don't leave and strings attached that might lead them back to you.

8. Start To Slowly Pull Away

If you start ignoring all their phone calls or begin bailing on hangouts, they might become more persistent because they'll feel guilty over the cold shoulder. Instead, start disassociating yourself gradually. White explains, "Maybe you’re not answering their phone calls as often or you don’t hang out with them as much. Your social circle is supposed to be genuine and sincere; full of happiness, admiration, love and support. If you’re not getting that from your friends, it’s time to dump them like any other bad partner in your life, and unapologetically move on!" By slowly phasing them out, they'll also feel like the friendship is running its course.

Go into this conversation knowing that this isn't an open-forum debate. This is you telling them what the situation is, and then leaving. Make a promise to yourself to avoid any arguments and just leave firmly and quickly. You're simply dropping off news, not starting a conversation. Harbinger suggested, "Firmly restate your boundaries, then end communication. You’re not trying to 'debate' the person into leaving you alone. This isn’t a negotiation."

This is such a grownup move, and totally necessary if you want the last chapter on your bad friendship to be closed. Rather than just phasing them out, let them know you can't be friends any longer. White suggests, "Have a conversation with them to not only address the situation with facts as to what they specifically did, but offer them an insight into your feelings by saying, 'When you did this… you made me feel like this.'" By giving specific reasons, you won't just be "that jerk that let the friendship go" in their head — they'll know it was on them.

In order to let go of the terrible feelings an encounter like this can create, TODAY recommended trying this exercise from Radical Forgiveness by Colin Tipping, "Write three letters to your friend. The first should be written to express and release all your emotions. The second can have a softer approach, with fewer negatives and more compassion. The third letter could include what role you might have played during the friendship that inhibited it from lasting." Don't send the letters, but use them as an outlet to let go.

So what do you think — are you ready to kick the toxicity out of your life?