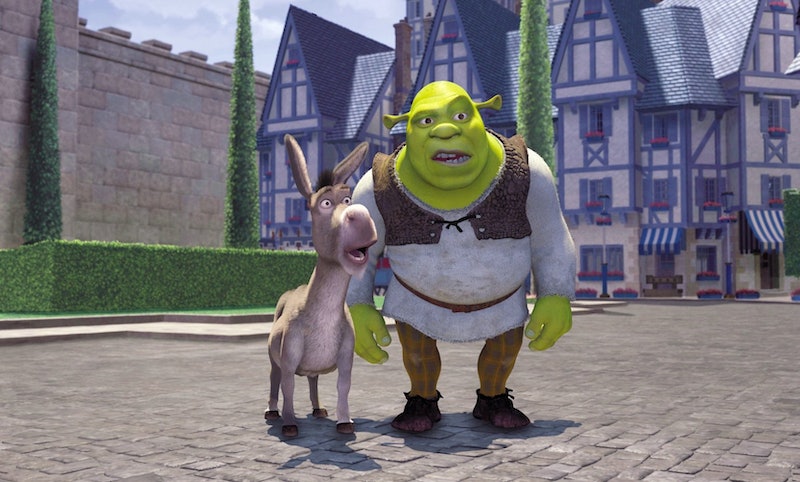 Is there anything more horrifying than sitting down with your family to watch a seemingly innocent movie only to put it on and realize it's utterly and completely dirty? I don't think so. Believe it or not, there are a lot of movies out there masquerading as innocent when in reality they're riddled with sexual innuendo and dirty jokes. I'm not mad about it, but you can't blame me for not exactly wanting to watch a joke about oral sex while sitting next to my grandmother. There's nothing worse than realizing that a so-called innocent movie is actually dirty.

There are some movies that are so blatant about their use of dirty jokes and innuendo that you're almost relieved. It's nice to know, upfront, what you'll be getting. But it's those other movies, the ones that make you think they're going to be simply heartwarming and funny, that really get you. These films market themselves as kids movies or parodies of romantic comedies so well that their actual dirtiness shocks you like an exposed socket. You know the ones, right? No? Well, in that case, I've compiled a list of 16 dirty movies you probably always thought were innocent. Now, you'll know what you're getting into next time mom suggests one for movie night.

Sure, on the surface Shrek seems like an innocent, animated fairy-tale. But in reality, it's about as dirty as you can get. Take the above video, for instance. Lord Farquaad is getting ready for some, ahem, alone time.

Surely, a movie made in the 1930s can't be dirty, right? They wouldn't even show couples sleeping in the same bed back them. But sure enough, with a re-watch, you'll see that Bringing Up Baby is the furthest thing from innocent. Just look at those gifs... if that's not a sex joke then I don't know what is.

This one may or may not be a little obvious. On the surface, it seems like an innocent half cartoon/half live action movie but really, it's one giant dirty joke after another. Like when Jessica Rabbit exclaims that she loves her husband more than almost any other "rabbit." And she's not talking about the animal.

Another animated movie that seems like a fun, lighthearted, family affair but is actually riddled with adult humor. Case in point: the above gif. It's still a great movie, though, plus, Chel, the main female character, is in control over her own sexuality. It's pretty feminist, when you think about it. Rock on, El Dorado, rock on.

The ugly truth is that this movie is not just a romantic comedy, but is actually completely and utterly filthy. What you might think is an innocent enough movie to watch with your parents is actually the biggest mistake you (and I) will have ever made. Don't believe me? There's a whole scene dedicated to the misuse of vibrating panties in a restaurant.

A movie that hinges on a virgin lighting a candle to bring back these evil witches — sounds pretty dirty to me. Plus, there are all the innuendo jokes about "wanting children" and the bus driver who assures the ladies, "it might take a couple of tries." Regardless of its dirtier nature, Hocus Pocus still remains one of the greatest movies of all time.

I know, I know, how could I ruin this beloved childhood favorite? Well, sorry to say, it's not just Toy Story that's secretly dirty but Toy Story 2 and Toy Story 3. They all have a plethora of dirty jokes and innuendo. There's the "hooker" toy from the first one, Buzz's wing erection, and the oral sex joke from Mr. Potato Head in the third. Those aren't the only examples, but next time you watch these beloved movies, keep an ear out for not-so-innocent banter.

There's not much to say about Spaceballs other than that if you think it's just an innocent, comedic Star Wars parody, you should sit back, buckle up, and prepare for a slew of innuendo. I mean, they manage to make the lightsaber into a penis joke. If that doesn't tell you what you're in for, then I don't know what will.

From the "sticky bandits" to Uncle Kevin suggesting his penis size to Marv's "hole" jokes, Home Alone 2: Lost in New York is riddled with suggestive humor and innuendo. Don't say I didn't warn ya.

With a dance sequence so iconic and beloved that it's become part of the pop culture lexicon, there's no way that Flashdance is dirty and gross, right? Wrong. While it's the heartwarming story of the stripper who just wants to dance, it's also a filthy and dirty and sexy movie about a woman who meets a man and their sexual chemistry is through the roof. There's a whole foreplay scene at a restaurant that will make you sweat bullets.

It's one of my favorite films of all time, but there are about a million things I'd rather do than sit through When Harry Met Sally with my parents. It's a romantic comedy, yes but there's the orgasm scene plus about a million other conversations about sex. NSFPW (not safe for parent watching).

14. There's Something About Mary

No, Mary, that's not hair gel. This seemingly fun romantic comedy is far dirtier than one might anticipate.

A movie about summer camp starring the top comedians of today? Sounds like a pleasant family film, but that's so, so wrong. I knew licking a spoon could seem sexual, but they really manage to take that scene and turn it up to 11.

On the surface it seems like a fun movie staring Tom Cruise who wears a dress shit and slides around his house. In reality, it's about a teen who sleeps with a sex worker on a train and has a giant party with all of her friends in order to raise money to fix his dad's car., more or less. It's a lot sexier than you'd think, but then again, the title is Risky Business.

So there they are, 16 dirty movies you might have thought were actually pretty innocent. Some of them were a bit more obvious than others but in the end, I think we can all agree that a little innuendo never hurt anybody. And sometimes, half the fun is trying to figure all those dirty jokes out.

More like this
'Dirty Dancing's Jennifer Grey On The Tearful Moment That Changed Her Relationship With Patrick Swayze
By Sam Ramsden
Why The '365 Days' Sex Scenes Are Good, Even If The Movies Aren’t
By Arya Roshanian
The 'Hocus Pocus' Sequel Finally Has A Release Date & It Makes Total Sense
By Shannon Barbour and Radhika Menon
A 'Bridgerton' Star Just Dropped A Major Hint About Joining The Live-Action Barbie Cast
By Bustle UK
Get Even More From Bustle — Sign Up For The Newsletter