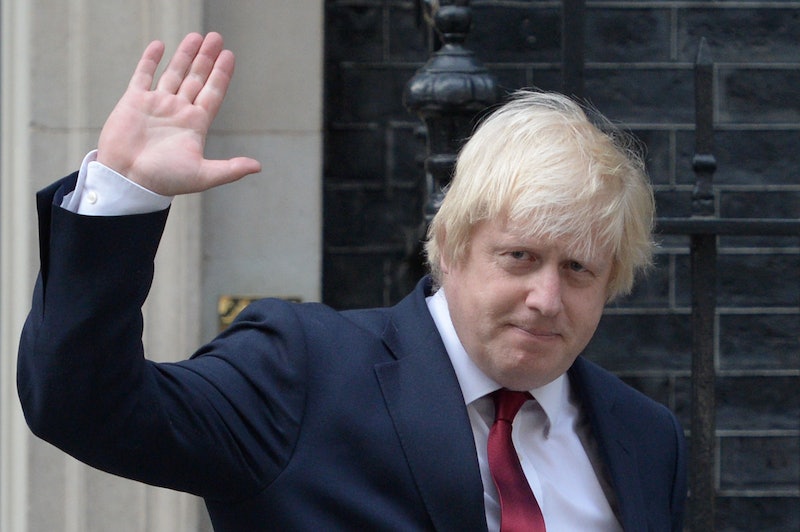 Don't look now, but the most famous helmet-haired politician this side of Donald Trump is stepping back into the public spotlight, just weeks after the Brexit vote shook up United Kingdom and an apparent betrayal by one of his former allies seemingly halted his political rise. Yup, that's right ― Boris Johnson has been named Britain's foreign secretary, and so soon after pushing Britain to withdraw from the EU. People are having a pretty good laugh about it.

The news was announced on Tuesday, on the first day of the Prime Ministership of Conservative Party leader Theresa May. Johnson is himself a member of the Conservative Party, having previously served as the Mayor of London from 2008 to 2016, and a member of parliament from 2001 to 2008. He was also one of the front-and-center faces of the pro-Brexit movement, and had been considered a favorite to become Prime Minister before his bid was derailed by Conservative MP Michael Gove.

He didn't stay out of the limelight for long, however, as it only took weeks for him to end up in May's cabinet, despite his popularity having sunk significantly since the Brexit vote and his withdrawal from the leadership race. And thanks to the position he finds himself in ― being appointed secretary of state for foreign and commonwealth affairs so soon after convincing Britain to leave the EU ― he's getting a pretty good roasting on social media right now.

The reason people are finding this so ... well, funny or horrifying? On the one hand, you've got Johnson's stunning fall from grace, and similarly stunning resurgence into a role few if any would've envisioned him in. It's also a considerable downgrade from what everyone basically knows his real ambitions were, which plenty of progressive Britons are pleased with.

It's important to note that, for all the goofy-looking moments and his sort of "political fool" public image, Johnson has said some very controversial, inflammatory things. He's previously been heavily criticized for homophobia in some of his writings, and in the final months of the Brexit campaign, he theorized that U.S. President Barack Obama was opposing British departure from the EU because of "ancestral dislike" of the former empire due to his part-Kenyan heritage. (Kenya was a British colony until 1964.)

The other part of it, though, is the more pragmatic question. Can he actually do the job? Is this truly the person who's best suited to navigate British diplomacy and national interests? And what about intelligence? The foreign minister is also in charge of the British secret intelligence service, MI6 — a fact which has not been lost on some people.

In any case, strap yourself in, because Boris Johnson is now ― once again! ― one of the most consequential political players in Britain. The only real question now is whether he'll be able to do well enough to burnish his credentials for another leadership push in the years to come. But based on current expectations, you might not want to hold your breath.

More like this
How To Fight For Reproductive Rights, Based On How Much Time You Have
By Courtney Young
10 Times Boris Johnson Got It Wrong On Trans Rights
By El Hunt and Sam Ramsden
President Zelensky Spoke Out On Ukraine's Chances Of Hosting Eurovision Next Year
By Sam Ramsden
Manchester Arena Attack 5 Year Anniversary
By Ella Glover
Get Even More From Bustle — Sign Up For The Newsletter