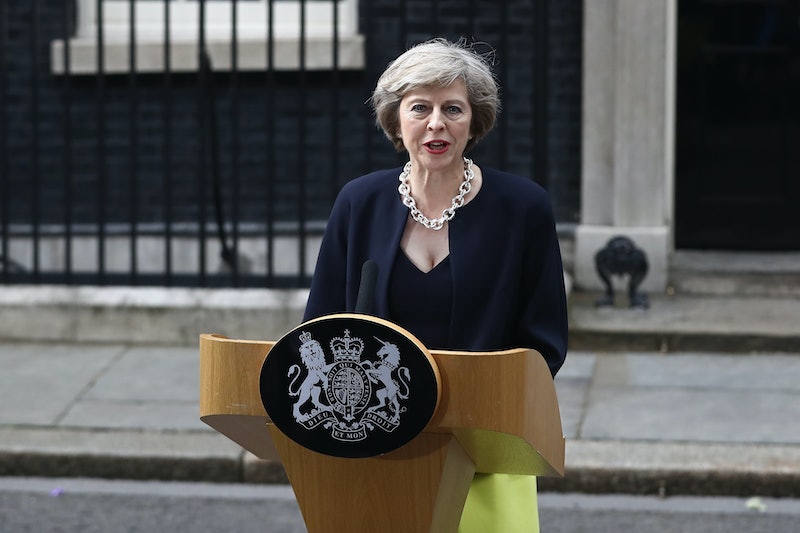 On Wednesday, former British Home Secretary Theresa May took over the position of Prime Minister of Britain from David Cameron. Cameron resigned after calling for the "Brexit" vote with the intention of unifying his Conservative Party against leaving the European Union, only to have the "Leave" camp win. Many of May's policies are likely to appeal to UK citizens who voted to leave the EU, though she hardly weighed in herself during the debate. Theresa May's political stances span the spectrum, depending on what policy area you're looking at.

One aspect of May's policy stances particularly relevant to the times is her tough position on immigration. The Brexit vote was partly fueled by citizens' sentiment that too many immigrants were entering Britain. Under May's charge, the Home Office instituted yearly income minimums that British citizens would need to make in order to bring spouses and children from other countries into the UK. In April, the minimum was set at £35,000 (or about $46,000) a year for those in the UK for under 10 years. May has been a longtime advocate of reducing the number of immigrants in Britain.

May's stance on freedom of movement — something European Union membership facilitates between its member countries — is also Brexit-friendly. She stated, "We need to bring control into movement of people coming into the UK from the EU."

Following the June 23 referendum, questions arose concerning whether Britain would actually leave the EU. The vote wasn't binding, and in order to go through with the exit, the prime minister would need to initiate the action. There was also talk of a potential second vote on the matter. May made it very clear that, as prime minister, she will initiate the exit in late 2016:

Brexit means Brexit. The campaign was fought, the vote was held, turnout was high, and the public gave their verdict. There must be no attempts to remain inside the EU, no attempts to rejoin it through the back door, and no second referendum.

But Brexit-related positions aren't all May is putting forth. In a speech leading up to the announcement of her assumption of Cameron's old position, May said that she wants to implement an array of programs for workers, women, people in poverty, people of color, and people with mental health issues. She acknowledged several inequities in British society:

[I]f you’re born poor, you will die on average nine years earlier than others. If you’re black, you’re treated more harshly by the criminal justice system than if you’re white. If you’re a white, working-class boy, you’re less likely than anybody else to go to university ... If you’re a woman, you still earn less than a man. If you suffer from mental health problems, there’s too often not enough help to hand.

May said she'd be hammering out the details of her social and economic programs in the coming weeks, but offered a few concrete examples in her speech. She thinks shareholders should have the power to determine CEO salaries, she wants workers to be represented on company boards, and she wants more houses built for Britain's homeless.

May's conservative stance on immigration and freedom of movement are an interesting mix with her more moderate positions regarding social and economic programs for those who are disadvantaged in British society. She doesn't fit neatly into any political box; we'll see how well her eclectic politics work for her as prime minister.