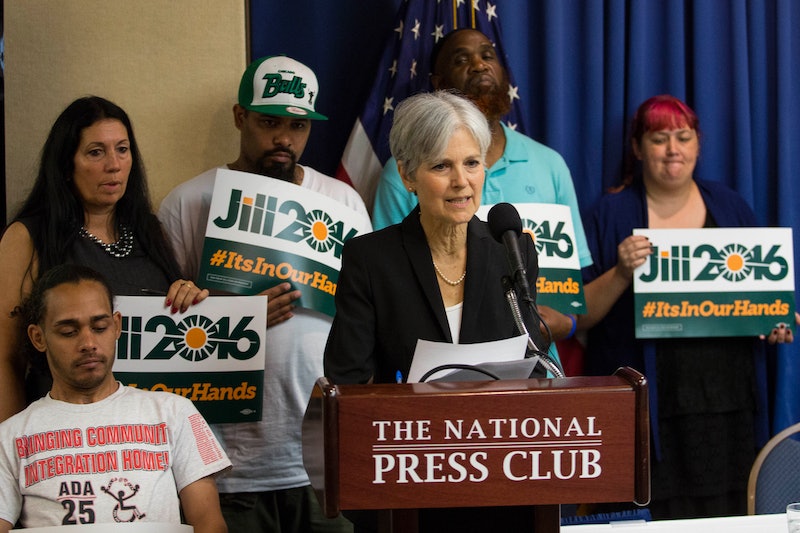 There's no resisting it anymore. Sen. Bernie Sanders is no longer in the running for president. He lost the Democratic primary, and he endorsed Hillary Clinton for the job. As disheartened supporters grieve the campaign's end, many are grappling with what to do next, particularly at the voting booth in November. Should you vote for Jill Stein? The presumptive Green Party nominee told US Uncut Wednesday that, in the 24 hours following Sanders' endorsement of Clinton, she has seen a tenfold increase in donations to her campaign. This is perhaps not surprising, given the similarities between her platform and Sanders'. But not all voters will be so quick to go Green, given the fear of the dreaded "spoiler effect."

Widespread antipathy toward Clinton among the electorate is topped only by disdain for the presumptive Republican nominee, Donald Trump. Voters on the left who aren't enthusiastic about Clinton are coming up against a harsh reality. If they vote third party instead of settling for Clinton, they will be increasing the likelihood that Trump wins. The spoiler effect will be more than enough to encourage many would-be Stein voters to begrudgingly support Clinton in November. But there is a way to vote for Stein without helping Trump.

The idea, called VotePact, comes from political activist and writer Sam Husseini. The first step is to find someone on the right who is reluctant to vote for Trump — someone in your state, since the Electoral College allocates electors on a winner-take-all basis in almost every state. Next, you and your "vote buddy" on the right both agree not to cast a "lesser-of-two-evils" vote (you won't vote for Clinton, and your buddy won't vote for Trump). You each agree to find third-party candidates who represent your respective politics, and agree to vote for them.

By following this model, you take a vote away from both Clinton and Trump, so neither major-party candidate is advantaged by your and your buddy's votes. This is about more than just avoiding the spoiler effect; by taking a supporter away from each major party, it's an act of resistance against those establishments. It shows both parties that voters can and will pursue options that better represent them, rather than fall in line with the major parties in election after election.

In addition to weakening the major parties (if the VotePact model were enacted by a lot of voters), third parties would be strengthened by greater support. Third parties are highly disadvantaged by a relative dearth of media coverage, difficulties accessing presidential debates, and a lack of government campaign funding. More voters means more visibility. It could also mean a podium on the debate stage if a third-party candidate polls with at 15 percent or more of support throughout the general election. And it could mean qualification for government funding in the next election cycle, should a candidate earn at least five percent of the popular vote in November.

Sanders' campaign showed that there is widespread support for progressive policy in the United States. If you don't think the Democratic Party will incorporate such ideas, you can be part of directing the momentum his campaign generated toward Stein's campaign and the Green Party — without helping Trump. That could mean good things for progressive politics going forward.

Should you vote for Stein? If concern about the spoiler effect was causing your hesitation, it doesn't need to. Connect with one of your conservative friends from high school on Facebook. Chat with your neighbor from whose window you hear a constant stream of The O'Reilly Factor. Connect with Republicans and right-leaning independents in your life, and ask them how they feel about Trump. If one of them is as conflicted about him as you are about Clinton, you might have just found yourself a vote buddy.