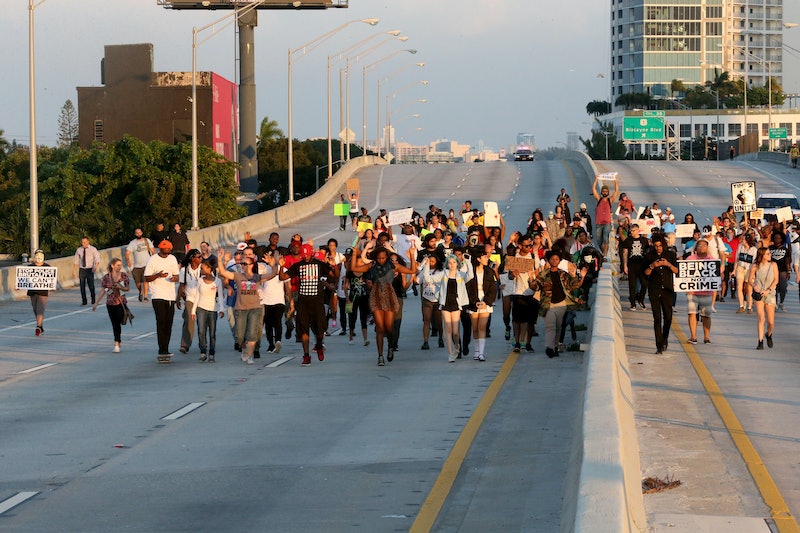 More than 40 protesters in support of the Black Lives Matter movement were arrested after they temporarily shut down a highway in Minneapolis, Minnesota, on Wednesday morning. They were protesting to demand justice for Philando Castile. But a highway protest is not unique to Minneapolis; last week, activists shut down the Bay Bridge in California that runs between Oakland and San Francisco. Protesters have blocked the Dan Ryan Expressway in Chicago, as well as highways in Atlanta and St. Paul, Minnesota. Highways are a center of civil rights organizing, and there's an important reason for that: Many major highways were constructed as tools of segregation, to separate marginalized populations, especially black communities, in urban areas from everyone else.

Take the Dan Ryan Expressway as an example. Former Chicago Mayor Richard Daley intended the Dan Ryan to separate white neighborhoods on the city's South Side from the poorer black neighborhoods to the east. New York offers another example: A planner named Robert Moses was notorious for using highways to clear slums in poor minority communities, such as in the South Bronx. These decisions were no accident: Many major roadways are explicitly designed to separate wealthier white communities from poorer communities of color. Therefore, it is also no accident that organizers are reclaiming and shutting down these highways as an act of protest.

The resulting highways were then meant to speed whites who'd moved to the suburbs back and forth to jobs and attractions downtown, leapfrogging minority communities along the way. ... And often, highways that passed through black communities weren't planned with on- and off-ramps to them.

A common argument against the Black Lives Matter highway protests is that they're "inconvenient," or that they might endanger people by stopping emergency vehicles in their tracks. But protests on major roadways are not arbitrary; they are intentional, and as activism generally aims to do, these protests are focusing on creating disruptions that will draw attention to the fact that black people's lives are at stake. Given that much of the transportation infrastructure in the United States has centered around the needs of wealthier white communities at the expense of poor communities of color, these protests are a chance to reclaim space and demand justice as an urgent priority, not just as an afterthought.

Being able to move about freely on interstate highways and using public transit is a privilege that is not afforded nor accessible to everyone. Civil rights organizing has long been about challenging these discrepancies, from the Selma march to the Freedom Rides; seeking a more egalitarian approach to mobility is not a new or radical idea. If you're stuck in traffic after a day of work because a protest has shut down the highway you usually take, keep this in mind: The fact that people are dying, which is the catalyst for these protests, should probably take precedence over your irritation that your privilege is being unsettled.