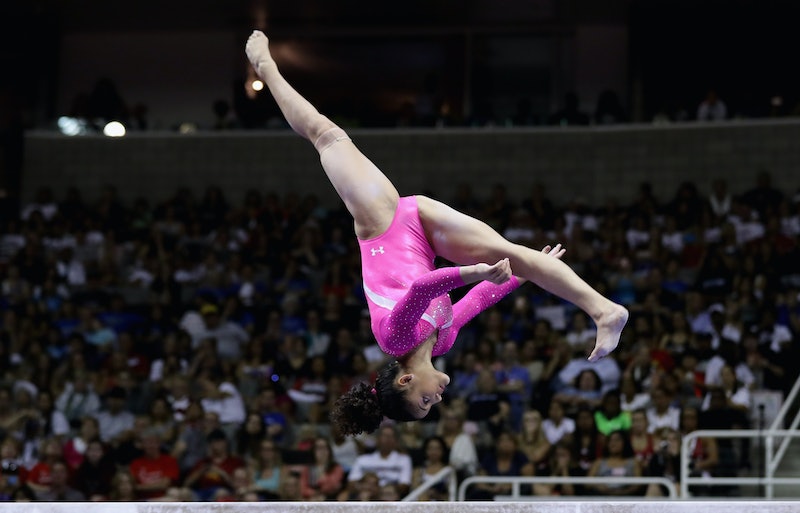 If there's one thing to love about gymnastics during the summer Olympics besides the gymnasts' fun floor routines, it's their sparkly uniforms. Does it make you regret quitting gymnastics as a kid, yet? For the amount of movements Olympic gymnasts do during their routines, you barely see any fashion faux-pas happening.

If you can believe it, the leotard has been since the late 1800s. Jules Leotard invented the flying trapeze in 1859, and his outfit was dubbed "leotard" afterward. The leotard was originally for men only, but the garment has become an iconic outfit for both dancers and gymnasts alike, and it's been through a lot of fashion changes ever since the leotard's inception.

For decades now, GK Elite has designed the U.S. Olympic women's gymnastics leotards, according to an article from Buzzfeed. While GK Elite says the engineering and testing of their leotards helps them stay on better, there are other tricks gymnasts use to make their leotards stay in place during competitions and performances.

Gymnasts (and dancers alike) often apply "butt glue" along the outline of their leotards, according to Livestrong, to make it stay in place. "Butt glue" is actually body adhesive that was first used in pageants to keep swimsuits from riding up. And for even more coverage, some gymnasts will wear briefs or body liners underneath their leotards — just in case any wardrobe malfunctions may happen — according to executive vice president of design and corporate relations at GK Elite, Kelly McKeown, in an interview with Buzzfeed.

So that's how Gabby Douglas gets her leotard to stay on during moves like this!

And another secret to the Olympic leotards? The crystals on the leotards are Swarovski crystals, which is why they are so sparkly on camera.

Now that you know all the secrets, doesn't it make you appreciate these Olympians even more? Not only do they have to accomplish near impossible jumps and flips, they have to also worry about keeping their uniform on. Praise these athletes!