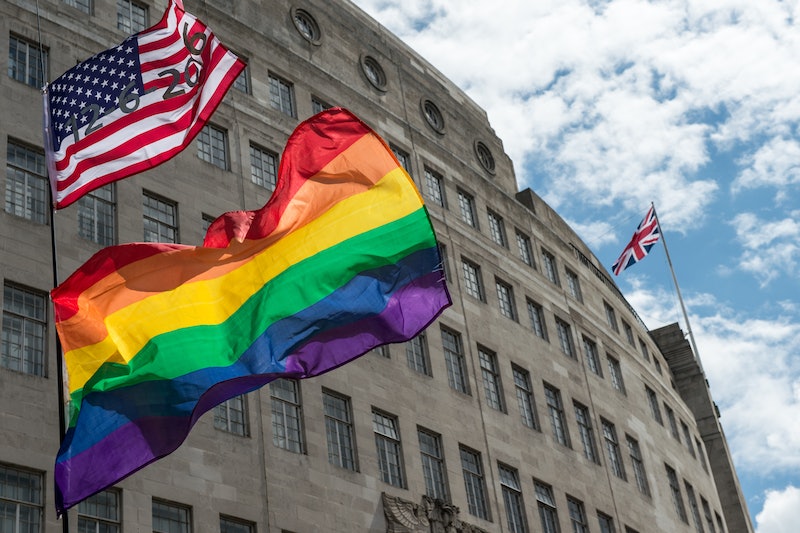 With all the media focus on Trump's last-minute vice president pick right before the convention, there's been little attention paid to the actual Republican platform. But it's time to shift focus to what a Trump presidency could mean. For LGBTQ rights, this year's platform could be the worst one ever, the Log Cabin Republicans said last Tuesday. In a fundraising email, the group's president, Gregory Angelo, said, "Moments ago, the Republican Party passed the most anti-LGBTQ Platform in the Party's 162-year history."

Delegates debated last Monday and Tuesday on many issues ranging from coal-powered electricity to women in the military. Overall, the policies adopted were a rightward shift from the 2012 GOP platform, which was already far from a middle ground. It seems, though, that no policy area saw a bigger change than LGBTQ rights. The delegates repeatedly rejected attempts to add language that would have denounced discrimination of LGBTQ Americans, and instead they adopted policies that would push to roll back many of the hard-fought advances gay Americans have won in recent years.

Among those is same-sex marriage. As Angelo put it, "Opposition to marriage equality, nonsense about bathrooms, an endorsement of the debunked psychological practice of 'pray the gay away' — it's all in there." The specific language regarding same-sex marriage is frustrating — it calls for a reversal of the 2015 Supreme Court ruling that legalized marriage across the country and defines marriage "as the union of one man and one woman."

The trans bathroom plank is not surprising either. Republicans have jumped on the issue as a scare tactic and have proposed more than 40 anti-trans bills in state houses across the country in 2016 — the most ever, according to the Human Rights Campaign — and that was just as of February.

More shocking is the inclusion of the anti-gay conversion therapy, a debunked practice that attempts to change a person's sexual orientation or gender identity. Using the practice on minors is already illegal in five states and the District of Columbia. The Southern Poverty Law Center denounced the move. "Not only has conversion therapy been proven to be fraudulent, it can cause grave harm, up to and including suicidality. And it tears families apart," said David Dinielli, deputy legal director of the group's LGBT Rights Project, in a statement.

None of this is a surprise given who was on the platform committee. The Daily Beast reported on at least four members with extremely anti-LGBTQ views, one of whom was Cynthia Dunbar. She's a Virginia Republican who compared gay activism to "the same type of thing that was done in pre-Holocaust Germany, as far as propaganda and presentation and swaying the whole mindset of a nation." Or, even better, Missouri Republican Hardy Billington, who placed a newspaper ad claiming homosexuality was killing people "two to three times the rate of smoking."

Their voices must have overpowered the first LGBTQ Republican ever on the platform committee, Rachel Hoff. She spoke with TIME about her experience in Cleveland, Ohio, telling the magazine that her treatment has even led her to consider leaving the Republican party. Hoff said she joined the committee to "soften" anti-LGBTQ language, not to endorse marriage equality or trans rights. "I really wanted to keep it focused on what I thought was a reasonable approach, just acknowledging and respecting that Republicans have different beliefs on these issues," Hoff told TIME.

Not even that was palatable to the right-wingers; it was defeated despite Hoff's impassioned sales pitch. "We are your daughters. We are your sons, your friends, your neighbors, your colleagues, the couple that sits next to you in church," she told the committee.

Perhaps Hoff should have stuck with electability. Far more than a majority of young Americans will likely vote for Clinton in the fall, and LGBTQ rights can be a make-or-break issue for many young voters.