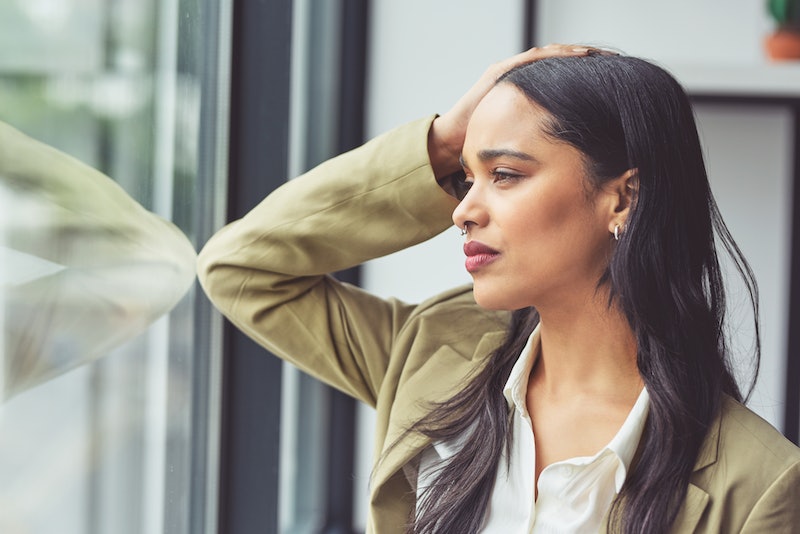 Our concept of "paranoia" from films and television is centered around usually-comedic characters who think people are poisoning the water or reading their minds. But the reality of a particular kind of personality disorder is a more complex one: paranoid personality disorder (PPD) isn't related to delusions about aliens or malevolent secret "forces" in the world. It's related exclusively to other people, and sufferers view all other humans as potential threats who may at any point, for no reason, hurt or demean them. To be diagnosed with PPD, you have to have more than just a mild distrust of others; you have to exhibit, over a long period, an enormous, "omnipresent sense of distrust and unjustified suspicion," as Psychology Today terms it. It's a constant part of their life.

People with PPD can be, at first glance, reliably "adult" friends; they're likely to look rather unemotional and cool, and have incredible trust in their own abilities and understanding of the world. But what lies beneath, as many people discover in friendships or intimate relationships with them, is a distorted world view in which they feel constantly threatened and are prepared to "defend" themselves in intense and often aggressive ways. We're not entirely sure how PPD develops, though it seems more common in families with genetic histories of disorders like psychosis and schizophrenia, and some research suggests that a traumatic, unsafe childhood may contribute to its development. But understanding what it looks like in others may help you diagnose why a friend just doesn't seem to believe that the bank teller wasn't deliberately insulting them, and can't stop talking about it.

Here are seven signs of paranoid personality disorder in others. If you observe them, be aware, as I'll explain, that pointing it out to them is not actually a good way to solve the problem; treatment is hard, and they're extremely likely to feel threatened by anybody who says there's something "wrong". Ultimately, knowing a person with PPD is hard, and will likely take a toll on you.

1. They Read Negativity Into Every Interaction

The key diagnosis of paranoia isn't necessarily that the person believes in conspiracy theories and invests in a tinfoil hat. It's the presence of inherent suspicion about the motives of others, even if it's completely unfounded; and that can express itself in a lot of ways, including taking innocent remarks as threats, interpreting impersonal social interactions as slights, and generally distorting all other people as likely to hurt them. WebMD characterizes their demeanor as "always on guard, believing that others are constantly trying to demean, harm, or threaten them;" and they won't be open to arguments that anything they interpret badly was actually kindly meant.

2. They Are Highly Suspicious Of All Authority Figures

Anything that touches or potentially threatens a person with PPD is a source of malevolence. Their paranoia usually doesn't extend to believing that inanimate objects are "out to get them" (that's a feature of delusions, which don't usually figure in PPD); but if they're dealing with a big organization, like a bank or the government, or people with superiority (like bosses), they're likely to believe, without any justification, that they're working to potentially hurt them and will use their power for ill. This is often the public picture of the paranoid person, but the thing to remember here is that it's usually centered on people and their "suspect or even malevolent" motivations, as Psych Central puts it.

Interpersonal relationships with people with PPD are, understandably, difficult, because a person who can't look at other people without being inclined to believe the worst about their intentions is a fundamentally distrusting partner. The Counseling Directory points out that, as spouses or partners, they're naturally inclined to jealousy, often without any evidence at all, and will constantly want to monitor their loved one or question where they've been. Their distorted world view indicates that, even if somebody insists they're loving and faithful, the possibility of betrayal is extremely real and very likely.

4. They're Secretive And Can Isolate Themselves

This is an unsurprising consequence of the condition that makes their interactions with other people deeply threatening: people with PPD, in the words of the personality disorder organization Out Of The Fog, "have a tendency to isolate themselves and may become hostile to people who threaten this isolation, such as family members, partners and friends." They will withdraw from social interactions, be difficult to draw out of their "shell," and regard all attempts to entertain or cajole them as suspiciously motivated. Expect hostility if they refuse to come out and you try to persuade them.

Don't underestimate the power of the distortion of PPD; even if it makes no sense, they will defend their suspicions to the point of fights. Part of this comes from the possible conditions in which PPD emerges; it can develop in response to what the Counseling Directory calls, with clinical understatement, a "threatening environment" in childhood, in combination with various genetic predispositions. In that context, the paranoia is the only thing that appears "real," and attempts to deconstruct it, however well-meaning, will result in chaos. Out Of The Fog outlines a few ways in which those conversations can go wrong: they might keep getting distracted by anger at their perceived slights by others, deny everything you say, be unable to see themselves as anything except the victim, or be unable to move forward from the argument.

6. They're Hard To Collaborate With

Psych Central outlines this interesting contradiction in PPD sufferers: while you may decide you want them on your team because they "appear to be objective, rational, and unemotional," their disorder means that their responses will actually be deeply divisive when it comes to group work, whether it's a project at work or organizing a birthday party. They'll specialize in "hostile, stubborn and sarcastic expressions," and Psych Central points out that this sort of stuff tends to make other people annoyed, which only confirms to them that other people are out to get them. If you're trying to collaborate with them, you'll likely find most of your energy is being expended on reassuring them (pointlessly) that they're not being threatened and that their position is safe. They display what Psychology Today calls "a strong need for self-sufficiency," and ultimately, getting them to rely on other people will end badly.

7. They Could Hold Grudges For Their Country

The PPD sufferer is not in a condition in which any perceived slights or problems with others are easily let go; instead, they brood on them and will hold suspicions about the person and their motivations for the remainder of their time with them. This obsessive thinking is actually, the organization Mental Help points out, a kind of anxiety: the disorder of the PPD sufferer is constantly fueled by "evidence" that other humans are intensely threatening, and their view of the world as a terrifying place is bolstered by any incident, real or imagined, in which their security was in any way threatened. People with PPD don't understand the concept of forgiving and will persistently bring up this "evidence" as part of their "accurate" world view.

The devastating thing about PPD is that one of its central tenets is the belief that the sufferer's paranoia is correct and that other people are not to be trusted, which makes their seeking help both unlikely and highly difficult to achieve. Building a bond with a therapist or doctor is, as Psychology Today explains, very tricky, particularly if they recommend medication; it's very likely that PPD sufferers will walk out of psychotherapy sessions prematurely. The outlook for a PPD sufferer depends on their own awareness of their issue, and it may be very difficult to keep them in your life if they constantly regard you with distrust and open hostility.

More like this
The UK Abortion Laws In 2022, Explained
By Sophie McEvoy
GIRLI & Q Fell In Love At A Skatepark & Never Looked Back
By Jessica Morgan
5 Ways To Stand In Solidarity With Women In America From The UK
By Sophie McEvoy
How To Fight For Reproductive Rights, Based On How Much Time You Have
By Courtney Young
Get Even More From Bustle — Sign Up For The Newsletter