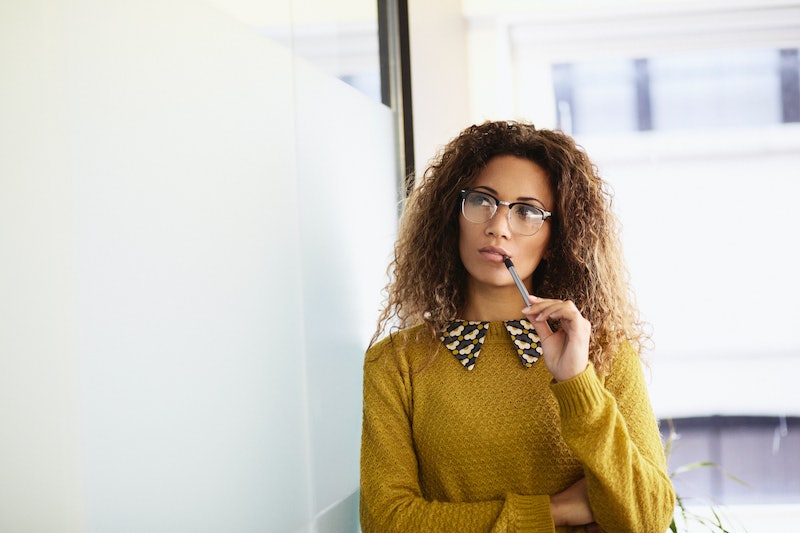 Most of us conceive of ADHD (attention deficit hyperactive disorder) as a child's problem; which makes sense, considering that most media coverage of the disorder focuses on thing like the medication of children, whether schools should classify it as a psychological issue, and the occasional discovery of foods that might spark problems in children suffering from the disorder.

We're still not entirely sure what causes ADHD — genetic and environment factors all seem to play a role, according to Psych Central, with investigations finding that children with ADHD had smaller volumes of "white matter" and thinner tissue in some areas of their brains. But there's something about ADHD that needs to garner more attention: its occurrence in adults. It's estimated that four percent of all American adults have ADHD, which means that the likelihood that you'll know one of these people is pretty high.

Full disclosure: my husband had ADHD as a kid, and still manifests some of the symptoms as an adult, though he's had years of intensive therapy to help him with the disorder. As we'll get into here, having ADHD as a child is often a determining factor for symptoms as an adult, though in some cases it also turns up in adults who had not been previously diagnosed, particularly among women.

Here are some of the signals that an adult in your life might have untreated ADHD, because it goes beyond just restlessness and an inability to concentrate.

1. They Are Easily Distracted

This is the most famous symptom of ADHD, in children or in adults, and it can manifest in many different ways. People with ADHD can find it incredibly difficult to stay put on one task, thought, project or life course; they'll often procrastinate, find it tricky to finish one thing at a time, deviate from plans and organizational strategies, miss deadlines, and/or switch jobs, relationships and situations frequently. WebMD outlines a whole host of areas in which this distraction issue can show itself, from difficulty working on group projects in work situations to serial relationships and marriages.

2. They Have Periods Of Hyperfocus

If you're not familiar with ADHD as a phenomenon, this may come as a surprise to you: though the distraction that sufferers experience gets the big press, the flip side of the disorder is, for many, the experience of radical "tunnel vision," or hyperfocus. In other words, people with ADHD sometimes struggle to focus and find that their attention switches rapidly between subjects, and sometimes experience a level of focus on one single thing that can feel almost too intense.

CNN, in an investigation of the experience of hyperfocus last week, pointed out that this isn't actually out of line with ADHD in general; the disorder, they point out, is a "maldistribution of attention" in which people can "oscillate between splintered and hyperfocused attention," rather than being able to modulate their focus in a normal way. This compete immersion may be, in some ways, rather extreme; Healthline explains that the person may be able to focus for hours on a single thing, to the detriment of what's happening around them.

The Anxiety & Depression Association of America defines lack of organization as one of the key components of an adult ADHD diagnosis, but they don't necessarily mean it in the sense of a messy room or a pile of unsorted shoes. People with adult ADHD are more prone to chronic disorganization crises, like forgetting about meetings or believing they're scheduled on different days, or misplacing important objects. My husband, an academic at Oxford and possibly the least stupid person I know, has twice booked flights to and from the wrong place, and he's had treatment. People with adult ADHD do not do these things because they are dumb; they are just often not focused on the key important details of a situation (like location, time, etc).

As part and parcel of the attention maladjustment of adult ADHD sufferers, they're also more inclined to act impulsively than adults without the disorder. The Royal Society Of Psychiatrists calls this "spur of the moment" thinking, in which ADHD sufferers do things like interrupt conversations or make high-risk choices (speeding, for instance) without a sufficient contemplation of the consequences. Impulsivity alone isn't a guarantee of ADHD, but impulsive decisions matched with poor organizational skills can be a sign that one should talk to a professional about getting a diagnosis.

5. They're "Scattered" (Especially If They're Female)

There's a fascinating gender divide in the experience of ADHD among adults. An investigation by The Atlantic in 2013 found two very interesting things about ADHD among women: one, it takes a different form from male disorders, and two, it may be much more likely to be diagnosed when the sufferer is an adult. According to their research, female sufferers of ADHD are more likely to be "disorganized, scattered, forgetful, and introverted," and it's been proposed that the hormonal fluctuations of puberty may actually increase ADHD symptoms in girls. Boys, meanwhile, often see a quietening of their symptoms as they start puberty.

Gabrielle Moss, who wrote for Bustle about her first diagnosis as an ADHD sufferer at the age of 28, explains that "women's ADHD symptoms often center more around feelings of being overwhelmed and disorganized, rather than the visibly impulsive behavior and hyperactivity that many of us associate with the disorder, which are actually more common symptoms among young men." The tie between estrogen and ADHD appears to be the hormone's connection to neurotransmitters: fluctuations in estrogen, according to Psych Central, impact directly on the body's release of serotonin and dopamine, which both have consequences for concentration and cognition. Menopause is, for those reasons, problematic for women with ADHD too.

6. They Have A Tough Time Dealing With Frustration

Being delayed, bored, frustrated in an attempt to do something or generally thwarted is not a nice experience for anyone; but for sufferers of adult ADHD, it can be extremely hard to deal with. A study in 2011 found that many adult ADHD sufferers have difficulty "regulating their emotions," which essentially means they don't necessarily go through the emotional "censorship" we usually learn as we become adults: they may not know how to talk themselves out of anger, or modulate their voice. People with ADHD often have what the Mayo Clinic calls "low frustration tolerance," or a very easy ability to be annoyed or upset by something going wrong; they may also be impatient and prone to mood swings.

7. They Had Childhood Signs Of ADHD

One of the first things that many medical professionals will do when faced with a possible case of adult ADHD is look through childhood school reports and speak to parents or guardians. There's a good reason for this: for boys in particular, a childhood experience of ADHD may well develop into an adult one. Up to 60 percent of all ADHD cases diagnosed in childhood will go on to become adult ADHD cases, according to a study in 2006. If your friend was disorganized, often distracted, frequently incapable of calming down, and often did things without thinking it through first as a kid, then it's likely that they might have had this for a long time and simply never gotten a proper diagnosis.

So what happens when adult ADHD is diagnosed? Fortunately, there are a lot of treatment routes; and contrary to popular belief, medication isn't the only option. Therapy is highly recommended, as are a healthy lifestyle and diet, and getting enough sleep. Adult ADHD is not an insurmountable problem by any means; but someone who's struggling with these issues might seem some real benefits from treatment.

More like this
15 Ways To Tell Someone Was Just Talking Behind Your Back
By Carolyn Steber
9 Common Phrases Sociopaths Might Use On The People They Love
By Kristine Fellizar
I'm Going Off My Bipolar Meds to Try to Get Pregnant
By Anonymous, as told to Anna Goldfarb
Are Gemini & Scorpio Compatible In A Relationship?
By Kristine Fellizar
Get Even More From Bustle — Sign Up For The Newsletter