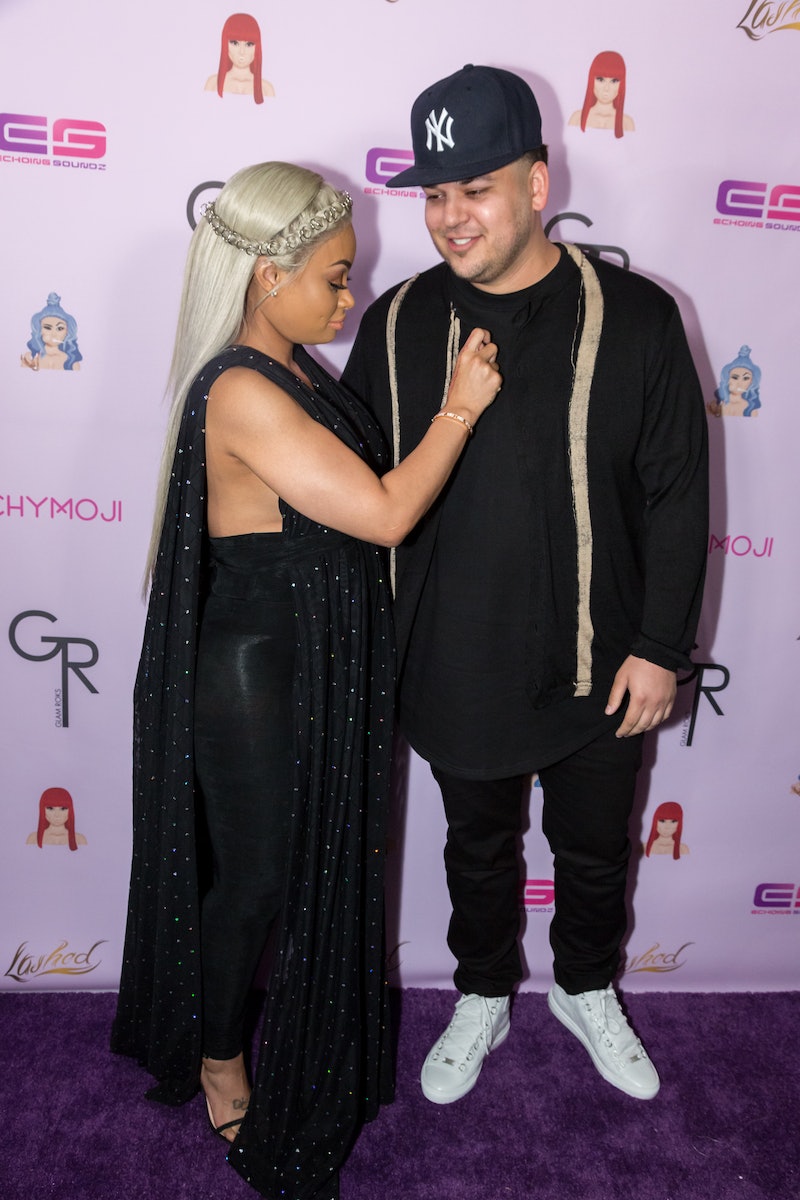 In yet another move in their quest to either eclipse or rejoin the Kardashian family, Robert Kardashian and Blac Chyna appear to have filmed some of their new TV show. An image posted to Instagram on Wednesday night appears to show Robert Kardashian and Blac Chyna on their TV show set — or what looks like their TV show set. The pic, apparently taken from a TV camera, is not the first news about a reality show about the Kardashian family member and his fiancé. Rob and Chyna was announced last month, and the E! reality show will consist of six episodes following the couple's engagement and pregnancy (Chyna is currently pregnant with her and Rob's twins).

The image Rob posted on Wednesday night shows Kardashian and Chyna dressed casually in front of a green screen; could they be filming the talking-head portions also featured on the other reality show Rob starred in, Keeping Up With The Kardashians? If the show documents Chyna's pregnancy, it also makes sense that they would be filming now. News of the reality show was especially dramatic for those who watched Rob hole up and avoid his family's perpetual limelight for the past few seasons on Keeping Up With The Kardashians. While Rob often insisted that it was fame he was avoiding, his pursuit of fame with Blac Chyna at his side makes it seem possible that he was trying to escape his family specifically. Perhaps Rob and Chyna will clear some of that up.

The currently airing 12th season of KUWTK has documented the family's reaction to Rob's new relationship and his attempt at a comeback. The show confirmed what the tabloids had speculated: that the rest of the Kardashians were as surprised by Rob's sudden proposal and pregnancy as the rest of us.

The new image doesn't exactly clear up anything about the upcoming show. Since it's also an E! show, I imagine that it will have a similar format to KUWTK. The rest is a mystery. Will other members of the Kardashian family make an appearance? Will we find out why Rob was so intent on keeping his family out of the loop, and whether Chyna had anything to do with that choice? We don't even know how long we'll have to wait for those questions to be answered. I'm sure the show will air in the next few months; E! wouldn't want to risk us losing interest, but I think we'll be hooked for a while.

More like this
The 1st Photo Of Priyanka & Nick's' Baby Comes After 100 Days In The Hospital
By Jake Viswanath and Hugh McIntyre
Kourtney & Travis Crashed His Daughter’s TikTok Live In Their 2nd Wedding Outfits
By Grace Wehniainen
When Was 'Bling Empire' Season 2 Filmed?
By Alyssa Lapid
Everything To Know About 'RHONJ' Season 13
By Brad Witter
Get Even More From Bustle — Sign Up For The Newsletter