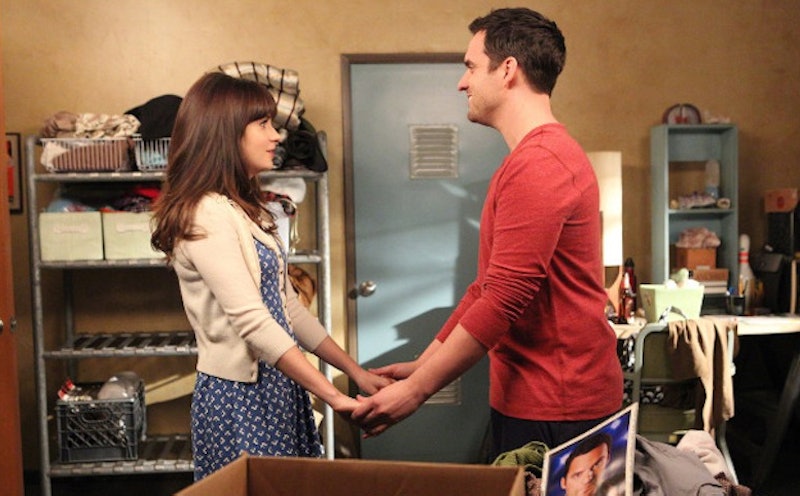 I can't tell if I'm just noticing this now because it's still relatively new to these characters and their storylines, or if it's because I've just been blind — but Nick and Jess' lighthearted anxieties featured in this episode rocketed me back to the early 2000s, when my early adolescent mind was all wrapped around the trials and tribulations (mostly tribulations, some trials) of Monica and Chandler.

Friends is, of course, is the gold standard of sitcoms, and nearly every new 30-minute series is compared to it at least once during its lifetime. So it's only natural that its two main couples — Ross and Rachel on the tumultuous side, Monica and Chandler on the more smooth-sailing, pleasant surprise side — would also be the comparison point for sitcom relationships. Just see Community's Jeff and Britta (established as the off/on Ross and Rachel, then abandoned for lack of chemistry) and The Mindy Project's Mindy and Danny (to be determined).

Nick and Jess, their chemistry recognized almost immediately by the writers, long seemed like the Ross and Rachel: You could tell from that first batch of episodes they'd find a way to dump those characters into bed together or into love with each other, just as much as you could tell that it wouldn't exactly be smooth sailing from thereon out. And so it was — until they'd firmly established themselves in a relationship. Because their dynamic now? It seems more Monica and Chandler than Ross and Rachel — but what does that mean for their future?

Ross and Rachel, like Monica and Chandler, enjoyed a grace period in their relationship, during which they faced normal, loving relationship problems that Nick and Jess have also been working through much of this season. They were also then thrust into a dramatic jealousy storyline (ugh, let us never speak of Mark) that brought out the worst in Ross and led to the "WE WERE ON A BREAAAAK" that embedded itself into pop culture memory forever.

Tuesday's New Girl episode, for contrast, read more like the episode in which Monica and Chandler decide to live together. This entire season, really, has been establishing the ways that Nick and Jess can really genuinely work as a couple despite their differences — Ross and Rachel were always painted as fated, but the writing never backed it up with their dynamic as much as it relied on their chemistry and the assumption that they were fated. Nick and Jess — and Monica and Chandler — for contrast, paint the fated relationship more realistically: New Girl is not afraid to say that relationships take work, and that that work doesn't undermine truly compatible dynamics.

Will Nick and Jess implode by the end of this season? Very possibly. But which Friends pair's conflict will it resemble more? Or will the relationship chart its own course, as the best post-Friends sitcoms do, and surprise us?

And hey, maybe someday I'll write a New Girl react that isn't entirely constructed out of Nick and Jess analysis.