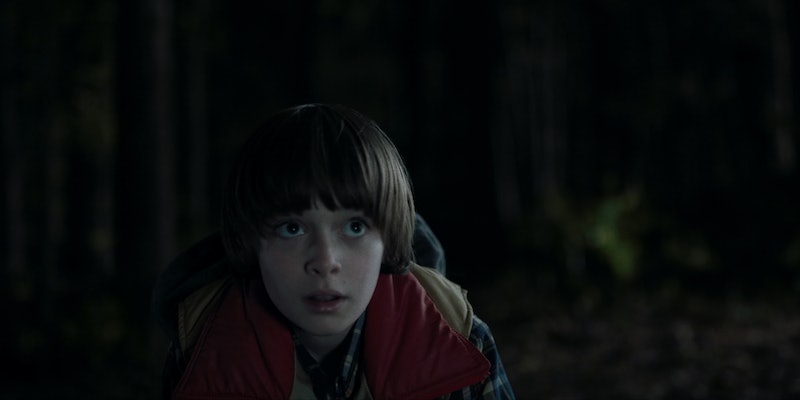 The new Netflix series sets up a classic '80s adventure with four best friends, but the form quickly subverts itself when one of the kids goes missing. Where is Will on Stranger Things ? He appeared to vanish into thin air, which sets up one of many mysteries in the season. Now, be warned, if you actually want to know the answer to this question, there are obviously going to be spoilers ahead for Stranger Things. The further you scroll, the more will be revealed.

While the audience is pretty convinced that Will was taken by a monster, the town thinks that the boy either got kidnapped by a family member, died in an accident, or ran away. Very few people remain hopeful that Will is still alive and out there — primarily his three best friends and his mother, Joyce, played by Winona Ryder. As the series progresses, more and more people go missing. Then teenage Nancy's friend Barb is taken from a pool party. Where did they go?

Is Will underground? Is he in the lights, as Joyce believes? Something is using lights to communicate. Is he in the government facility where Eleven, a mysterious girl who shows up after Will disappears, was being experimented on? Is he in the walls? At one point, his body is apparently found. The town holds a funeral and everything. However, Joyce is unconvinced and Chief Hopper discovers that Will's body is a creepily taxidermied fake. Gross. Back to the drawing board...

Towards the middle of the series, the presiding theory is that he is in an alternative dimension that Eleven calls "The Upside Down." This coincides with what Will tells his mother about being trapped in a place that looks like home but is somehow wrong. He's on Earth-2, basically, but it's not fun like The Flash. At the end of Episode 5, Nancy herself is taken, and in Episode 6 she and Jonathan appear to be trapped in a parallel universe type of situation. While he does return home at the end of the season, who knows what a possible Season 2 will reveal about Will and where he ended up?