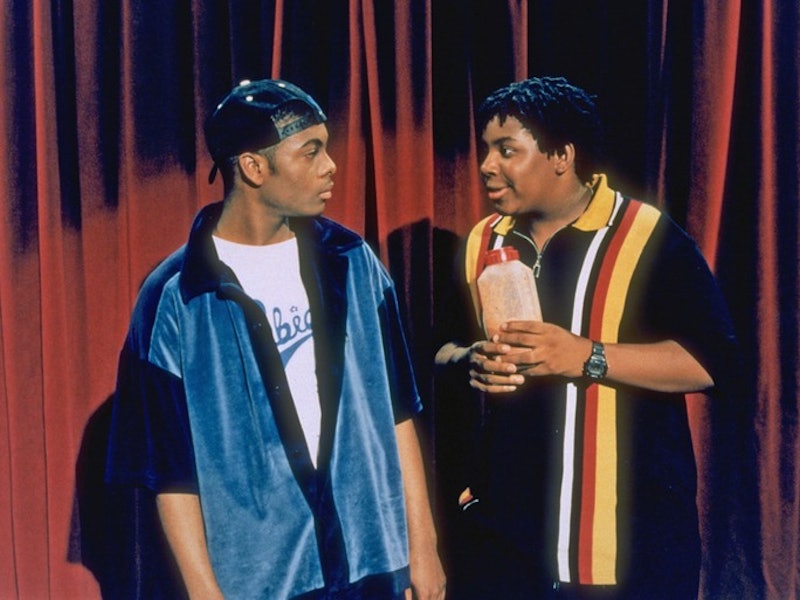 You knew it, I knew it, we all knew it: that practically tangible friendship chemistry shared by the onscreen characters of Kenan and Kel wasn't just faked for the cameras. Kenan and Kel were real friends in life as well as on the show and now we know for sure, thanks to an in-depth interview with the pair Entertainment Weekly conducted to celebrate the show's 20th anniversary.

The pair attributes their backgrounds and their shared style of comedy to why they immediately clicked when working on their first project together, the sketch show All That. Kenan Thompson told Entertainment Weekly,

I think we just had very similar experiences in life, like he happened to be from Chicago and I’m from Atlanta, but most black families are pretty much the same, like very close and very fearful of our five-foot mothers and sh*t like that. We both have very similar taste in comedy even though his is more physical and mine is a little more standing around-ish.

He also expands upon how the pair built a relationship on set with their taste for improvisation, explaining “Kel and I did Mavis and Clavis together where we were ad-libbing back and forth and sort of clicked and made each other laugh. It all happened pretty much the first day because that was when we were like, ‘Oh, we’re the same dude.’”

If you're wondering how and if this can get any cuter, you're in luck. It does, because obviously. No pair with this much on-screen chemistry can have really been feigning it. It was Kenan and Kel's obvious friendship that led to them landing Kenan & Kel. You heard me: without them being pals, there would probably never have been a show. Kel Mitchell explains “During the seasons of All That they used to see Kenan and I off-set, just kind of telling jokes and hanging out — that is basically what led to the Kenan & Kel show.”

While I didn't know this already, I have to say it isn't terribly surprising. Kenan & Kel may have had elaborate plot arcs — Kenan's family wanting to go on a road trip without Kel, Kel finding a screw in his tuna sandwich, Kenan trying to live life like Ernest Hemingway — but nobody tuned in purely for the drama. The real key to the popularity of the show was how much fun the two leads seemed to have around each other. They had fun, so we had fun watching.

The opening to the video above showcases that perfectly. Sure, Kenan grows annoyed with Kel messing up the cameras with peanut butter, but it's his mixture of irritation and affection that you only get around friends you've known forever and feel totally at home with. And that's key to the show. Kenan Thompson and Kel Mitchell might not have known each other that long before they started shooting, but they clicked so well that they had a best friend dynamic and that's why we all tuned in to watch them.

So make sure you celebrate the timeless Nickolodeon show's anniversary in the only fitting way: phoning up your BFF, inviting them round for orange soda and a Kenan & Kel marathon.