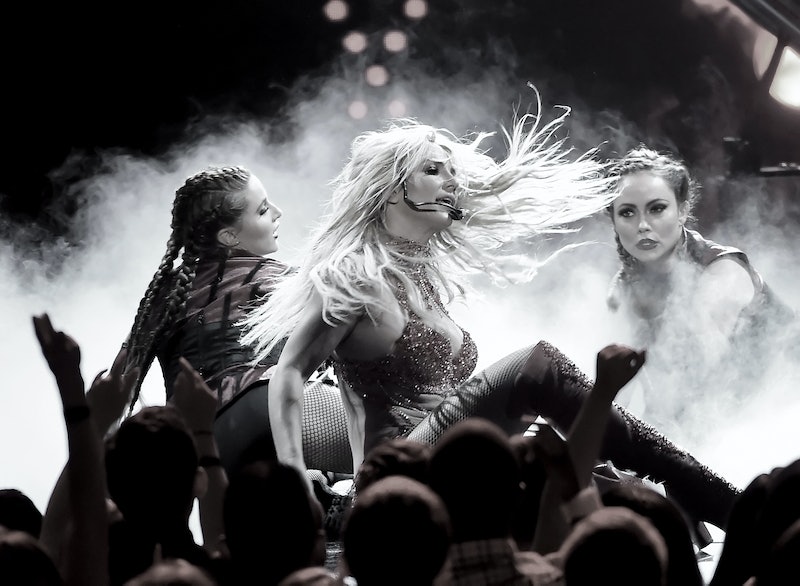 What a year for female led pop. Beyoncé and Rihanna have been dropping hits right left and center, so no wonder Ms. Britney Spears wanted to get in on the action, in an infectious, shimmering summer song that she dropped on Friday. But what do Britney Spears' "Make Me" lyrics mean? To me, the song works as a catchy paen to obsessive romantic love, which is interesting timing since Britney Spears broke up with Charlie Ebersol in June (probably as part of the summer of celeb breakups, which is totally a thing, guys). Could we infer there's a new leading man on the scene? Maybe, maybe not. I'm not sure it matters. It manages to be both chill and danceable all at once, and that's really all we need right now.

The single, which features rapper G-Eazy, isn't the only work Spears has debuted recently. She also featured parts of another new song, "Private Show" in a commercial for her new fragrance, which shares its name with the song. But what is Spears telling us with her first single since "Pretty Girls," the song she collaborated on with Iggy Azalea last summer? Let's check it out — you can preview/buy the song here.

Friday, I'm dreaming a mile a minute 'bout somebodyThis feeling, I wanna go with it, cause there's no wayWe're hiding away from this tonight, oh, this tonightCan tell you want meBy the way I see you starin' 'cross the room, babeNo shame in the gameJust cut the shit, be honestYeah, you know what you gotta do tonight, do tonight

Britney Spears is a grown woman and don't you forget it. This isn't 16-year-old Britney singing about having a crush and doodling some boy's name surrounded by hearts in her school notepad. She wants things to get physical, physical.

From the bar to the car, let's take it back to my room

Igniting the heat of the moment; let the sparks fuse

Blowing up to the ceiling, we're burning bright

When we cross the line

Do you ever feel like maybe famous people have a better time in bed than us Muggles? Proof. Also while "bar" and "car" have a nice rhyme scheme, I'm hoping this means one of the couple has been sipping lemonades the whole night, because you should never drink and drive, not even for crazy-amazing-flame-igniting lovemaking. Fact.

Cause you're the flame I can't do withoutThe fire comes in the sapphire sunThere's no way I'm gonna be fighting this tonight, this tonight

Ooh. This love/lust sounds as hot as summer itself. Britney's totally channeling that Game of Thrones moment where Cersei's like "I do what feels good." And honestly, given how hard Britney works, I feel like she could use some time to let loose.

OK. You get the drill by now. They're in some sort of saucy loved up beginning of a partnership and they're into each other both physically, mentally and... climactically? So. Much. Fire.

I don't care if it's a random person or the biggest starOut in Vegas or little barsReally not a difference if it's near or farListen, here we are; need youI've always wondered what was off limitsStaring at you til I'm caught in thisBack and forth like this was all tennisI'm all jealous, you came with someoneBut we could tell that there's changes comingSee I could tell that you're a dangerous womanThat means you're speaking my language, come onNow follow me, let's goLike Penelope in "Blow"Well worth the stealing you, it's a felony, yeah I knowThat's why they keep on telling me to let go, yeah