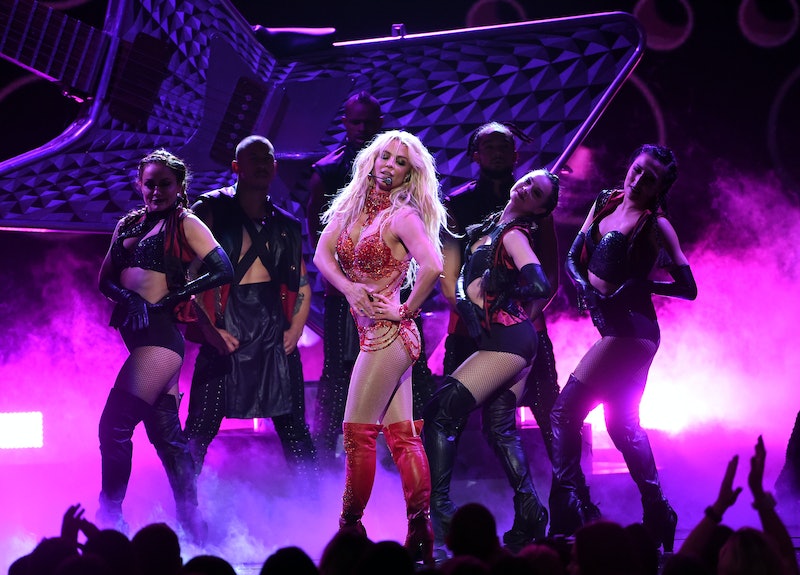 To the delight of my Britney Spears Halloween costume-wearing 8-year-old self, and to fellow longtime Britney lovers everywhere, Spears just released a new song featuring G-Eazy called "Make Me." As with most tunes churned out by the mega star, it's a sure-to-be classic. The song is upbeat yet soothingly subdued, fun, and gives off an earlier-Britney vibe, which I can totally appreciate. Also, it's real summer song being that I can picture myself listening to it on a beach somewhere, cool, calm, and collected with an especially delicious cocktail in hand. But, what is Spears' new song actually about? Well, let's take a closer look at the lyrics.

Rather than ask who the song is about, which I usually do when it comes to lyrics because hello, pop culture buff here, this Spears' song doesn't give me the vibe that it is especially personal. It's more indicative of a universal mood and a feeling you have when you're out at a bar or a club and spot someone you're particularly, uh, feeling at the moment.

More specifically, the first verse goes a little something like this,

Friday, I'm dreaming a mile a minute 'bout somebodyThis feeling, I wanna go with it, 'cause there's no wayWe're hiding away from this tonight, oh, this tonightCan tell you want meBy the way I see you starin' 'cross the room, babeNo shame in the game/Just cut the sh*t, be honestYeah, you know what you gotta do tonight, do tonight

See what I mean? Who hasn't seen someone from "across the room" and wondered how to talk to them or get their attention? That's right, basically no one. This is something we can all relate to, making me think that Spears isn't singing about someone in particular. In fact, the song could be about anyone.

Our girl B. Spears doesn't just leave things at the flirtatious encounter, though. This song takes a sultry turn, and it's clear that the song hones in on the notion of living in the moment and giving in to your more baser urges. Case in point, in the verse below, things get just little bit bolder than the one we looked at before.

No rulesFrom the bar to the car, let's take it back to my roomIgniting the heat of the moment; let the sparks fuseBlowing up to the ceiling, we're burning brightWhen we cross the line

Other lyrics of importance to further help us all understand what the song's main point is? I think this verse is pretty self-explanatory:

This song is about not love, but chemistry at first sight. It's about crushing on someone, dancing with them, and seeing where the night goes from there. It's not an especially serious tune, but it doesn't need to be. It's exactly the kind of lighthearted song that the summer requires. It's a jam.