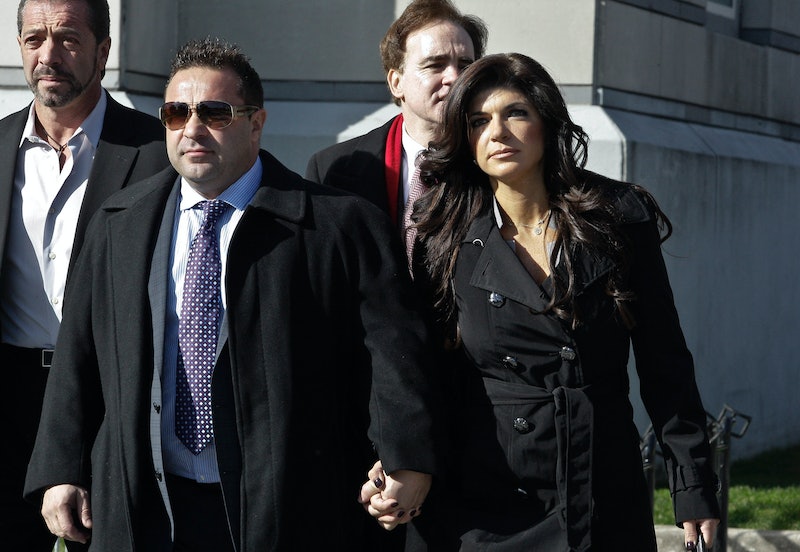 After pleading guilty to multiple counts of fraud on Tuesday — bankruptcy fraud, tax evasion, and conspiracy to conduct wire and mail fraud — it is now being reported that Teresa and Joe Giudice will still appear on the Real Housewives of New Jersey season 6. According to TMZ, the show will "exploit the legal woes" of the Giudices. The website claims that filming will have wrapped by the time the Giudices are sentenced on July 8. They go on to say that the only issue would be the reunion show which is filmed last, because the Giudice's may have started jail time by that point. Obviously (well, hopefully it's obvious), the Giudices' legal issues are far more important than Real Housewives, so instead of appearing on the show the Giudices should be scrambling to find a way out of their contracts. Unfortunately for them, their legal drama is exactly what the show would want, so there's probably a clause specifically stating that all legal problems are fair game.

Teresa might be okay with the her issues being filmed because she sure hasn't taken herself out of the public eye following her trial. She's still been active on social media and has been retweeting messages of support from fans. She also took a moment to congratulate Nene Leakes on being cast on Dancing with the Stars.

But what do the other women of RHONJ think of the Giudices guilty plea? Well, most of them seem to be going along with their business as usual. In Jacqueline Laurita's case this means literally promoting her business. Laurita has a mineral water business called Blk Water becasue all Real Housewives stars have extremely random business ventures. She did post a tweet, and some inspirational words from Demi Lovato, that seemed to go out to the Giudices.

Dina Manzo, who is returning to the show for its sixth season, also tweeted a supportive message.

Caroline Manzo, who is leaving the show, didn't have anything to say to the couple, at least on social media, and just wrote about playing tennis in the sun. Kathy Wakile followed suit and continued to promote an event she's hosting with her husband with no comment to Teresa or Joe.

There is not yet a premiere date for season six of RHONJ, but you can bet that the women will have plenty to say about Teresa Giudice behind her back and in the interview shots. Giudice just might not be able to defend herself come reunion time.