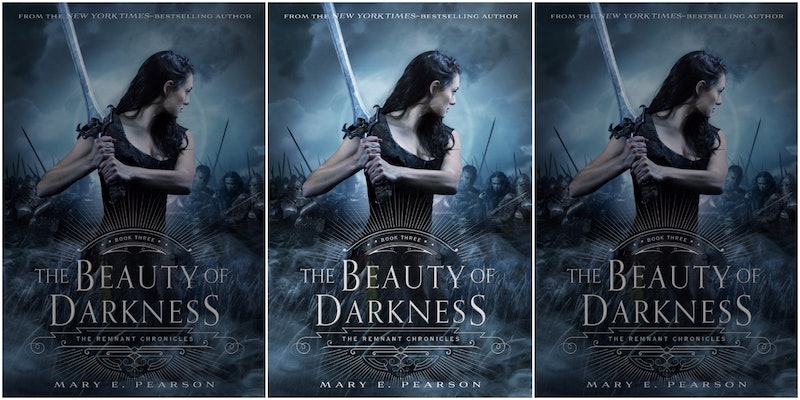 This summer, Mary E. Pearson's beloved The Remnant Chronicles series will come to a stunning conclusion with the release of the third and final installment, The Beauty of Darkness , available from Henry Holt and Co. on August 2.

The Remnant Chronicles began in The Kiss of Deception when Lia — a princess who is supposed to have a mysterious gift, but doesn't — flees to a distant village to avoid marrying a prince from another kingdom. Just as she begins to settle into her new life, two strange men appear: one is Rafe, the prince she left behind, and the other is Kaden, an assassin sent to kill her. Her journey only begins there, and the adventures of Lia, Rafe, and Kaden continue in book two, The Heart of Betrayal. Now, readers will finally learn how it all ends for Lia with the release of The Beauty of Darkness.

We are proud to present an exclusive excerpt of chapter six of The Beauty of Darkness. Author Mary E. Pearson tells Bustle this is a "pivotal chapter for Rafe."

Chapter six is a short chapter from Rafe’s point of view, and it is pivotal chapter for Rafe. Lia, Rafe, and his crew of four have escaped and are hiding out in cave when Lia senses they are in danger and says they must leave the cave immediately. Rafe has extensive training as a soldier. He has extremely skilled men at his side, not to mention he has previously argued for staying put in favor of healing. His training tells him one thing, but now Lia appears half-crazed and is demanding another.

And then he realizes it is the gift speaking to her. This doesn’t reassure him. Just what is the gift? He isn’t sure. Rafe lives in a concrete world of strategies, weapons, the seeable, and knowable. He is a soldier and his skills have served him well. But Lia has a strength that is different from his own—one that he isn’t familiar with. Can he trust this gift of hers? Should he? His men are watching him, waiting for his answer. He is in command and their lives are his responsibility too. Trust Lia’s gut, or trust his skills as a soldier?

Ultimately, he takes a gamble, uncertain if he has even made the right decision. It highlights how far he and Lia have come, but also how far they still have to go. This won’t be the last time that Lia’s gift is questioned.

The Beauty of Darkness will be available everywhere books are sold on August 2. Read chapter six below, and pre-order your copy now!

We startled awake, alarmed by her shouting, jumping to our feet, drawing swords, looking for imminent danger.

Jeb was saying it was a false alarm, that there was nothing wrong, but Lia had somehow gotten to her feet on her own, her eyes wild, telling us we had to leave. A relieved breath hissed between my teeth and I lowered my sword. She’d only had a nightmare. I stepped toward her. “Lia, it was just a bad dream. Let me help you lie back down.”

She hobbled backward, determined, sweat glistening on her face, and her arm stretched out to keep me at a distance. “No! Get ready. We leave this morning.”

She looked from me to my men. Their feet were firmly planted. They weren’t going anywhere based on her wild-eyed demands. Had she spiked another fever?

Her expression sobered. “Please, Rafe, you have to trust me on this.”

That was when I knew what she was saying. She was speaking of the gift, but I still hesitated. I had little knowledge of it and less understanding. Which could I trust more: my experience and training as a soldier or a gift that even she couldn’t fully explain to me?

“It’s not what I saw but what I heard— Aster’s voice telling me not to tarry.”

“Didn’t she say that to you a dozen times?”

“At least,” she answered, but her stance remained determined.

All this rush over don’t tarry?

Ever since I had gathered her into my arms on that riverbank, I had been looking over my shoulder for danger. I knew it was there. But I had to weigh that uncertainty against the benefits of healing too.

I looked away, trying to think. I wasn’t sure if I was making the right decision or not, but I turned back to my men. “Pack up.”