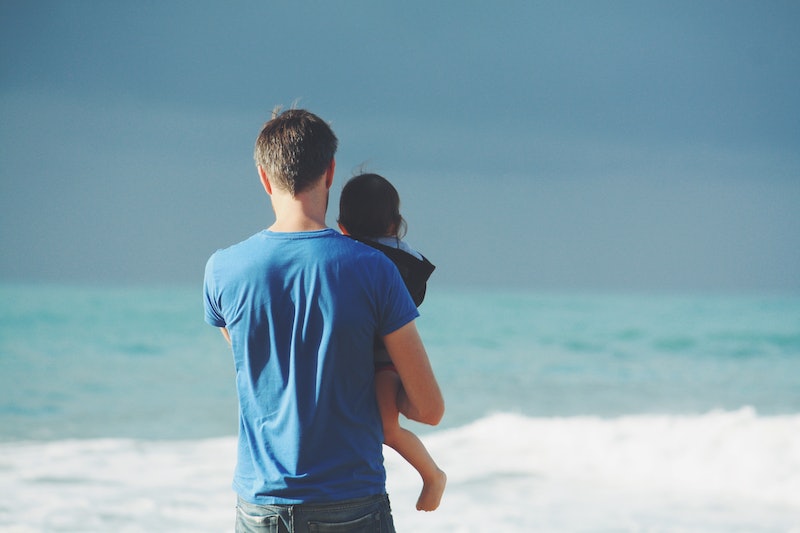 Despite the fact that society seems to think men are superfluous when it comes to the duties involved in raising children, science thinks something else. According to two new studies, dads play an important role in child development — which means we should really stop treating "parenting" as synonymous with "mothering." Mothers are of course important, but for families with heterosexual parents, they're only half of the parenting equation.

In a pair of studies conducted at Michigan State University, one published in the journal Early Childhood Research Quarterly and the other in Infant and Child Development , researchers looked at the effect that parental mental health and stress levels had on child development. They also made the very important decision to focus not only on women, but on men as well.

"Despite numerous studies on parenting stress suggesting negative influences on parent–child interactions and children's development," the authors write in one study, "the majority of these studies focus on mothers' parenting stress with little or no acknowledgement of fathers." So they decided to correct that.

And, lo and behold, it turns out that fathers have a big impact on their kids. In fact, fathers being stressed out or suffering from mental health difficulties like depression affected children in the same way that previous studies have shown a mother's stress or mental health status to affect children; namely it has a big impact on things like language and cognitive development, social skills, and behavior problems. As such, it logically follows that father's are just as important for a child's healthy development as mothers are.

And lest you think this is simply a matter of boys needing a father figure or a male role model, researchers also found that "there were no gender differences in the effects of fathers' parenting stress on children's cognitive outcomes" and that fathers' mental health similarly impacted all children, regardless of gender. (Though they did find that boys' language development was slightly more influenced than girls'.)

Overall, it seems evident that dads aren't bumbling extras when it comes to raising children, despite what a huge variety of harmful stereotypes might insist upon; rather, they're vital.

Neither is this the first time that science has shown dads have a major impact on their children. There's lots of evidence for the many ways that men also impact their kids — all of which has big implications for the way we treat parenthood in our society.

For men, this societal attitude about parenting can make men feel as though they shouldn't take an active role in their children's lives, or as though they wouldn't be any good at it if they tried to. Dads in our culture are portrayed as though they are supposed to be aloof, caring but not involved — and as though any effort dads make to be involved is at best cute and at worst hilariously doomed to failure, all of which seems designed to deprive fathers of the meaningful experience of parenthood.

For women, the social pressure to have children and to be solely responsible for them has historically meant women face a lot of resistance to the idea that they should do anything else with their lives — like, say, have a career. Women also are under intense pressure to be "perfect" as mothers because they're treated as though they're the only ones truly responsible for their kids. And indeed, when children go wrong, "blame the mother" is a common default attitude.

Obviously, neither of these social models is ideal. No one should be cut out of their role as a parent based on their gender, just as no one should have that role consume their entire identity. And it really can't be good for kids either — especially since these stereotypes and sexist attitudes appear to be influencing research around childhood development, probably skewing our understanding of it.

“There’s this whole idea that grew out of past research that dads really don’t have direct effects on their kids, that they just kind of create the tone for the household and that moms are the ones who affect their children’s development,” Claire Vallotton, the primary investigator on the research project, said in a statement. “But here we show that fathers really do have a direct effect on kids, both in the short term and long term.”

And understanding that could be key to raising emotionally healthy kids. Not to mention having parents who aren't stressed by the bombardment of harmful societal messages.

More like this
25 Inspiring Quotes From Black Women To Celebrate Black History Month
By Kyli Rodriguez-Cayro and JR Thorpe
24 History-Making Black Women You Probably Didn't Learn About In School
By Ayana Lage and JR Thorpe
Twitter Is Identifying With Sally Field & Jane Fonda’s Friendship In New Viral Video
By Jake Viswanath
21 Galentine’s Day Memes To Celebrate Your Best Friends
By Meghan Bassett and Mia Mercado
Get Even More From Bustle — Sign Up For The Newsletter
From hair trends to relationship advice, our daily newsletter has everything you need to sound like a person who’s on TikTok, even if you aren’t.