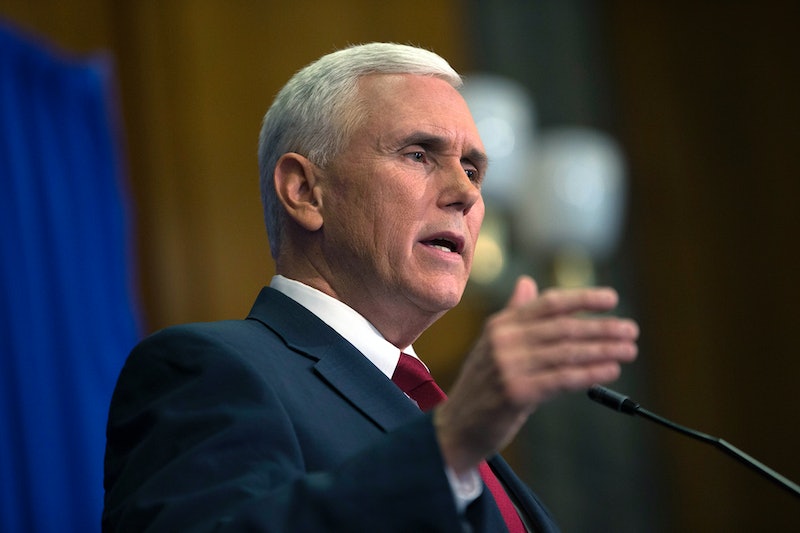 On Friday morning, presumptive GOP nominee Donald Trump confirmed reports that Indiana Gov. Mike Pence would be his running mate in the 2016 Presidential election. Trump was scheduled to announce the decision on Friday morning at a press conference in Manhattan but delayed the event due to the attacks in Nice on Thursday. But now that the Indiana governor has been confirmed as Trump's running mate, it's important to look at Pence's record on issues that are important to the American people, notably Pence's stance on gay marriage.

Pence has been at the center of a number of controversial bills in Indiana, which have often targeted and discriminated against the LGBTQ community. In 2015, he voted in favor of a Religious Freedom Restoration Act (RFRA) that would give businesses the right to refuse service to individuals based on their sexuality, giving businesses religious rights. Pence has also been far from progressive on same-sex marriage, favoring a ban on the practice for reasons that can only be chalked up to his strong "Christian faith."

If we look even further back at his record on gay marriage, in 2004, Pence voted in favor of and also co-sponsored a constitutional amendment to ban gay marriage altogether, and in 2006, he voted in favor of defining marriage as a union between one man and one woman. Pence also fought to block the legalization of gay marriage in Indiana in 2014 when U.S. District Judge Richard Young ruled that the state's ban on same-sex marriage was unconstitutional, according to the IndyStar. In an interview with MSNBC's Chuck Todd, Pence argued, "In the state of Indiana, marriage is recognized as between a man and a woman, and I think that’s how it should remain."

Pence has certainly not been an active member in forwarding LGBTQ rights. He has not been a proponent of same-sex marriage over the course of his political career, and in the case of a Trump presidency, it's fair to assume that neither Trump nor Pence will be forward-thinking on social issues.

More like this
What The UK Blocking Scotland’s Gender Recognition Bill Means
By Sam Ramsden
Gen Z Are Twice As Likely To Identify As Queer, According To New Data
By Sam Ramsden
The UK Government Is *Finally* Banning Conversion Therapy
By Sophie McEvoy
8 Charities To Donate To During Black History Month
By Alexis Morillo
Get Even More From Bustle — Sign Up For The Newsletter
From hair trends to relationship advice, our daily newsletter has everything you need to sound like a person who’s on TikTok, even if you aren’t.