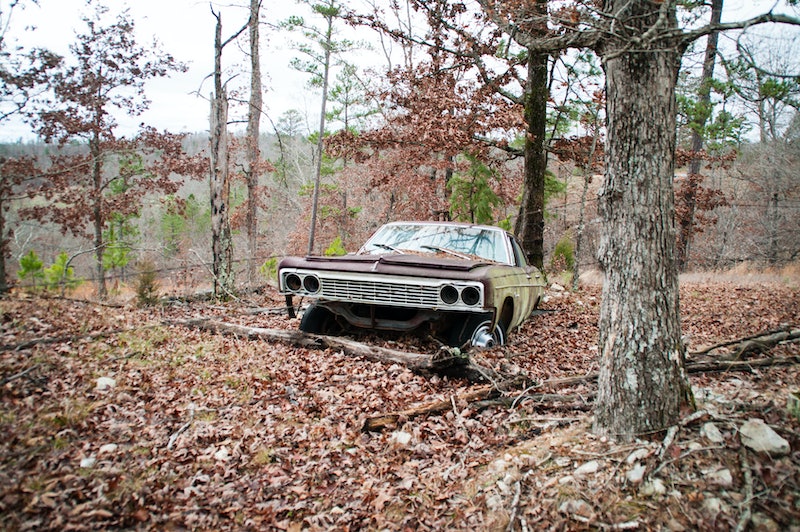 Let's not beat around the bush — if you're reading this article, you know it doesn't have to be Halloween for you to enjoy creepy urban legends. The eternal sunshine and brightly colored fashions of summer may not provide the most thrilling atmosphere (it's hard to shiver at House of Leaves when it's 105 degrees outside), but if you're a true connoisseur of creepiness, you're perfectly capable of scaring your own pants off even by the pool.

The only snag is finding new material. You might love that tingle down your spine year round, but most people’s interest in creepypastas and the unusual tends to wane outside of October. Fortunately, that’s where Reddit comes in — if it's something you're into, the website remains one of the best ways to keep up with strange or paranormal stories. Every few weeks, no matter what time of year, someone creates a new Ask Reddit thread asking people to recount their weirdest, creepiest, most inexplicable experiences, and each time, their fellow users deliver in spades. Earlier this week, Reddit user hemehime focused the discussion on contemporary folklore. “What urban legend legitimately gives you the creeps?” he wrote on Monday.

The thread was soon flooded with comments. Some pointed to modern classics like the Russian Sleep Experiment, while others recounted less well-known legends local to their area. Be sure to check out the page for yourself tonight, but in the meantime, I've collected eight of the most unsettling stories below.

Kuchisake-onna, aka the "slit-mouthed woman," is a popular figure in Japanese folklore and on creepypasta websites — let's hope you don't come across her anywhere else.

Unlike the other stories on this list, skinwalkers and wendigos aren't urban legends so much as actual legends, but that doesn't make them any less unsettling. According to Navajo folklore, skinwalkers are humans who have acquired the ability to transform into an animal (usually a coyote, owl, wolf, fox, or crow) at will. They might not kill you, but they can certainly stalk or curse you. The worst part? Legend dictates that skinwalkers can only gain their ability by murdering a family member.

The Wendigo legend deals with the same theme of human transformation, but they're a little scarier. According to Anishinaabe mythology, the Wendigo are tall, monstrous beings with an insatiable (and very literal) hunger for humans. This transformation is brought about by cannibalism; even if it was to survive, consuming another human leaves someone vulnerable to possession by the evil spirits that turn them into a Wendigo.

3. Plumbing Problems Can Get Much Worse

This urban legend has been around for as long as people have had indoor plumbing, but every once in a while, it actually comes true. The last occurrence was in 2013, when a snake emerged from a toilet and bit an Israeli man's nether regions. Yikes.

Like many successful urban legends, the Bethnal Green Screams story has its roots in fact. In the greatest civilian disaster of World War II, 173 people were crushed to death while taking shelter in Bethnal Green tube station during a bomb raid. Although the "screams of the dying" bit is debatable, the tragedy alone is terrifying enough.

The author of the post goes on to explain that according to local folklore (or at least his mom), the head is "still rolling around the mountains of West Virginialooking for victims." Nope nope nope.

Although anecdotal evidence of this legend abounds online, it's far less common than the Internet makes it sound. In fact, it's probably not true, but that doesn't make the idea any less creepy.

The worst part about this one is that it's not unheard-of; in 2008, a Japanese man discovered that a woman had been living in his cupboard for an entire year.

8. Gateway Of The Mind

This particular creepypasta isn't the scare-your-pants-off type, but it's certainly disturbing. The story goes like this: A team of scientists hypothesized that if someone were deprived of their sense long enough, they could establish communication with a higher being. They found a volunteer, operated to cut off his brain's sensory awareness, and left him alone with his thoughts.

More like this
21 Absolutely Adorable Christmas Gifts For Dogs
By Carolyn Steber
What Does “The Rizz” Mean On TikTok? The Viral Slang Term, Explained
By Alexis Morillo
The 10 Memes That Defined 2022
By Alexis Morillo
This AI Filter Shows How You’d Look In Different Time Periods
By Alexis Morillo
Get Even More From Bustle — Sign Up For The Newsletter