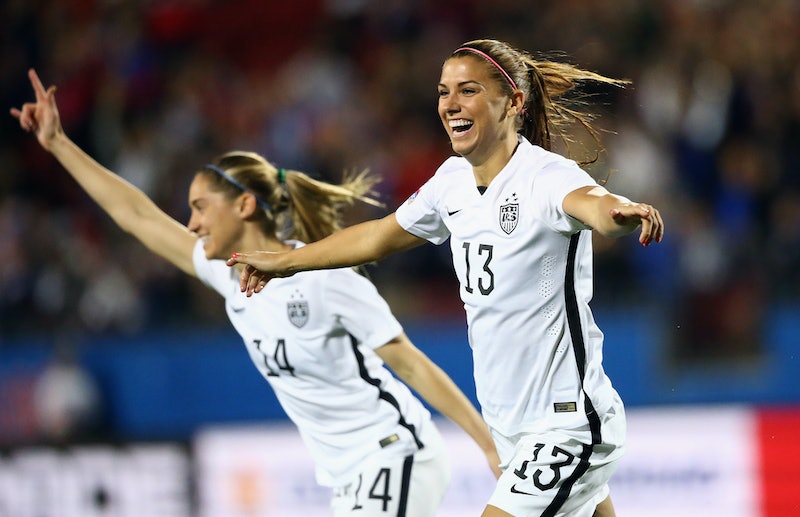 The 2016 Rio Olympics are coming up soon, and for anyone who loves behind-the-scenes looks at training sessions or life in the Village, what better way to check in than to follow all your favorite athletes on Snapchat? There are plenty to follow, but with the most recent release of the full U.S. Women's National Soccer team roster, one Snapchat account I'm looking for is Alex Morgan's, soccer superstar, two-time Olympian, gold medalist, and World Champion. So, will I find Alex Morgan on Snapchat?

Despite being very active on both her Twitter and Instagram accounts, Morgan's Snapchat account name is nowhere to be found. Whether she doesn't have one or it's private, the only way to see into the life of #13 is through her tweets and 'grams. But that doesn't mean you won't see Morgan on the app at all! Along with Facebook, Twitter, and Instagram accounts, the U.S. Women's Team has its very own Snapchat account that you can follow with the username "ussoccer_wnt." On the account, players take turns controlling the eyes and ears of the world's best women's soccer team, taking pictures and videos of pre-training sessions, locker room hangouts, or time with their head coach, Jill Ellis.

Every account is extremely active, keeping fans in the loop at all times about where they're playing next, who they're playing, and what the Olympics are going to be like this year. Her accounts are also very politically charged, with Morgan often tweeting about current world issues surrounding race, gender inequality, gun violence, LGBTQ rights, and more, taking a stand as not just an athlete but a public figure with an important voice.

The U.S. Women's National team, along with Morgan, have also been fighting a specific fight for equal pay for women. Even with its many more successes than the Men's National Soccer team, the women's team claims they are paid 25 percent less than the men's, which has sparked national defense filings and tension between the team and the U.S. Soccer Federation, which disputed the team's claim, according to The Huffington Post.

But even while championing fights against injustices to women everywhere, the women's team and Morgan continue to be inspirations to young women across the country and around the world. Following Morgan on Twitter and Instagram can help you be a part of the bigger picture and look into her exciting life, while following the Women's National Soccer team on Facebook, Twitter, Instagram, and Snapchat can show you the team spirit, on and off the field, that Morgan and her teammates share leading up to this year's Rio Olympics.