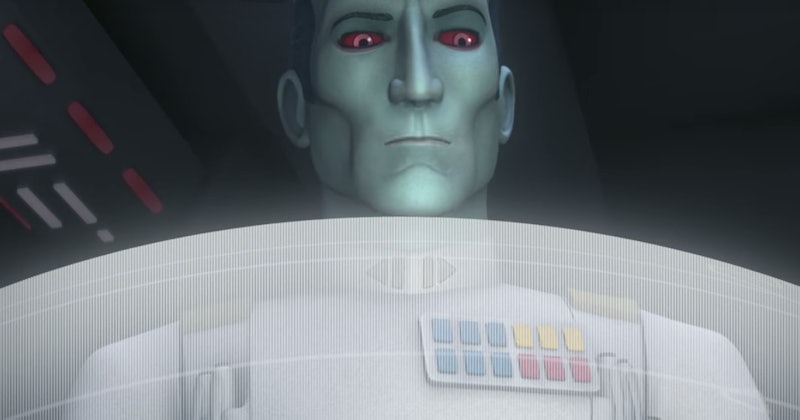 A curious thing happened when the Star Wars Rebels Season 3 trailer played at Star Wars Celebration 2016 in London on Saturday... OK, so maybe not all that curious, but perhaps a bit perplexing to anyone who's never managed to cycle through the Star Wars books. Rebels introduced a new villain that drove much of the crowd into a frenzy, but for those of you wondering just who this Admiral Thrawn is and why everyone was so thrilled, I've got your back.

Grand Admiral Thrawn first appeared in the series of books that are, well, kind of his realm: Timothy Zahn's Thrawn Trilogy, starting with best-seller Heir Of The Empire (cover below). Since then, he's been all over the expanded universe. So what might one be capable of that might merit having an entire Star Wars book series named after you and keep coming back for more?

For one, as the Rebels trailer betrays, he's got an eye for precision when it comes to leadership. He's also so confident in that ability that he's sure he can make the rebels become their own worst enemies in Season 3 of the cartoon series. He is not human — the blue skin and red eyes are the mark of the Chiss, another humanoid species — but the most important thing to know about him is the guy is absolutely ruthless when it comes to achieving his goals.

More like this
A New 'And Just Like That' Table Read Pic Confirms A Key Character's Return
By Jack Irvin and Grace Wehniainen
Everything To Know About The 'Daisy Jones & The Six' TV Series
By Maxine Harrison and Brad Witter
The Song At The End Of 'The Last Of Us' Ep 1 Has A Deeper Meaning
By Sophie McEvoy
'Mayfair Witches' Already Changed 2 Major Characters From The Books
By Grace Wehniainen
Get Even More From Bustle — Sign Up For The Newsletter
From hair trends to relationship advice, our daily newsletter has everything you need to sound like a person who’s on TikTok, even if you aren’t.