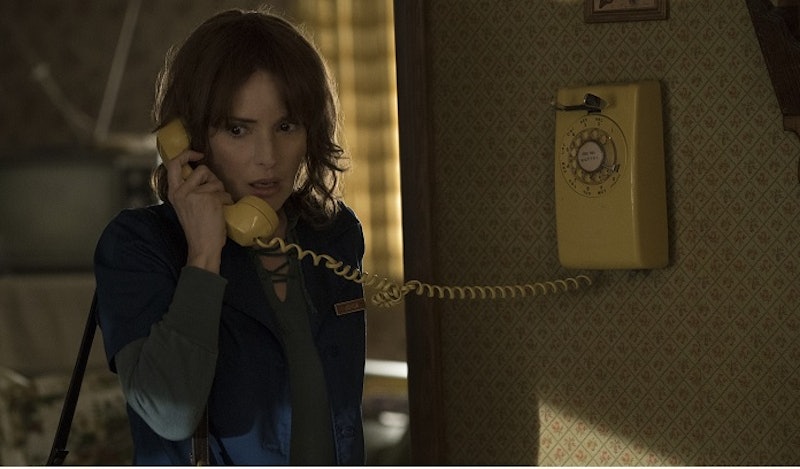 It's no secret that we're all loving Netflix's Stranger Things , the atmospheric '80s throwback series that is currently streaming on Netflix. The series is set in the heart of the early '80s, where kids play Dungeons & Dragons, bikes are the biggest mode of transportation, and listening to the latest bands meant popping The Clash or Toto onto your turntable. The most noticeable quality Stranger Things possesses is that it is so stylish, not only in it's look but in the references it makes to the nostalgic films of yesteryear. With thematic references to Steven Spielberg and Stephen King scattered throughout, this amazing series keeps you on the edge of your seat while you try and unravel the mystery of Will Byers and the town of Hawkins, Indiana. Just what exactly is so strange? That's precisely the question that needs answering.

While I was marathoning this series, I began thinking about other horror and sci-fi films that would pair neatly with this series. If there's one thing I think we can all agree to, it's marathoning on another TV series or group of movies once we've finished a marathon sesh. Right? So, in celebration of Stranger Things, here are the films that I think would best keep the good vibes going.

Downton Abbey's Dan Stevens plays a soldier returning home from a tour of duty and bearing some bad news for a fellow soldier's family. When his behavior gets shady, questions are asked... and the results are gruesome. Scored with a super '80s electronic soundtrack and featuring some great cinematography, The Guest is brilliant.

This classic is one of the most definitive horror films in history, and it also provides serious atmosphere. Pored over by cinephiles and newcomers alike, this film stands as a testament to what horror can do to the viewer, psychologically and emotionally.

Another contemporary horror film which heavily hearkens back to horror films of the '80s and '90s is It Follows. Just like the insidious monsters and unseen forces in Stranger Things, this film is full to the brim with eerie, otherworldly horrors.

A horror anthology par excellence, V/H/S is comprises of five stylishly shot VHS tapes, woven together to present different narratives that will truly terrify. Go watch this one ASAP.

Watching Nightmare is a veritable rite of passage. Monsters that creep around at night start here, in this seminal horror film. Just don't fall asleep while you watch.

Oh Canada, the land that turns out really awesome sci-fi horror films. Seriously, you're going to love Pontypool. Solely focusing on a small radio station team working through the possible horror that is unfolding outside, it's the not knowing that will leave you on tenterhooks. Is it zombies? A serial killer? Just a really bad Canadian snowstorm picking off sweet townspeople one-by-one? You'll have to watch and find out.

This neat little Australian found footage film features a monster that goes thump in the night, just like Stranger Things. When a news crew follows a lead to break open a possibly corrupt local government, what they find buried beneath the city leaves them running for their lives. It's absolutely the kind of scary found footage film you have been craving.

8. The House Of The Devil

Pure '80s horror in every sense of the word, The House of the Devil is one of atmospheric master Ti West's (Wayward Pines, V/H/S) earliest films. West goes the extra mile to infuse his babysitter-meets-devil worshipping couple horror flick with extra '80s touches, all the way from the clothes to the music.

Body horror never looked so poetic as it does in Spring. An American expat gets more than he bargained for when he falls in love with a mysterious and beautiful Italian woman. Things go from bad to worse when he finds out her horrible secret.

Stranger Things and Super 8 both recall the glory days of '80s films like E.T. and Stand By Me. There's nothing like watching a group of kids grapple with forces bigger than themselves, all while keeping the quips coming and the bonds of friendship strong.

A truly mind-bending sci-fi indie pic, Primer will leave you scratching your head the entire time. But don't worry: it's totally worth it.

A more meta, tongue-in-cheek take on the camp horror film, this film will have you rooting for lead Taissa Farmiga until the very end.

Are there any atmospheric horror or sci-fi flicks I left off this list? There's so many to choose from and so little time. Where to begin?

More like this
'Stranger Things' Finn Wolfhard Is “Proud” Of Noah Schnapp For Coming Out
By Sophie McEvoy
'Knock At The Cabin' May Start Streaming Sooner Than You’d Think
By Jake Viswanath
Reese Witherspoon Confirms This Fan Favorite Will Return For 'Legally Blonde 3'
By Jake Viswanath
Bennifer's Relationship Timeline Now Includes A Grammy Date Night
By Jake Viswanath
Get Even More From Bustle — Sign Up For The Newsletter
From hair trends to relationship advice, our daily newsletter has everything you need to sound like a person who’s on TikTok, even if you aren’t.