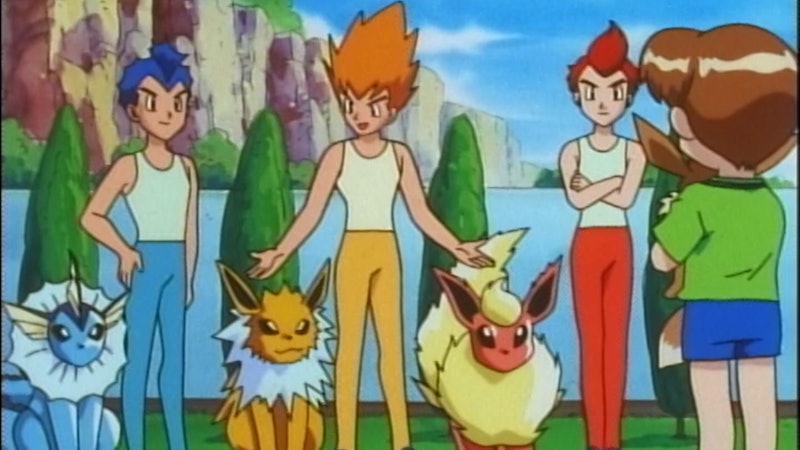 It's hard to believe "Pokemon Go" only launched on July 6 — within a week, the app was breaking records and ascending the downloads chart to the number one spot. And, with the sheer number of downloads, comes a corresponding level of geekery: There's enough old-school Pokemon fans using the app to have discovered some shortcuts. Over on Reddit, there's a thread devoted to how to control Eevee's evolution in "Pokemon Go." The key? Knowing enough about the original show.

See, Eevee is a pretty special Pokemon because instead of just one evolution, it can evolve into a number of other Pokemon. In the universe there are nine options, but in the game there are the original three: Vaporeon, Flareon and Jolteon. So, how can you ensure your Eevee becomes the Pokemon you've always wished for? Reddit user smithnigel claims that "if you nickname your Eevee either Rainer, Pyro or Sparky, your Eevee will evolve into that desired Eeveelution!" This makes sense, because, as he explains: "The Eevee Brothers from the original anime were named Rainer, Pyro, Sparky and they owned a Vaporeon, Flareon and Jolteon respectively."

So, it seems to follow that if you name your Eevee Sparky, you get Jolteon; if you name your Eevee Rainer, you get Vaporeon; and if you name them Pyro, you get a Flareon. If only life could be as simple as "Pokemon Go," right? According to this Reddit thread, multiple people have allegedly seen 100 percent success rates with this method, and it seems relatively simple. First go into your Pokemon and click Eevee. (You have to catch one first, of course, and earn the right amount of candy to evolve. In this case, 25.)

Ready for your Eevee-lution? Same. Click the pencil next to Eevee's name to bring up the edit screen.

And as outlined above, choose the name which corresponds with your preferred evolution.

I mean, who doesn't want Vaporeon? And then...poof! Like magic:

The Reddit thread does caution users to click out of the game and then re-open it to ensure the server registered the nickname before evolving just to make sure everything will work properly. But, that's it! Pretty cool trick, huh? Thanks smithnigel!

Now go out there, Pokemon hunters and conquer. But a warning for heavy users of the app: Sadly, this nickname policy does not apply to real life. Despite my attempts to persuade friends to rename me "Mark Zuckerberg" or "Carrie Brownstein," the world has not given me my preferred evolution into a Silicon Valley millionaire or my favorite comedian. But, hey, at least I can make a Vaporeon if I want so I don't have to cause a stampede over one in a park.